Can a united opposition defeat TRS in Telangana elections?

The Mahakutami may pose a tough challenge to TRS dominance in Telangana despite caretaker CM K. Chandrashekar Rao's popularity

New Delhi: From trading family insults to old rivals forming alliances, it has been a charged and eventful build-up to the Telangana state elections. By calling these elections six months early, K. Chandrashekar Rao (KCR), the acting chief minister and leader of the ruling Telangana Rashtra Samithi (TRS), was hoping to prevent his opponents from mobilizing a successful campaign. However, the move may have had the opposite effect. The Telugu Desam Party (TDP) and the Congress, once fierce rivals in unified Andhra Pradesh, along with other parties, have now formed a Mahakutami (grand alliance) to defeat the TRS.

In 2014, both the Congress and the TDP ran independent campaigns but lost to the TRS. As one of the main campaigners for Telangana’s formation, TRS rode the resulting goodwill to secure 63 seats and 34% of the vote share (chart 1a). Yet, it was not an entirely straightforward victory. In some constituencies, such as Suryapet and Mulug, votes were split between the Congress and the TDP, allowing the TRS to win even with a relatively low vote share.

If today’s Mahakutami had run for elections in 2014, Mint analysis suggests that it would have won enough seats (53 compared with TRS’s 50), including KCR’s seat of Gajwel itself, to result in a hung assembly.

However, the election victory was just the beginning of TRS’s domination of the state’s politics.

Since then, assisted by an accommodating speaker who did not invoke the anti-defection law, 27 MLAs have defected to the TRS in four years. Of these MLAs, 20 came from the Congress and TDP, which also helped unite the two rivals.

Adding important by-election victories, by the time the assembly dissolved in September, TRS had 90 seats or three-fourths of the assembly (chart 1b).

Much of TRS’s success came from rural areas where the Telangana statehood sentiment has been historically stronger. In areas with higher percentages of Andhra “settlers", such as the areas bordering Andhra Pradesh and the city of Hyderabad, other parties are more popular and were more successful. For instance, in Hyderabad, the home to a majority of the state’s 12% of Muslims, All India Majlis-e-Ittehad-ul Muslimeen (AIMIM) is the dominant party, securing seven seats with a massive 32% victory margin on average.

Conversely, in the more Hindu areas of the city, the BJP was more successful, winning five seats with an average 22% victory margin.

As a result, the TRS, TDP and Congress were restricted to the surrounding suburban seats (chart 2). The formation of Telangana has changed some of these dynamics.

In 2014, support for the TRS cut across castes, including forward castes, like the Reddys and Kammas, according to indicative data from a post-poll survey conducted by Lokniti-CSDS (chart 3). Even among other backward castes (OBCs) and scheduled castes (SCs), TRS was the most popular party. In the 31 reserved constituencies of Telangana, TRS won 18 seats, with an estimated vote share of 33% from SCs. With defections, this has now been consolidated to 25 reserved seats (chart 4). 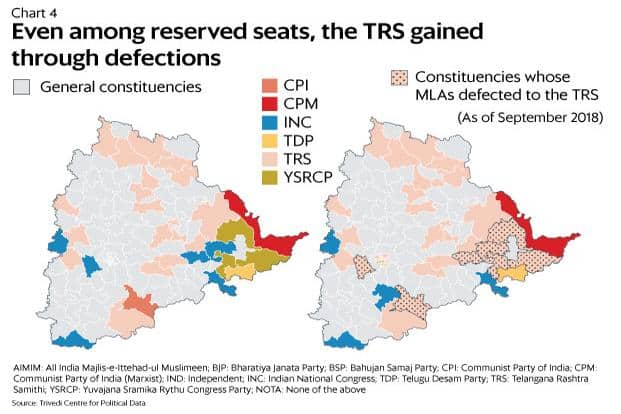 According to a 2014 study by the political scientist Pranav Gupta, a major reason for the TRS support across caste groups was the popularity of KCR. He was the first-choice for more than half the electorate, far more popular than the nearest Congress candidate.

Pre-poll surveys suggests that KCR has maintained this popularity, no doubt helped by a plethora of welfare schemes he has implemented in his tenure, as the first part of this series highlighted (bit.ly/2QxjDSw).

Yet despite this popularity, electoral mathematics and pre-poll surveys suggest a close contest between the TRS and the Mahakutami. The outcome could have important repercussions for the 2019 general elections.

Telangana contributes 17 Lok Sabha seats and in 2014 there was little difference between voting patterns for the state and the general election. Beyond this, a victory for the Mahakutami here could portend a grander Congress-led alliance at the national level.

This is the concluding part of a two-part data journalism series on Telangana. The first part examined the state’s performance under TRS rule.