Amarkantak, Madhya Pradesh: When Chandra Dev Singh was asked where he would stay in Amarkantak, a remote tribal town in Madhya Pradesh, the immediate answer that occurred to him was: “A tent."

That was in August 2008. The university he was going to launch in the town located on the border of Chhattisgarh did not have any official land allotted, no administrative staff, teachers, or even students. Yet it was, by all official pronouncements, India’s first central university for tribals, being launched to promote education and research among tribal communities.

Chamru Singh Banjara of the Baiga community studies by the light of an oil lamp at his cousin’s hut, where he lives. Difficulties with his eyesight prevent Banjara from studying at night, and he can’t afford a doctor’s fees.

A year on, Singh prefers to focus on the triumphs rather than the challenges he faced when launching Indira Gandhi National Tribal University (IGNTU). Half of the university’s 282 students are tribals from the neighbouring remote villages, and the university has a good record of marks and attendance despite several operational hurdles.

“We are getting somewhere. There are no regrets," he says, pointing to a full classroom.

Promise of a university in a state where 24% of the population is tribal soon brought IGNTU its unique set of students from villages in and around Amarkantak, where tribal communities such as the Gonds, Baigas, Kharias and Panikas live.

When Chamru Singh Banjara, son of a construction labourer from the Gond community, first enrolled at the university, he told his teachers that he would have been a daily wage earner with his parents at the upcoming Jain temple in town if it weren’t for the university. “My parents can’t afford to send me elsewhere for education. They can hardly manage to feed my four siblings," he says.

Today, Banjara ranks among the top five scorers at the varsity, and joins his parents every Sunday for work. “I build temporary shelters for construction labourers at the temple site and earn Rs70 a week," he says. He uses the money to buy himself notebooks and pens.

In its first year, the university admitted 282 students, 171 of them tribals like Banjara, for courses in arts, commerce and business administration. This year, 132 tribals have been admitted so far. 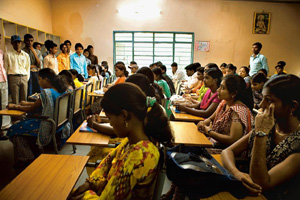 Tribal students in their classroom at IGNTU. The average classroom attendance at the university is 85%.

“These tribal children are the leaders. The only problem they face is with finances, due to which they aren’t able to reach their optimum level of performance. Some of the students cannot even buy food," says Janaki Prasad, lecturer in geography.

Shanti Chura, 21, whose widowed mother Sushila keeps ill and has left her at the Chakrateerth ashram for religious chores, says she didn’t expect to study further after completing her class XII in 2005. “I had resigned myself to cooking food and housekeeping at the ashram. There were no colleges nearby and I did not have money to travel several kilometres everyday to the nearest college in Anuppur," she says.

Rajendragram, 40km away, has a degree college where most students in Amarkantak who can afford higher education have traditionally gone for graduate studies. For those who are well off, colleges in Bhopal and Indore are popular destinations.

With IGNTU coming up in the town, students like Chura were the first among the beneficiaries. She enrolled at IGNTU as a student of commerce last year and topped her class. “At our university, tribal students have secured the top 10 positions in the annual exams last month," Singh says.

Most here prefer the traditional courses “since the very basic education is the biggest obstacle for them", he says. The university, which began with courses that involved “no practicals" due to a resource crunch, has introduced science courses from this academic year. 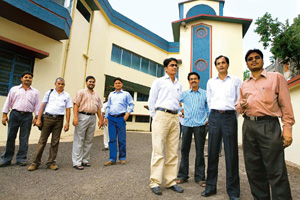 The teaching faculty on the porch of the Chandracharya Hospital, the makeshift campus of IGNTU. The university is run out of five rooms at the hospital.

Sanjeev Singh Sengar, officer on special duty at IGNTU, who accompanied Singh from Awadhesh Pratap Singh University, popularly known as Reva university, to Amarkantak, still remembers the day the first student stepped in, wearing a worn-out shirt and slippers, with queries about the university. “He came from a very remote village and had spent a hundred rupees on travel since this was the university closest to where he lived. We then realized the enormity of the task we had set out to accomplish."

The statistics challenging his newly assigned role were grim. After more than six decades of Independence, only 6.61% of students from tribal communities in India have access to higher education. That’s half the number that goes to colleges from non-tribal communities. In the case of girls, the gross enrolment ratio, a statistical measure used in the education sector to indicate the level of education at the primary, secondary, and/or tertiary levels, falls further to a mere 4.69%.

University officials had to literally go door-to-door to invite applications, since Amarkantak has no newspaper editions and the lone Raipur edition of Dainik Bhaskar, a Hindi daily, reaches the town only by late afternoon. Singh’s students from Reva university in and around Amarkantak distributed pamphlets and held street workshops to spread the word.

This, despite constant rumours that the university might move out of Amarkantak due to a delay in allotment of land by the state government. For a Central university to be set up, governments of the states where they are planned are required to allot 500 acres of land. For IGNTU, despite a budget of Rs275 crore, this has become a never-ending process, even though the Central gazette notification for the university’s establishment earmarks Amarkantak as the site. 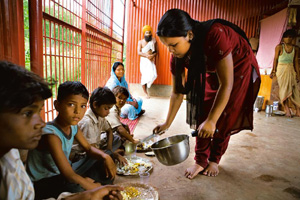 Shanti Chura (in red kurta) and her mother Sushila (in blue sari) were abandoned by Shanti’s father. Shanti lives and helps out at the Chakrateerth ashram, which serves free meals to visitors and the poor, and survives on donations.

The Manipur government so far has promised 300 acres of land for one of the university centres in Imphal.

The Madhya Pradesh government says it is finding it difficult to get 500 acres of land for IGNTU, citing varying reasons: that the point of origin of Narmada is too close, and its catchment area would be blocked; and that the sites being considered are forest land with precious herbs. State minister for higher education Archna Chitnis says the state government is trying its best to allot a suitable piece of land for the university. “We also have to make sure no damage is done to the environment," she says.

But beyond the ecological argument, the birth pangs of the university have been made more excruciating by the state’s internal politics, which have left IGNTU without a campus of its own. From launching with five rooms in a local hospital to running its hostels from buildings belonging to charitable organizations, IGNTU has battled ample government apathy, and some claim even hostility. “The state government has not only refused to allot (the) land requested, it even refused to allow classes to be held at the training centre of the state tribal welfare department here. The district administration even snapped water and power supply to the dharmashala where the varsity’s hostels were set up," alleges Himadri Muni, member of the Kalyan Seva Ashram trust that runs Kalyanika Kendriya Shiksha Niketan, a Central Board of Secondary Education school in Amarkantak. 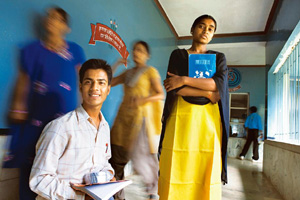 Amit Kumar Dwivedi (left) dropped out of a reputed university in Indore to join IGNTU because of its comparatively low fees. Rihala Devi Badwar (right), from the backward Panika tribe, attends classes at the university though her mother, who is a farm labourer, wants her to earn.

A section of religious leaders in Amarkantak, including Muni, who want the university to come up, say the state’s Bharatiya Janata Party government led by chief minister Shivraj Singh Chauhan wants to prevent the Congress from being credited with the institution as it might wean away tribal votes. The former human resource development (HRD) minister from the Congress, who conceptualized the university keeping in mind the tribal population, hails from the state.

IGNTU is now being run out of five rooms at a hospital run by the Kalyan Seva Ashram Trust in Amarkantak.

Since last week, though, Singh has been anxious. A site inspection team from the University Grants Commission, the regulator under the HRD ministry, is visiting the university this week. “But I have no land to show," the worried vice-chancellor says.