Who will bankroll India’s solar dreams?

All developers are looking to raise capital to complete their pipeline of solar projects, but investors and lenders want to be sure their returns don't run the risk of fizzling out

Mumbai: India’s solar dream of building 100 gigawatts (GW) of capacity by 2022 continues to garner massive interest from global investors, buoyed by the promise of strong returns. But it also faces financing challenges as investors become more cautious amid a fall in solar energy tariffs.

All developers, Indian or international, are looking to raise capital to complete their pipeline of solar projects in the country, resulting in massive equity requirement. International investors looking to benefit from the sunrise sector are often willing to pay a premium to snap up assets. But investors and lenders now want to be sure their returns don’t run the risk of fizzling out, if their projects turn unviable, analysts and consultants say.

“While the top-tier developers will continue to attract debt financing, we believe that projects with tariffs below ₹ 5 levels will face difficulties in debt financing as the lenders are becoming increasingly risk averse, particularly in the current environment when there is so much scrutiny around NPAs (non-performing assets) and quality of bank loan books," says Vinay Rustagi, managing director at renewable energy consulting firm Bridge to India. 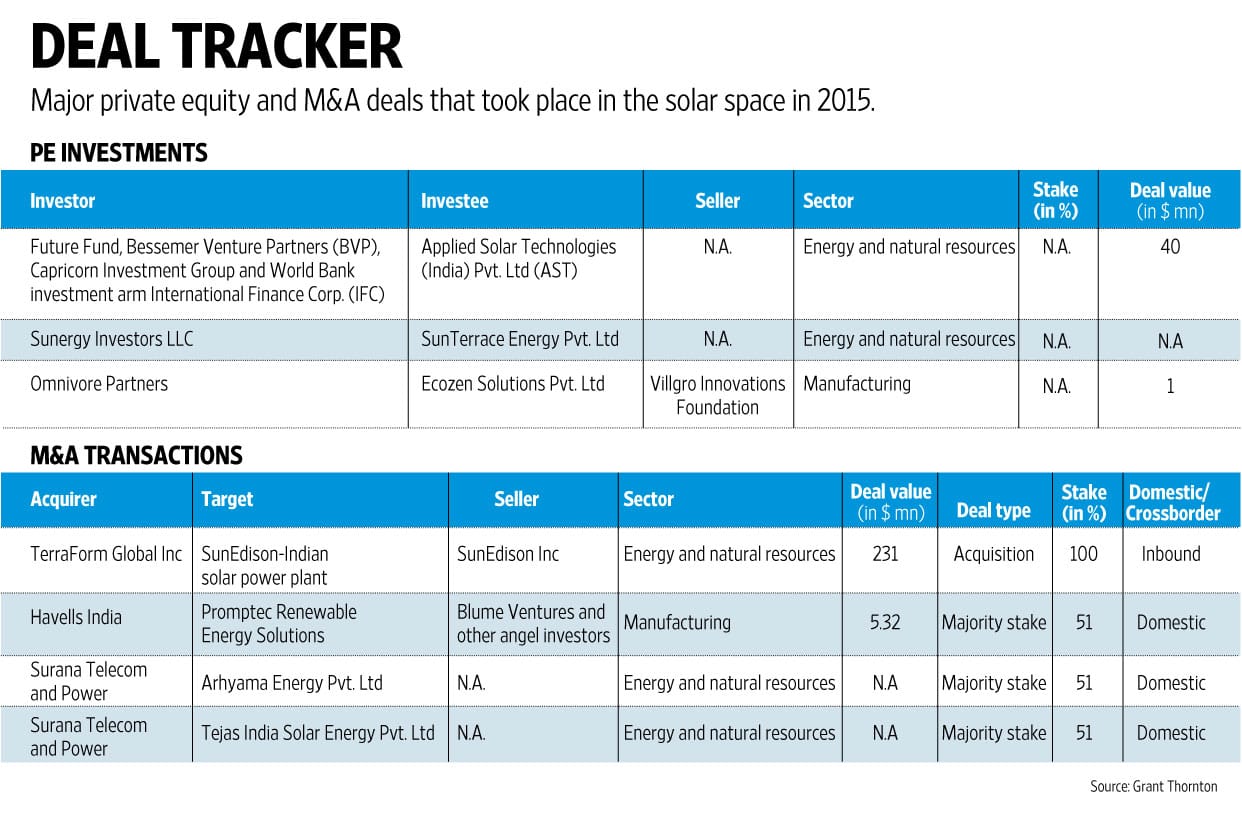 SBI, one of the largest lenders to infrastructure and power sector, has an exposure north of ₹ 6,000 crore in the renewables sector. The bank has financed 80 projects with a total capacity of 1,500 megawatt (MW) in the solar sector alone with an aggregate exposure of about ₹ 3,500 crore.

“We are looking at professional players and equipment suppliers who put their skin in the game and participate along with established players to set up projects which are viable. This would also help in setting the standards in this nascent industry. We are trying to arrive at a model, which mitigates most of these risks," SBI’s Shrivastava says.

The aggressive tariffs have become a major area of concern for investors. Solar energy tariffs have fallen from ₹ 15 over four years ago to below ₹ 5 per unit last year. The cost of modules has also fallen about 80% in recent years and developers have been banking their growth plans on cost of equipment continuing to come the down. SBI’s Shrivastava says the bankers will need to factor in these changes as well.

At ₹ 5 per unit, investors typically expect internal rate of return (IRR) of 15%, but that goes down to 10-11% if the project’s tariffs are below ₹ 5 and this is not attractive enough for Indian institutions, said Anubhav Gupta, analyst at Maybank Kim Eng Securities. “Every renewable power producer wants to build capacities rapidly over the next five years and is in need of capital, which could come from overseas investors. However, the aggressive bidding to win projects could lead to a situation similar to the roads or power sector in 2010-11, where companies wanted to aggressively expand at the cost of hurting IRRs. Today, nobody wants to set up a new thermal power plant and fewer companies want to build highways with their own money."

India’s solar energy sector attracted in excess of $278 million by way of private equity investments or M&A (mergers and acquisitions) transactions in 2015, according to data from Grant Thornton. The overall renewable energy sector raised $1.45 billion through M&A and private equity transactions in 2015, according to data from Equirus Capital, an investment bank. The country needs $200 billion to meet its target of setting up 100 GW of solar and 60GW of wind energy capacity by 2022 as part of the Narendra Modi-led government’s efforts to lower dependence on coal-fuelled electricity.

Utilities from the Middle East, Malaysia and Europe are keenly exploring opportunities to invest in the clean energy sector in India, which is one of the few high-growth markets, according to people familiar with the matter.

“The funding for solar energy projects from Indian institutions and the banking sector has been strong but there is a need to attract a new set of investors to Renewable Energy, including institutional and global—pension and sovereign wealth funds. Also, corporate bond markets and innovative structures such as securitization structures can be leveraged," said Gaetan Tiberghien, principal investment officer, infrastructure and natural resources, IFC South Asia.

IFC has been investing in India’s renewable energy sector since 2009 and its current portfolio in Indian wind and solar exceeds $700 million including about $340 million in financing mobilized from other sources.

“Returns expectations can be kept relatively low if risks are properly mitigated and the government has a big role to play in providing a supportive framework with adequate fiscal and/or regulatory incentives to move the renewable market toward a mature self-replicating phase. Concerns arise only if winning bidders make aggressive assumptions (for example, interest rates will only go down, high generation level, short payment cycle, no need for major maintenance, excellent transmission line availability) and/or when project quality is sacrificed to reduce costs. So, now even more than before, the lenders need to undertake careful due diligence before committing funds to a project," said Tiberghien.

There are two types of investors for the sector today, says Pashupathy Gopalan, president Asia Pacific at SunEdison Inc. The financial investors are happy coming in with even a minority stake while the strategic investors, who are already in the power business, are looking to invest with the intent of owning a controlling stake once the power purchase agreements (PPAs) allow that.

Gopalan says lenders are still keen to fund solar projects but may tweak their parameter and reduce the loan amount per MW to ensure they get their money back. This will mean developers will have to infuse more equity, he says.

Banks may still offer to lend, but the conditions attached to the loans are expected to get much tighter by way of lower leverage levels, higher cash cushions and greater parental support, according to Bridge to India’s Rustagi. “These challenges will in turn put pressure on the developers, many of whom are also struggling to raise equity capital for their projects."

Solar public companies in general have had a difficult time raising capital at depressed market valuations, according to Mercom Capital.

“From current development it becomes obvious that a number of solar companies have been very aggressive in their bidding and overstretched their capabilities. The “margin of error" in the bids seems to be too low. We are in a first phase of “market consolidation," which is healthy in some way, but will also create NPAs and stranded assets," says an offshore lender, asking not to be named.

India has added solar capacity at the fastest rate so far in 2016. With expected new capacity addition of 5.4 GW in 2016, India will become the fourth largest solar market globally this year, overtaking the UK, Germany and France, a report released in April by Bridge to India said. The country currently has nearly 6 GW of ready solar capacity and over 22 GW of wind capacity.

Solar projects, being won at record-low tariffs in government reverse auctions, are denting the returns for investors and in some cases could lead to financing constraints for projects under development, Mint reported on 15 April (story: bit.ly/22GBCCy).

Solar tariffs have remained below ₹ 5 a unit in reverse auctions since November, due to aggressive bidding by global companies such as US-based SunEdison Inc., Japan’s SoftBank Group, Canada’s SkyPower Global and Finnish state-run utility Fortum Oyj, all of whom want get a foothold in India’s high-growth renewable energy market.

Many believe the tariffs need to become rational in order to exploit the full potential of investments in the sector.