Chicago: He has read Ghost Wars, the history of the long adventure by the Central Intelligence Agency in Afghanistan and its fruitless effort to capture or kill Osama bin Laden. He has sought the counsel of an old Republican realist—Brent Scowcroft, the former national security adviser—who has long argued against an ideologically driven foreign policy.

And he has one-upped President Bush’s six intelligence briefings a week by demanding seven, prompting Mike McConnell, who handles presidential briefings as the director of national intelligence, to joke, “I don't know if there’s some kind of competition going." 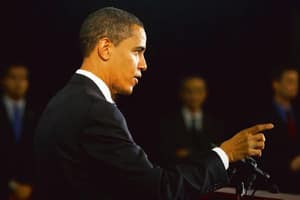 Quick study: Barack Obama at a recent Chicago press meet. As he gets ready to assume the presidency, Obama has been boning up on the many national security issues that await his first day in the Oval Office. Charles Dharapak / AP

John F. Kennedy, in his transition period, was meticulous about consulting his predecessor, President Dwight D. Eisenhower, about national security issues. In his, President Bush sought out Condoleezza Rice and other so-called Vulcans, his team of foreign policy experts, for cramming sessions.

“He has been voracious," one senior adviser said. He has had several long sessions, on the telephone and in person, with James Jones, whom he has named as national security adviser, in what the general has described as a “walk around the world".

On Monday, Obama went a step further, meeting for five-and-a-half hours with his national security team. In addition to Jones and McConnell, the assembly included vice-president-elect Joseph R. Biden Jr; secretary of defence Robert M. Gates, who is just back from a trip to Iraq;Hillary Rodham Clinton, Obama’s choice for secretary of state; Mike Mullen, the chairman of the joint chiefs of staff; Eric Holder, the attorney general-designate; and Susan Rice, Obama's pick for ambassador to the United Nations.

Perhaps surprisingly, Obama has also been seeking foreign policy guidance from some Republicans and conservatives. Besides reaching out to Scowcroft, Obama has also called former secretary of state George P. Shultz, a Reagan administration official who is known in some foreign policy circles as the father of the Bush doctrine because of his advocacy of preventive war. It is unclear what the two men talked about.

Obama has sought advice from Richard L. Armitage (Colin L. Powell’s deputy at the state department, who advised John McCain in the presidential campaign), Tommy Franks (commander of the Iraq invasion), and Joseph I. Lieberman of Connecticut, the one-time Democrat and now independent who supported McCain in the election and is known for breaking with Democratic criticism of the Iraq war.

But even as Obama moves to the centre, some classic liberalism has also become a part of his study programme. Obama, having finished Steve Coll’s Ghost Wars, is now reading Common Wealth: Economics for a Crowded Planet, by economist Jeffrey D. Sachs.

Sachs argues that big governments such as the US could successfully tackle global warming, environmental destruction and extreme poverty by refocusing just a small fraction of global income toward those issues.

Obama has also been making use of a military that he is soon to inherit as commander-in-chief. Three weeks ago, he called Mullen to Chicago for a 45-minute private session.

Like many presidents before him, Obama expects the early months of his term to be dominated by the economy, Democratic advisers said, and indeed, the proposed auto industry bailout and the recession have controlled how he has spent much of his time. But he has also quickly learnt—as his predecessors did—that issues of national security do not sit back and wait for the president to finish dealing with domestic policy.

“Mumbai was a little bit of a wake-up call," one foreign policy adviser to Obama said.

In the presidential campaign, Obama had spent far more time talking about Pakistan’s relationship with Afghanistan, particularly along the lawless border regions of the two countries, than Pakistan’s long-running dispute with India over Kashmir. The Mumbai attacks, which officials have attributed to the guerrilla group Lashkar-e-Taiba, which has been preoccupied with Kashmir, moved South Asia’s other simmering security crisis-in-waiting to the front burner.

On the day of the Mumbai attacks, Obama was in Chicago, getting ready to host 60 guests at his Hyde Park home for Thanksgiving the next day. He did not cancel his Thanksgiving plans, but ended up spending part of the day in briefings with two Central Intelligence Agency officials on the response to Mumbai. He called Rice several times to get updates about the crisis and the American response.

And that Friday, Obama placed a phone call to Prime Minister Manmohan Singh, ostensibly to offer condolences about the loss of life in Mumbai, but also, foreign aides said, to add his voice to the Bush administration officials trying to avoid a war between India and Pakistan.