New Delhi: State-owned Bharat Heavy Electricals Ltd (Bhel) plant in the holy town of Haridwar is facing constraints because the movement of the outsize equipment that it manufactures, almost comes to a standstill during the kanwariya pilgrimage season.

“A major part of our steam-based turbines are manufactured at our Haridwar factory in Uttarakhand. It is the backbone of our manufacturing," said a Bhel executive who did not want to be identified. “Due to the movement of the kanwariyas, the transportation gets affected."

The turbines weigh as much as 280 tonnes and are carried on trailers that have a length of 34 metres and a width of 5.5m. 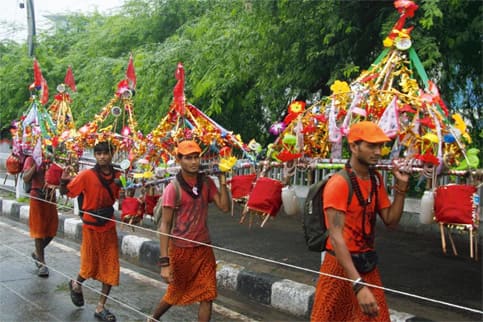 Limiting mobility: The movement of equipment from Bhel’s Haridwar unit almost comes to a standstill during the kanwariya pilgrimage season. Hindustan Times

The company has thus far failed to find alternative routes through which the equipment can be moved, said another Bhel executive who also requested anonymity. But that may soon change.

“There is another way, apart from the one which the kanwariyas take during their yatra (journey)," said an official in the department of heavy industries (DHI), declining to be named. “That route goes alongside a canal. We will work out something around that."

Kanwariyas, devotees of the Hindu god Shiva, travel from all over the country to Haridwar and Rishikesh in Uttarakhand in July and August to collect water from the river Ganga. They then walk back to their homes carrying the water, which leads to the roads out of Haridwar getting clogged.

An Uttarakhand state government official denied that the annual pilgrimage creates a two-month-long disruption. “At the most, the traffic gets affected for 15 days," he said.

The problem for Bhel is compounded due to delays in securing state permits for transporting equipment from its other manufacturing facilities across the country.

The issue has prompted cabinet secretary K.M. Chandrasekhar, the country’s top civil servant, to constitute a committee under B.S. Meena, secretary, DHI, to take up the subject with the respective agencies.

“We have a single-window system in the rail network. We are working to bring in a similar system in place on the roads as well to solve this problem," said Meena.

“While religious functions are important, it should be possible to make adequate arrangements with police help for the transportation of turbines," said former power secretary Anil Razdan.

Bhel’s problems were compounded with the National Highways Authority of India, or NHAI, banning the movement of loads weighing 100 tonnes or more on national highways. Subsequently, it was decided that NHAI would give clearance on a case-to-case basis, provided transporters ensured strengthening of all bridges.

“While we agreed to it, we don’t know what the carrying capacity of a bridge is. NHAI doesn’t have the info. Who does?" said the second Bhel executive cited earlier.

An NHAI official, who requested anonymity, said the restriction was aimed at preventing damage to roads and bridges. Sensors at various check points will measure loads on trucks, he said.

India faces a peak power shortage of nearly 12% and has an abysmal track record in adding capacity.

The country has a power generation capacity of 170,000MW. According to an internal analysis by the power ministry, a capacity addition of around 52,000MW in the current Plan is expected.

Mint reported on 27 May 2008 that India would miss around 13,855MW of capacity addition because of poor transport infrastructure.