Decentralization to be a key theme in Union budget

New Delhi: One of the key themes of the Union budget that finance minister Arun Jaitley will present at the end of February will likely be decentralization, which has been a constant in the development ideology of the Bharatiya Janata Party (BJP)-led National Democratic Alliance (NDA) government.

The budget may achieve this by accepting recommendations of the 14th Finance Commission that propose a fundamental change in the fiscal relationship between the centre and the states.

Its most important recommendation towards this is that the share of states in the centre’s tax revenue be increased from the current 32% to 42%—the single largest increase ever recommended, according to two people familiar with the development who asked not to be identified.

The recommendation, which the government will likely accept, needs to be seen in the context of two other developments, experts say.

One, the scrapping of the Planning Commission, which some claim took over a large part of the role of the Finance Commission in terms of allocation of revenue to states, and the creation of a new body, the Niti Aayog.

There has always been a belief in some quarters that the Finance Commission should be the one deciding how revenue is allocated to the states.

Two, the removal of the distinction between plan and non-plan expenditure. Both, say these experts, are important expenditure reforms. Media reports over the past few months suggest the second could also be one of the 14th Finance Commission’s recommendations.

The commission’s recommendation on a 10 percentage point increase in the revenue allocation to states gives more power to the latter in determininghow they spend this money (it also correspondingly reduces the fiscal resources available to the centre).

This fits in with the learning from several centrally sponsored schemes (the allocations to the states under these are a function of how well the states implement the schemes)—that states are usually not very fond of them.

Politically, the increase could also serve as a confidence-building measure, particularly relevant given that the centre and states are negotiating the introduction of a single goods and services tax (GST) under which the latter will forgo most of their taxation powers.

Finance minister Jaitley has repeatedly argued that one-size-does-not-fit-all and that states should be given greater say in how they spend the funds. In his first Union budget presented in July 2014, Jaitley accelerated the process of decentralization by increasing transfers to states for funding of centrally sponsored schemes by 50% to ₹ 7.9 trillion.

This process, based on the recommendations of the B.K. Chaturvedi panel, was undertaken by finance minister P. Chidambaram in his interim budget presented just before the 16th general election. 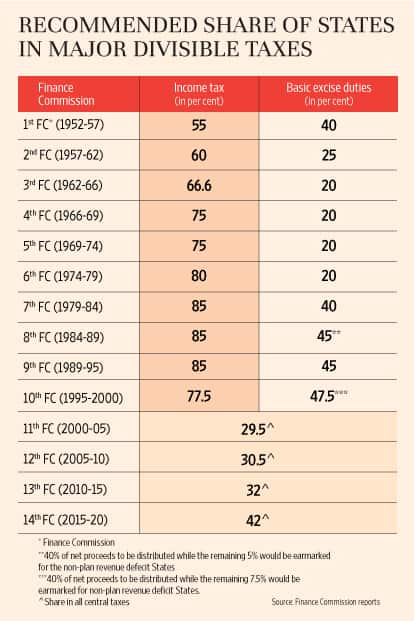 This, experts say, is one more indication that Jaitley will accept the recommendations of the Finance Commission, headed by former Reserve Bank of India governor Y.V. Reddy.

Arvind Virmani, former chief economic adviser in the finance ministry, said the 10 percentage point increase in the share of states in the centre’s tax kitty is more than the usual increase recommended by the earlier Finance Commissions.

Accordingly, the 11th Finance Commission, which was set up immediately after, recommended a share of 29.5% for states from the divisible pool.

The commission has also proposed discontinuing the special grants reserved for so called backward regions like Bihar.

D.K. Srivastava, chief policy advisor at consultancy firm EY and a member of the 12th Finance Commission, said the sharp increase in the states’ share of central taxes would structurally change the centre’s ambit of policy intervention.

“The centre will have much less to spend for its own programmes through its ministries and departments. On the other hand, states will get larger autonomy with their finances and states’ diktat in their schemes and programmes will almost end," he added.