Home / Politics / News /  The grass less green
Back
Share Via

I am the grass; I cover all.

Carl Sandburg’s line on the omnipotence of grass is appropriate when one considers that a majority of India’s population depends primarily on grass and its species—wheat, rice, corn, etc.—for sustenance.

But what surprises Bangalore-based photographer Kalyan Varma, 32, is the alarming level of ignorance that shrouds our grasslands. Here is a biome teeming with an abundant variety of fauna—harriers, blackbucks, hyenas, swamp deer—invaded recklessly by extraneous forces ill-informed about the way this everyday ecosystem functions. 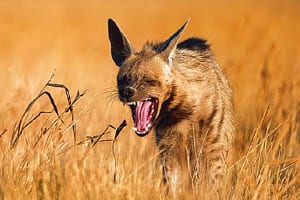 A hyena at the Velavadar National Park in Gujarat (Kalyan Varma)

“The forest department still sticks to its primitive policy of protecting resources like trees for timber, a remnant of the imperial past," he says. A report of the task force on grasslands and deserts, appointed by the Planning Commission in 2006, states, “Grasslands are not managed as an ecosystem in their own right by the forest department whose interest lies mainly in trees, not by the agriculture department who are interested in agriculture crops, nor the veterinary department who are concerned with livestock, but not the grass on which livestock depends," and as such grasslands “belong to all, are controlled by none, and they have no godfathers."

Hessarghatta is a classic example of this. The grassland has lately been invaded by trees forced on to its arid ecosystem by an administration intent upon greening the area. “But that’s not the natural system," says Varma. “The animals aren’t used to these trees and cannot survive in this new habitat."

Quite simply, grasslands need to be left alone. The lack of vegetation on these grasslands led the administration to declare them wastelands. However, the fauna in such habitats can prosper only in the environment it has been accustomed to.

“The trouble is that these grasslands are found in patches and don’t occupy vast tracts of land," says Varma. If they did, they would have been brought under a protective umbrella by being declared sanctuaries or national parks. The Kaziranga and Kanha national parks in Assam and Madhya Pradesh, respectively, and the grasslands they shelter, serve as examples. These provide a safe haven for many species of wildlife.

The sprightly blackbucks of Velavadar, documented extensively by Varma this year, offer a delightful glimpse of the habitat’s fauna. The male, adorned by a pair of spiralling horns, and the female, hornless with a light-coloured coat, jounce across the 34 sq. km expanse of the park. Their unique mating activity, termed lekking, begins with the male marking his territory with its faeces. Called leks, these markings signify the power of the male, with the lek that occupies the centre rendering its owner the most sought after male of them all. This because it has to ward off and jostle with more males to occupy that position. Authority thus established, the females flock to this male, often fighting among themselves to mate with him. “Usually in the animal kingdom, the females have no choice," says Varma. “But here they do. They decide whether to mate or not."

Some of the habitats of these blackbucks, or the hyenas and bustards that call them home, are now threatened by commercial activity such as planting exotic species of trees, building parks and golf courses. “All the forestry projects or anything that sees the grasslands being handed over for alternative land use need to stop," says Varma.

The grass needs to be left to its own devices to flourish, much in the way Sandburg’s poem concludes:

I am the grass/Let me work