The environment ministry said in a statement that it would undertake cleaning riverfronts and beaches of plastic litter, in as many as 19 states, including nine coastal states

New Delhi: As many as 48 stretches of riverfronts and beaches in the country will be cleaned up ahead of World Environment Day on 5 June, the government said.

The environment ministry said in a statement that it would undertake cleaning riverfronts and beaches of plastic litter, in as many as 19 states, including nine coastal states. This is in line with this year’s theme of World Environment Day on beating plastic pollution, identified as a global emergency by the United Nations in 2017.

Even as increasing pollution in water bodies continues to raise concerns, officials said dredging plastic waste from riverfronts and the coastal line would help solve the larger problem, as most of the plastic waste washes into the rivers and oceans.

A recent water quality assessment indicated that there are 302 polluted stretches on 275 rivers across the country. 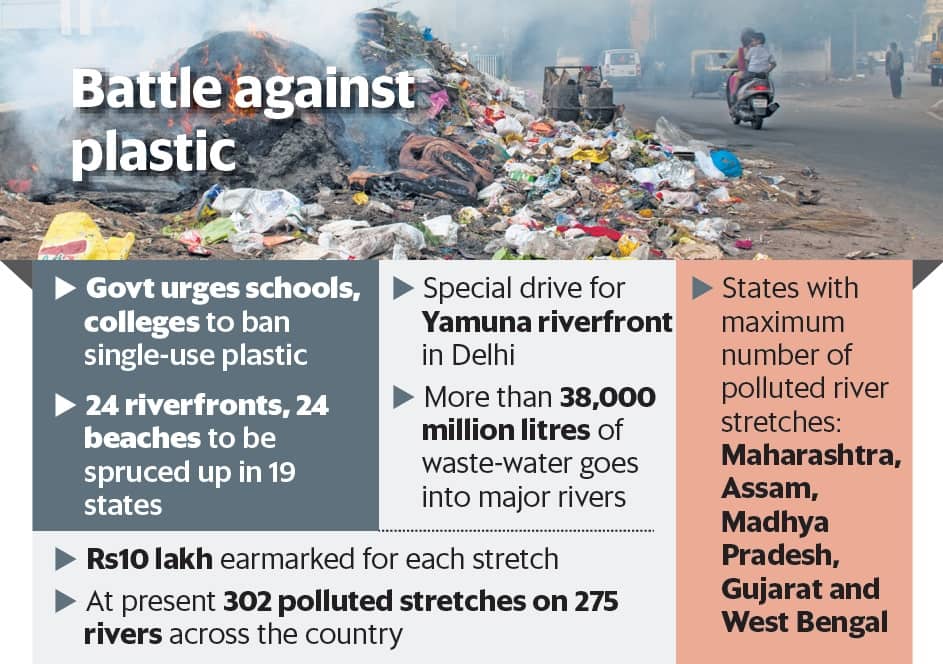 The most polluted riverfronts include Ghaggar in Haryana, Satlej in Punjab, Hooghly in West Bengal, Cauvery in Karnataka, Narmada in Madhya Pradesh and Ganga in Kanpur and Varanasi.

Some of beaches identified include Kannur and Calicut beaches in Kerala, Puri in Odisha, Calangute, Miramar and Colva in Goa. Nearly Rs10 lakh has been earmarked for each stretch.

A total of 19 teams headed by senior officers of the ministry of environment have been formed for each of the states, which would include members of state nodal agencies, and members of the State Pollution Control Boards.

“We identified the water bodies after consulting the state nodal agencies and the college of fisheries," said an official, adding that a special cleanliness drive would be organized for the Yamuna stretch in Delhi.

As part of a pan-India initiative to ban plastic, the Union minister for environment Harsh Vardhan also urged schools to declare them free from pollution caused by single-use plastic, which would require students not to carry plastic water bottles, cups, folders, plastic plates and pen stands.