The other Partition and the stickiness of labels

Liberalization has bridged the country's socioeconomic divide, but the perception of a few statesas regressive has not changed

Everyone knows of the Partition: a single, epochal event that created distinct identities memorialized everywhere— from atlases to history books. However, while Pakistan (including what is now Bangladesh) became a separate nation in 1947, what was left as India by no means homogenous. Language, culture, customs, practices, resources, opportunities, income and wealth varied widely across the country—best captured in economist Joan Robinson’s pithy statement: “Whatever you can rightly say about India, the opposite is also true."

There was another partition, and it was different. It was undeclared and, many would say, an unintended consequence of central policies. It acquired an evocative but misunderstood label that is hard to lose despite trends to the contrary. This second partition cleaved India into two socioeconomic halves: one progressive and forward-looking; the other stagnating and stuck in the past.

Many labels were used to describe the other partition: a “vertical line through Kanpur", the cow belt versus the rest and, perhaps the stickiest of them all, BIMARU states. The term, coined more than three decades ago by noted demographer and economic analyst Ashish Bose, clustered Bihar, Madhya Pradesh, Rajasthan and Uttar Pradesh together based on demographic indicators. Bose found that these states were contributing to the country’s population explosion as they held more than 40% of India’s population. The press adopted and,over time,morphed the term which came to imply acute economic underperformance and bleak prospects.

A host of reasons were advanced for the socioeconomic stupor: the resource curse, the freight equalization policy, an inability to break through regressive societal structures, etc.

But with liberalization, the economic profile changed for the better, though the way the states were perceived didn’t.

First, growth opportunities that liberalization threw up were seized (beginning at different times) by Bihar, Rajasthan and Madhya Pradesh, which have been among the fast-growing states of the last decade. Rajasthan, for example, began to register impressive growth in late 1990s driven by investments in areas such as renewable energy and tourism (its traditional strength).

Second, carving out smaller states from these giants and better governance helped: it allowed for de-averaging both the problem and the solution. The most dramatic illustration comes from comparing Uttar Pradesh with Uttarakhand. The 2013 Raghuram Rajan panel, tasked with developing a composite index of development, came out with a Multi-Dimensional Index (MDI), which put Uttarakhand among the top six “relatively developed" states whereas Uttar Pradesh was ranked among the “least developed".

The third factor, and by no means is this list exhaustive, was the devolution of political power to local governments. The transfer of staff, funds and operations to local citizen groups have enabled better public goods outcomes. States obviously progress at varying rates, but the direction is clearly set. Bihar, for example, has seen increasing women empowerment in panchayats and local bodies.

Such broad changes require a concomitant perceptual shift. It is time to ditch the old label, and put in place a paradigm that will allow policy and business decisions to be fit-for-purpose in light of the revised data and better socioeconomic profile. Such a model also needs to recognize and express the increased divergence in the growth and development of these states and the formation of new clusters.

In our work at Bain, an alternate framing has been devised (see figure 1). The positive labels of “India Breakthrough", “India Emerging" and “India Steady" capture the spectacular differences between, say, a Bihar and an Odisha in terms of growth and prospects. 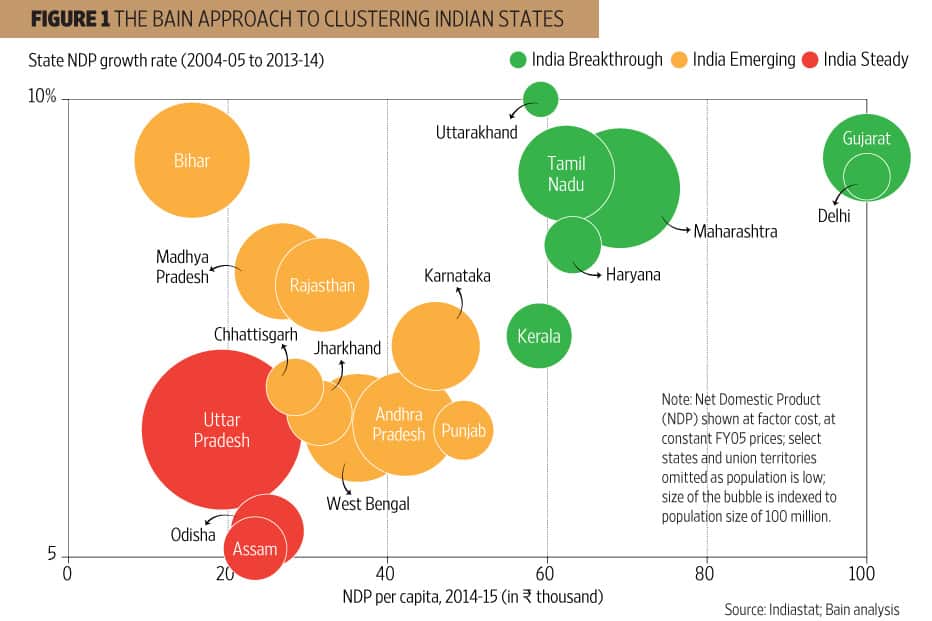 The framework also illustrates the significant gap in affordability and, hence, the current market attractiveness of the India Breakthrough states. India Breakthrough represents a clear and present opportunity for share gain and market penetration, while India Emerging is the next wave, where companies will have to think strong and hard about unlocking potential.

A second-order learning is of periodically re-evaluating labels. Growth and development outcomes for states are not linear or pre-ordained. Yes, some trends are locked in: for example, greater devolution of powers to local bodies, higher aspirations of a younger electorate and, arguably, a gradual shift towards electoral rewards for better governance. The most important among these trends is the double-hump nature of India’s demographic dividend—loosely speaking, a north that stays young over the next few decades while a south that starts to age. The first hump of India’s demographic dividend came from the south. As this ebbs, a second and larger hump will come from the northern states.

Key to determining whether this is a demographic dividend, or nightmare, will be the ability to create jobs and equip the young population with skills to participate in growth. Disadvantaged states have historically been on the lower end of the curve in the human development index (HDI). And though a lot has happened over the last few decades (see figure 2), a lot more needs to be done. 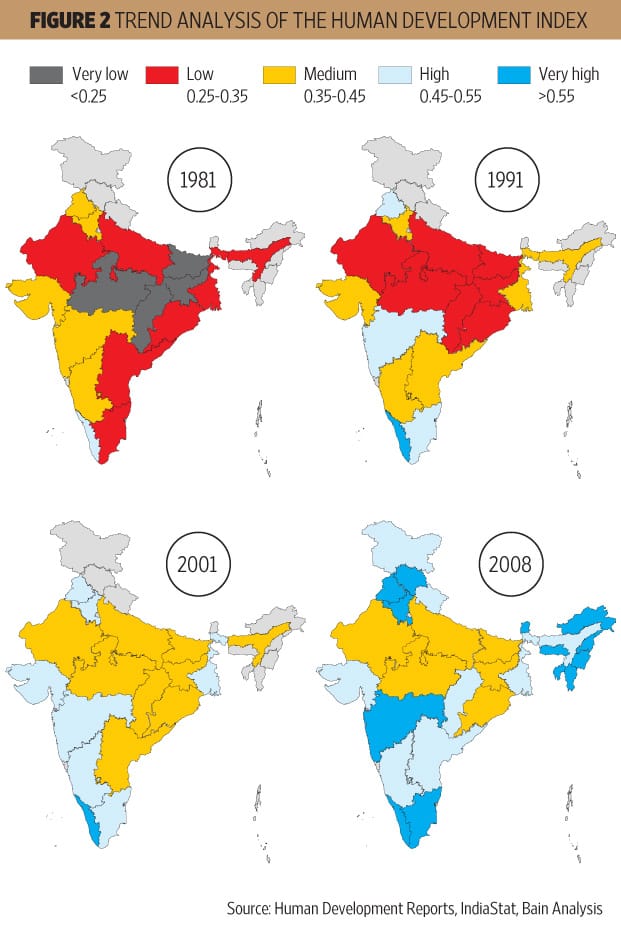 The most important task for the government is clearly laid out: it has to meet the twin objectives of skill development and job creation along with investment for improvement in HDI. The first goal has received attention, but the need for concomitant social investments is still not understood. That might be a final lesson worth taking from the erstwhile BIMARU states.

Businesses also need to come up with more nuanced perspectives. A pan-India approach no longer fits, and uncertainty is a constant; hence, a re-evaluation of strategy is required. A model built around the creation of homogenous clusters of states makes room for flexibility and allows strategy to be fine-tuned to varying needs. A coherent, robust strategy in times of uncertainty shifts the spotlight to the underlying critical gaps, for example, in job creation and skill development, as opposed to factoring in only the outcomes of GDP growth.

Socially important sectors, such as health and education, represent an opportunity for unlocking latent demand. New innovative models can help firms unlock this potential at lower affordability. Such changes in business mindsets will usher in a more expansive view of new opportunities and better mitigate risks in an uncertain environment. We may even hope that they will make strong prosperous bridges for the plural economic and social realities of India.

Nikhil Prasad Ojha is a partner with Bain and Co. and the co-editor of the Mint-Bain series on 25 Years of Reforms.

Parijat Ghosh is a partner with the firm and a member of Bain’s Healthcare and Industrial Goods and Services practices.