New Delhi: US secretary of state Condoleezza Rice is arriving in New Delhi on Wednesday to demonstrate solidarity with Mumbai’s victims of terror, and try and ensure that renewed India-Pakistan tensions don’t escalate into a conflict between the neighbours.

Prime Minister Manmohan Singh’s government is hoping the visit, capping three phone conversations he had with US President George W. Bush in the last three days and one with President-elect Barack Obama, will send a strong signal to Pakistan to crack down on rogue terrorist groups operating from its soil. 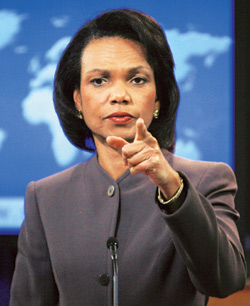 At least 28 of the 183 people killed in the attacks were foreigners, including six Americans, eight Israelis, three Germans, two French and one Briton. But there are also victims from smaller nations such as Mauritius, which lost a former executive director of the State Bank of Mauritius, Shaitlall Guness, in the attack.

Several foreign intelligence and security agencies are already camping in Mumbai—including the US Federal Bureau of Investigation, the Israeli Shin Bet, the German Federal Police (BKA) and the British Scotland Yard—hoping to soon begin the arduous task of collecting evidence from the scene of crime in collaboration with their Indian counterparts.

Mauritius’ case is particularly interesting since a Mauritian identity card, said to belong to one of the terrorists, was recovered from the Taj Palace and Tower hotel, along with identity cards belonging to other countries and credit cards from several banks.

Mauritian high commissioner to India Mukeshwar Choonee told Mint that his country was particularly concerned about the alleged identity card recovered from the terrorists in the Taj Mahal hotel, but said he heaved a sigh of relief when it turned out to be fake. Asked if Mauritius had asked New Delhi to share evidence on the identity of the attackers, Choonee said he was “sure" that Prime Minister Navin Chandra Ramgoolam had spoken to Prime Minister Singh for help in this matter.

Rice is expected to use the trip to prevent tensions from escalating and assuage Indian anger over the alleged Pakistani links of the terrorists who attacked Mumbai. Pakistan is a US ally in the “war against terror" in neighbouring Afghanistan.

But it is also clear that India has ruled out a military option against Pakistan, especially since both are nuclear-armed states. Moreover, said Wilson John, a Pakistan analyst with the Observer Research Foundation, “if India bombs Pakistan you can be sure that America’s global war on terror will collapse in 15 seconds, as the Pakistanis pull troops away from the western border to the eastern front. Instead, without launching a military offensive, Delhi has to mount a worldwide diplomatic campaign and create a coalition that puts pressure on Pakistan to arrest these terrorist groups that freely roam the country".

A senior government official agreed that the decision to share intelligence with Western agencies was part of the plan to divide both credit and responsibility. India’s ambassador to the US Ronen Sen is in close touch with the Bush administration as well as President-elect Barack Obama’s team to ensure that Bush’s personal interest in India, manifested in Rice’s visit on Wednesday, transits to the Obama team.

Rice, who comes to New Delhi from a Nato meeting in Brussels, told accompanying reporters that she doesn’t “want to jump to any conclusions myself on this, but I do think that this is a time for complete, absolute, total transparency and cooperation and that is what we expect", Reuters reported, citing her comments on what the US expected from Pakistan.

Meanwhile, ratcheting up the pressure on Pakistan, New Delhi summoned Pakistan high commissioner to India Shahid Malik to South Block to protest the “emerging Pakistan link" in the Mumbai terror and reiterate that it must abide by its oft-stated promises not to allow its soil to be used in any anti-Indian activities.