New Delhi: Prime Minister Narendra Modi on Sunday said that infrastructure was a key priority sector and his government spent over Rs3 trillion on national highways alone, besides allocating Rs5 trillion for the Bharatmala project, aimed at improving road connectivity across the country.

Modi was addressing a rally at Uttar Pradesh’s Baghpat after inaugurating two important highways—the first phase of the 14-lane Delhi-Meerut Expressway and the Eastern Peripheral Expressway.

The PM said that infrastructure was a priority because it did not discriminate against people on the basis of class, caste or gender, and strengthens his commitment to Sabka Saath, Sabka Vikaas.

He said all the four modes of transport – highways, railways, airways and inland waterways – are making rapid progress. “Highway construction has reached 27 km per day as against the 12 km per day recorded during the Congress regime." Modi added a day will come when products manufactured in Uttar Pradesh will be directly transported to sea ports through inland waterways. 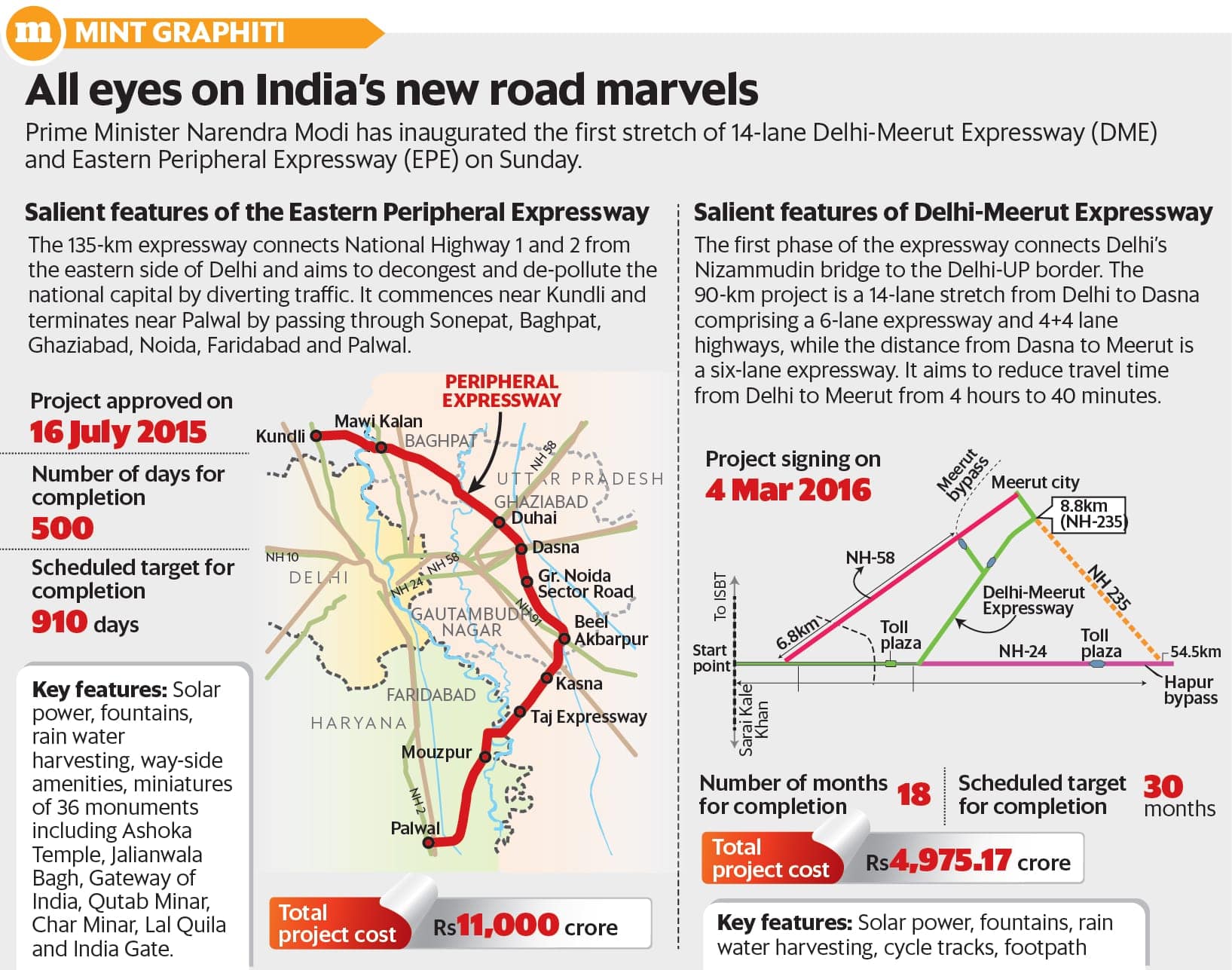 Regarding sugarcane dues in Uttar Pradesh which has become a political issue in the upcoming Kairana bypoll, the PM said his government is sensitive to the famers’ plight and has taken adequate steps to provide proper prices for their crop. He also lauded the efforts of Uttar Pradesh chief minister Yogi Adityanath, stating that criminals in the state are now surrendering and pledging not to indulge in illegal activities.

The Eastern Peripheral Expressway was built at a cost of ₹ 11,000 crore to decongest Delhi’s traffic, while the Delhi-Meerut Expressway will reduce the commuting between the two cities from four hours to 45 minutes, once completed.

Notably, on 10 May, the apex court had directed the National Highways Authority of India (NHAI) to open the EPE for the public by 31 May, even if it failed to get the project inaugurated by the Prime Minister. The Eastern and the Western Peripheral Expressways were planned in 2006 following a Supreme Court order to divert traffic bound for destinations other than the national capital.

Speaking on the occasion, minister for transport and highways Nitin Gadkari said that the EPE will reduce pollution by 27% and traffic jams by 41% in Delhi. He lauded the work of the NHAI officials, stating the highway was built in a record 500 days.

On India’s first 14-lane highway, Gadkari said his ministry will try to complete the Delhi-Meerut expressway by March 2018. The two-project will be a relief for people across Jammu and Kashmir, Punjab, Haryana, Uttrakhand, Uttar Pradesh and Rajasthan.

Gadkari also announced that the Delhi-Saharanpur Highway will be built on the EPE pattern and the foundation stone of the Rs7,000-crore Dwarka Expressway will soon be laid by the PM.