Athens: Greek party leaders were struggling on Tuesday to agree on a new prime minister, under pressure from the European Union to push through a bailout to save the country’s finances and end the chaos threatening the euro.

After early signs that agreement on a new national unity coalition could be reached quickly, the drive by the socialist and conservative parties to create a government that will rule only until February appeared to be losing momentum. 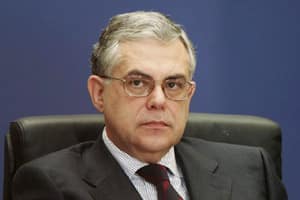 Former deputy head of the European Central Bank Lucas Papademos looks on during a news conference in Athens in this 6 October 2005 file photo. Reuters

“Today is the last chance for the two main parties," centre-left daily Ta Nea wrote in an editorial. “They have to come up with a government strong enough to take the country out of the moving sand of political impasse that leaves us defenceless, at the mercy of the crisis. Time is up."

The cabinet will hold an emergency session on Tuesday and officials said negotiations were under way on the “100-day coalition" which must win parliamentary approval for a euro zone bailout and save the country from bankruptcy.

Frustration was also apparent in Brussels where officials said the new government had to show it was serious about implementing promises Athens has made to its EU and IMF lenders in return for the €130 billion bailout.

“It is essential that the entire political class is now restoring the confidence that had been lost in the Greek commitment to the EU/IMF programme," said EU Economic and Monetary Affairs commissioner Olli Rehn.

Prime Minister George Papandreou caused chaos last week by calling a referendum on the bailout, a vote which would probably have rejected the package because of the austerity measures tied to it. Papandreou backed down, but was forced into agreeing to make way for the unity coalition.

Weary of broken promises from Athens, Rehn said the coalition must “express a clear commitment on paper, in writing, to the EU/IMF programme".

The stakes could not be higher. Greece faces bankruptcy in December when big debt repayments are due, unless it can get hold of more emergency funding soon. For the euro zone, it is a question of credibility with international financial markets.

For two years it has laboured to solve the problems of Greece, a very small part of the bloc’s economy, leading to doubts about how it would manage if the debt crisis engulfed the far bigger Italian or Spanish economies.

What is now a regional crisis could hit the global economy if it goes unchecked, and the United States weighed in with a demand that Greece live up to its responsibilities. “We urge the government to move as quickly as possible to fulfil the commitments," said White House press secretary Jay Carney.

Greek party officials were tight-lipped about why the naming of the new prime minister, which had been expected on Monday, had not yet happened.

Papademos remained a frontrunner for prime minister. An aide said the Greek economist, who left the ECB in 2010, had arrived in Athens on Monday from the United States where he is a Harvard academic.

Papandreou has been in touch with Papademos, a senior government official told reporters.

Papademos oversaw the nation’s adoption of the euro in 2002 as Bank of Greece governor before moving to the ECB, and is a well-known figure in European capitals.

Some Greek media speculated that he was setting tough conditions, demanding greater powers than Papandreou or conservative leader Antonis Samaras were prepared to give.

A source at the New Democracy party which Samaras leads said it would support the new government but wanted no cabinet posts.

Current finance minister Evangelos Venizelos, a member of the PASOK socialist party, could stay in his post for the sake of continuity, said the source, giving the first indication of who would occupy any of the cabinet posts.

New Democracy would back the 2012 budget and a bond swap plan contained in the bailout package, under which the value of banks’ holdings of Greek government debt would be halved.

However, PASOK had to hand certain major ministries -- including any involved in running next February’s elections -- such as justice, the interior and even defence to non-party technocrats, he said.

Some Greek media said such demands were a sticking point, with PASOK unwilling to let New Democracy duck out of a government which must take unpopular decisions to tackle the huge budget deficit and make the economy more competitive.

Greeks have suffered in the two years that Papandreou ran the country. International lenders have demanded wave after wave of pay and pension cuts, plus tax increases and job losses in return for emergency aid. This has helped to keep Greece in four successive years of recession.

The Communist PAME labour group will hold a rally in Athens on 10 November to oppose a new government which it said “has the task to save the monopolies and crush the popular movement".

“They want to vote through the new bailout ... which will leave Greek people with their hands tied for many years."