Addis Ababa: Ethiopian Prime Minister Meles Zenawi, regarded by the West as a bulwark against Islamic militancy, died while being treated abroad for an undisclosed illness, the government said on Tuesday.

Speculation that the 57 year old strongman, an ally of Washington who twice sent troops into neighbouring Somalia to help crush rebellions, was seriously ill had grown after he failed to attend an African Union summit in Addis Ababa in July.

“After attending medical services abroad, the prime minister passed away around midnight. It’s time for his remains to come back in Ethiopia," government spokesman and Meles’ right-hand-man, Bereket Simon, told reporters in the capital. 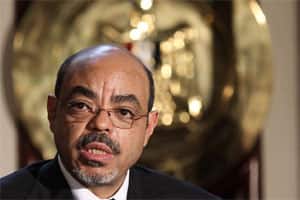 Meles seized power in 1991 from Mengistu Haile Mariam’s military junta and went on to become a towering political figure on the continent. He was considered a leader the West could count on in its fight against al Qaeda-linked groups.

He was also widely credited for steering one of the world’s poorest countries to sustained high economic growth but he cracked down hard on dissent and his image abroad was tainted after he jailed opposition leaders following the disputed 2005 election.

Ethiopia’s government said in July that Meles was taking a break to recover from an unspecified condition. Diplomats in Addis Ababa had said Meles was being treated in Brussels for an undisclosed illness, while others said he was in Germany.

Some opposition media have said he died in July.

Bereket, who declared a time of national mourning until Meles’ body was returned, was quick to assure citizens of Africa’s second most populous the country was stable and would continue on the path charted by Meles.

The ruling party will meet to select a permanent successor, although a date has not yet been set.

“I believe that any successor to Meles will focus first on domestic issues and for the most part leave the regional and international engagement to other countries, at least until the new leader is firmly established in office," David Shinn, former US ambassador to Ethiopia, told Reuters recently.

“For internal security reasons, there will be a continuing focus on Somalia and I do not foresee any significant change towards Eritrea," he said, referring to Ethiopia’s arch-foe with whom it fought a decade-long border war.

He was widely applauded for ploughing money into infrastructure but criticised by some for selling off swathes of land to foreigners. Many Ethiopians complain that while he has forged closer business ties with China that did not translate into more jobs for Ethiopians.

“While life remains a struggle for many Ethiopians, millions of others have been lifted out of abject misery in just a generation," Africa expert, J. Peter Pham of the Atlantic Council think-tank, said.

“Anyone who has visited the country more than once notes the transformation taking place constantly as infrastructure is built out and will remark on the dynamism of the people."

No tolerance for dissent

However, international rights groups say Meles was intolerant of dissent. He rounded up opposition leaders after the disputed 2005 polls and several opponents and journalists have been arrested under a 2009 anti-terrorism law.

“Today is a day of joy for most Ethiopians and all freedom loving people around the world," opposition website Ethiopian Review said, describing Meles as a “genocidal tyrant".

Acting PM Hailemariam, 47, was an advisor to Meles in 2006, before being picked as his deputy in 2010, an appointment met with surprise because of his relatively young age.

He had also replaced Meles as chair of a number of parliamentary committees in the past few years, a tell-tale sign of grooming, diplomats say.

“It’s a pity, he never had a day’s rest since he came to power. Meles had his good and bad side, but was a much better choice than any of the other existing politicians," taxi driver Alemayehu Mesfin, said. Reuters