New Delhi: Turnout, analysts say, may hold the key to the outcome of the upcoming Delhi assembly elections, which looks increasingly like a direct face-off between the Bharatiya Janata Party (BJP) and the Aam Aadmi Party (AAP), with the Congress nowhere in the picture.

Interestingly, the analysts differ over which of the two main parties will benefit from an increase in voter turnout.

“Higher turnout would indicate more middle class coming out to vote. In the previous assembly election, it helped the AAP but this time it is this section which is the most disillusioned with the party’s street politics, and most voters from this section have shifted to the BJP. So, if the turnout out of the middle class is high, it will help the BJP," Jai Mrug, a Mumbai-based political analyst, said. 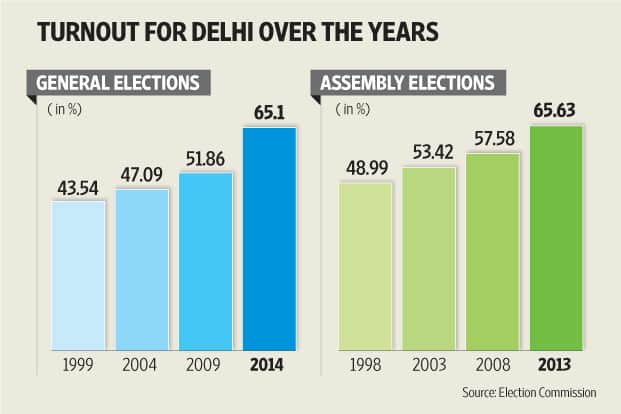 Kumar said people from economically weaker sections are discouraged from coming out to vote if there is no holiday on polling day and because of a lack of permissible identity cards. “If they don’t turn out to vote in big numbers then it is an edge for BJP. So, AAP has to do something to mobilize these voters."

Mrug said a lower turnout would benefit the AAP owing to a consolidated support base.

Still, both agree that the turnout is important. “The key to this election is the turnout. In the last two or three elections we have seen an upward trend in the turnout. The turnout in big cities. like Delhi, is (usually) low because the bottom of the pyramid don’t turn out to vote in big numbers," Kumar said.

In both the cases, the BJP benefited. While it won all seven Lok Sabha seats in 2014, it emerged as the largest party in December 2013. The AAP, too, benefited in 2013, winning 28. In the 2013 assembly elections, the turnouts were high enough to keep polling booths open till 9pm, well past the 6pm closing time.

Still, this is the third election for Delhi voters in a span of less than 15 months; the turnout may also depend on whether or not there is voter fatigue.

While the BJP traditionally has the support of the middle class and the business community, the AAP’s major support-base rests on the economically backward classes which it has lured away from the Congress.

Delhi goes to the polls on 7 February and the counting will take place on 10 February.