India’s improved ranking is due to its progress in dealing with underweight children, the report said. Between 2005 and 2014, the prevalence of underweight children under the age of five fell from 43.5% to 30.7%. This helped improve the severity of the hunger situation in India from alarming to serious.

The country’s latest child undernourishment number (30.7%) is a provisional estimate based on a survey by the ministry of women and child development with support from Unicef in 2013-14. The survey results are yet to be published by the government.

However, India remains home to the largest number of chronically malnourished and stunted children under five, the report said.

India ranked 63 last year and 65 in 2012 on the hunger index. The gauge has been released since 2006 by the International Food Policy Research Institute (IFPRI), a global think-tank on food security, together with non-profits Welthungerhilfe and Concern Worldwide.

In the first index in 2006, India ranked 96 among 119 countries—lower than the hunger hotspot of Sudan which was ranked 95 (Sudan, including the newly independent South Sudan, ranks 72 in GHI 2014).

Globally, between 1990 and 2014, the GHI score improved from 20.6 to 12.5—a reduction of 39%. But, despite the progress, the number of hungry people in the world remains unacceptably high at 805 million, the report said, adding that a critical aspect, hidden hunger or micro-nutrient deficiency, is often overlooked.

“Hidden hunger affects more than an estimated 2 billion people globally. The repercussions of these vitamin and mineral deficiencies can be both serious and long lasting," it said.

GHI is calculated by a simple average of three indicators: proportion of undernourished people as a percentage of the population, prevalence of underweight children under five, and mortality rate among under-five children. A lower GHI score implies better nutritional standard and a higher rank for a country.

In the latest report, GHI scores were calculated for 120 low-income countries. Of these, 76 were ranked. The severity of hunger was found to be low (GHI score less than 5) in 44 countries. These include Algeria, Argentina, Brazil, Cuba, Iran, Kazakhstan, Mexico and Turkey.

India was able to improve its GHI score as the government rolled out and expanded several programmes after 2006 that targeted a mix of direct and indirect causes of malnutrition, the report said. The main reasons were “a final push to expand the Integrated Child Development Services (ICDS) programme that aims to improve the health, nutrition and development of children in India and establish 1.4 million centres, and the launch of the National Rural Health Mission (NRHM), a community based outreach and facility-based health initiative to deliver essential health services to rural India."

The rural jobs programme and reforms in the public distribution system (PDS) are other likely indirect factors that helped improve India’s hunger record, the report noted. “Another key element was the creation of a body called the commissioners to the Supreme Court on the Right to Food case, a group that supports independent monitoring of the delivery of food based programmes like the ICDS and PDS," it added.

Citing numbers from the Food and Agriculture Organization (FAO) of the United Nations, the report said the effects of micro-nutrient deficiency—which afflicts more than 2 billion individuals, or one in three people—can be devastating, leading to mental impairment, poor health, low productivity and even death.

“The nature of the malnutrition burden facing the world is increasingly complex. Developing countries are moving from traditional diets based on minimally processed foods to highly processed, energy-dense, micronutrient-poor foods and drinks, which lead to obesity and diet-related chronic diseases. With this nutrition transition, many developing countries face a phenomenon known as the ‘triple burden’ of malnutrition—undernourishment, micronutrient deficiencies, and obesity," it added.

The numbers flagged in the report present a worrying picture: micro-nutrient deficiencies cause an estimated 1.1 million of the 3.1 million child deaths every year due to undernutrition. Nearly 18 million babies are born with brain damage due to iodine deficiency, while severe anaemia contributes to the death of 50,000 women during child birth every year. An estimated 190 million preschool children and 19 million pregnant women are affected by vitamin A deficiency.

In India, over 40% of preschool children are anaemic (iron deficiency is a leading cause), the report notes.

Although the GHI report does not provide country-wise disaggregated numbers on the prevalence of hidden hunger, numbers provided by FAO show the situation in India. 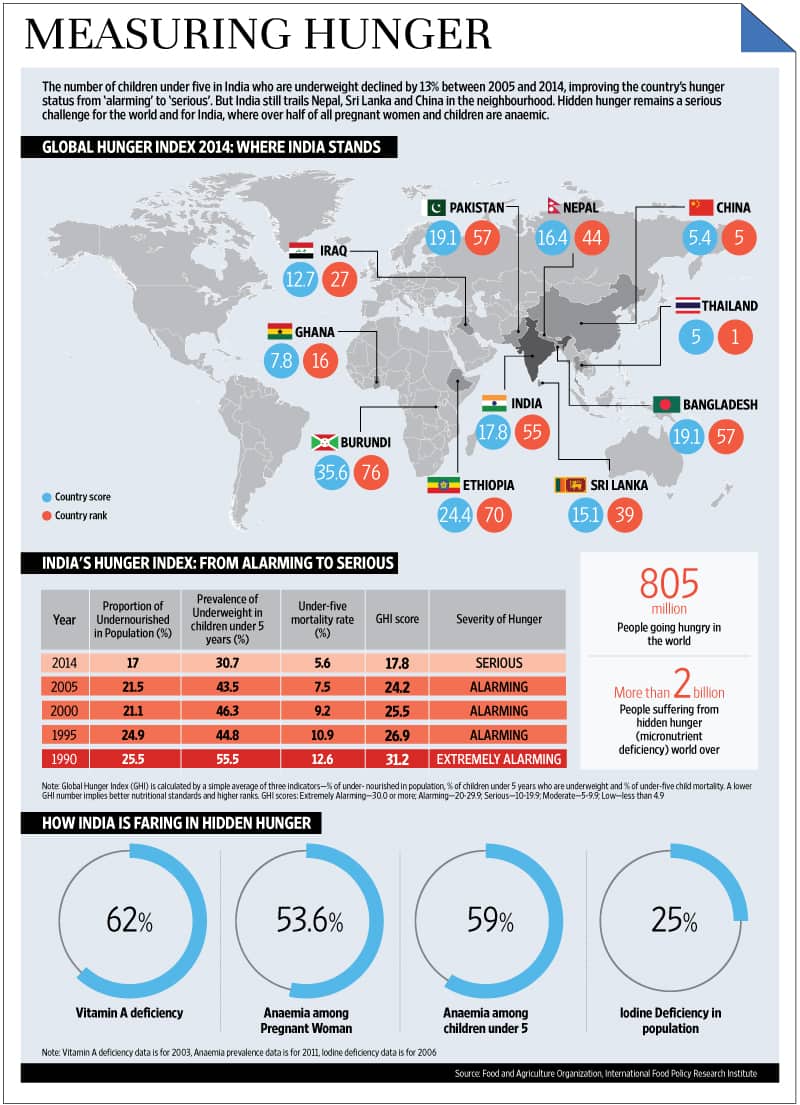 The way out of hidden hunger, the report said, is by diversifying diets, fortifying commercial foods (successfully done in iodized salt) and bio-fortification—using conventional or transgenic methods to increase micro-nutrient content in food crops.

The report added a cautionary note that an overemphasis on high-yielding staple crops during the Green Revolution (from mid 1970s to mid 1990s) “may have both improved and worsened nutrition".