The Communist Party of Nepal (Maoist), or CPN (Maoist), which won the most seats in parliament in the 10 April general elections, reached an accord with party leaders to head the coalition after “breakthrough" talks in Kathmandu, Nepalnews.com cited Jhala Nath Khanal, general secretary of the CPN-Unified Marxist Leninist party, or CPN-UML, as saying late on Monday. 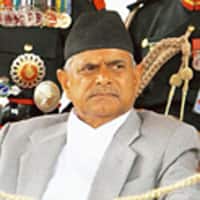 Leaders agreed the coalition will remain in force at least until the national assembly approves a new constitution, a process that may take two years to complete.

Parliament declared the Himalayan nation of 26.4 million people a republic at its first session on 28 May, ending 240 years of rule by the monarchy.

The new government will have to deal with food shortages and high fuel prices in the country. Nepal is one of the world’s poorest countries, with per capita gross domestic product of about $1,100 (Rs46,750) and one-third of its citizens living below the poverty line, according to US government data.

As many as 2.5 million people need food aid because of drought and rising prices, the United Nations World Food Programme said in June.

The Maoists will be joined in the coalition by the Nepali Congress, the CPN-UML and the Madhesi Janadhikar Forum that represents the people of the Terai region bordering India.

Nepal’s interim government earlier this year agreed to give Madhesis greater representation in state and local authorities in order to end 16 days of strikes and protests that paralysed Terai and led to fuel and food shortages in Kathmandu.

The region, Nepal’s agricultural heartland, accounts for 485 of the nation’s population and 80% of its commercial and industrial activities, according to Madhesi parties. It is the main transport link to India, Nepal’s biggest trading partner.

Lawmakers chose Ram Baran Yadav, an ethnic Madhesi, as the country’s first President on 24 July, rejecting the candidate put forward by the Maoists. The vote prompted the former rebel party to withdraw from power-sharing talks. A new round of talks began when Yadav asked the Maoists to try to form a coalition government.

The CPN (Maoist) party holds 220 seats in the 601-member assembly, double the number of its nearest rival, the Nepali Congress. The former rebels fought a decade-long insurgency to install a communist republic in Nepal before signing a peace accord in 2006. The new government will have to oversee the integration of former rebels into Nepal’s army.