Home / Politics / What happens after the present Dalai Lama dies?
Back
Share Via

What happens after the present Dalai Lama dies?

What happens after the present Dalai Lama dies?

Dharmsala: The question looms over this raggedy hillside town, a place where ancient mysticism constantly brushes against the realities of modern geopolitics. The monks who fled across the Himalayas ask it quietly, as do the exile politicians. Even the angry young activists are careful how they raise the issue.

But as the man at the centre of the Tibetan exile movement approaches his 75th birthday, the question has become impossible to escape: What happens after the Dalai Lama dies?

The issue echoes far from Dharamsala, the Dalai Lama’s home since he fled Tibet after a failed 1959 uprising against Chinese rule. It ranges from policy decisions in Beijing to widespread fears inside Tibet and among the 150,000 exiles that their struggle for autonomy may collapse with the death of their icon.

“When I pass away, when I die, of course, (there will be) a setback. Very serious setback," the Dalai Lama said quietly in a recent interview in his private hilltop compound. “But then, this younger generation will carry this on. There is no question."

That younger generation, though, isn’t so sure.

“Right now we are under His Holiness’ leadership," said Tenzin Norlha, a 29-year-old Tibetan genetics researcher in Dharamsala, her face creased with worry. While the Dalai Lama is thought to be in reasonable health, he has struggled with a series of ailments in recent years and turns 75 in July. “After he passes away, then what will we see? ... Who can take care of us as His Holiness has done?" 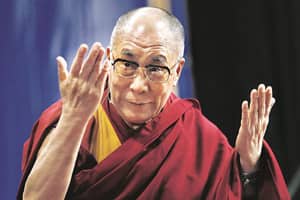 Personality cult: The Dalai Lama, the pivotal spiritual and political leader of the Tibetans in exile, turns 75 in July. Charlie Neibergall/AP

For nearly 500 years, the tradition has continued, with each dead Dalai Lama reincarnated into the body of a young Tibetan boy. But with Tibet’s leadership in exile and an aging Dalai Lama, Tibetan history is at a precipice.

“Once the Dalai Lama dies, the whole exile structure is going to be under enormous pressure," said Robbie Barnett, a Tibet scholar at Columbia University.

Among the possible aftershocks: a rival Dalai Lama anointed inside China, home to some 5.4 million Tibetans; squabbling among various Buddhist sects; a plunge in donations; infighting in the exile government and a drop in interest among wealthy foreign supporters and young activists.

“The Tibetan government is now standing on the strength of one man," said Jamyang Norbu, a writer who once fought for the small, long-disbanded Tibetan guerrilla army. He is one of the most outspoken intellectuals favouring complete Tibetan independence, as opposed to the limited autonomy the Dalai Lama now demands.

Norbu worries about the personality cult that surrounds the Dalai Lama, and the way his God-like status can make it difficult for dissenting voices to be heard. “In many ways, I am loyal to him. But it’s difficult to have an independent point of view" in the exile community, he said from his Tennessee home.

The Dalai Lama, the 14th in the line of reincarnations, has at times insisted his reincarnation would be born in exile and has also said the tradition could end with his death. He has talked about dividing his power, with his reincarnation carrying on spiritual duties while someone else—perhaps someone he appoints—takes up the leadership of the exile movement. He regularly meets high-ranking monks to discuss his succession. The group includes the Karmapa, a 24-year-old monk known for his daring escape from China and appreciation of PlayStation war games. Many observers believe he is being groomed to take on more power.

China has left little doubt that it intends to be deeply involved in the Dalai Lama’s succession, ridiculing his scenarios and insisting that religious law requires the reincarnation be born in a Tibetan area under Chinese control.

This means a government led by fierce atheists may soon be trying to steer an ancient mystical process, using monks loyal to Beijing to install a China-approved successor.

Such a move would echo Beijing’s tactics with the Panchen Lama, one of the leading figures in Tibetan Buddhism. In 1995, when the Dalai Lama named a young boy as the reincarnated Panchen Lama, that boy disappeared and has not been seen since. Another boy, backed by Beijing, was soon named the official reincarnation, though he has little support among Tibetans.

The Dalai Lama, despite his occasional lapses into pessimism, is hopeful that things will improve in Tibet. The activists are hopeful.

Even the state oracle is hopeful. The oracle is an avuncular 52-year-old monk named Thupten Ngodup who, during trances, is said to be able to communicate with the spirit world and look into the future. He is a powerful political and spiritual adviser to the government and the Dalai Lama.

Ngodup, who fled Tibet as a child, has no doubt that he’ll return. “Perhaps my hope might sound a little stupid," he said in his monastery office. “But in this century, the era of dictatorship is passing."