New Delhi: Drought-hit farmers, whose crop loans are rescheduled into term loans due to their inability to pay, may be charged lower interest rate at 7% from 12% as part of relief measures being considered by the government.

The agriculture ministry has moved this proposal for consideration before the Empowered Group of Ministers (EGoM) on drought, headed by agriculture minister Sharad Pawar, sources said. The EGoM meeting is likely to take place soon. 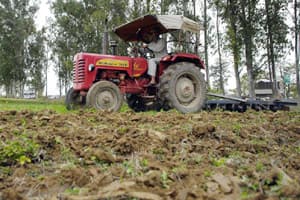 Presently, crop loans are given at the interest rate of 7%. During agrarian crisis like drought, the recovery is automatically rescheduled, that is, crop loan is converted into a term loan and farmers get three years time to repay.

However, the rescheduling of crop loans is not benefiting farmers to a greater extent as interest rate for term loan is higher at 12%.

Hence, the Agriculture Ministry has proposed bringing the interest rate on term loan at par with the crop loan at 7%, the source noted.

Due to deficit rains, four-states - Karnataka, Gujarat, Maharashtra and Rajasthan have declared drought in more than 390 taluks. Monsoon is deficient in the country by 12% so far.

To ensure income to farm labour in drought-affected areas, the EGoM may also consider providing more number of guaranteed work under the MNREGA from 100 to 150 days considering the current year as special case, the source said.

Under Mahatama Gandhi National Rural Employment Guarantee (MNREGA) scheme, the government assures 100 days of work every year to each household in rural areas.

Generally, people avail of the benefit under the scheme during the off-season for agriculture. The government has provided ₹ 33,000 crore to implement the scheme this fiscal, as against ₹ 31,000 crore in 2011-12.

The EGoM on drought would also discuss other proposals such as a special package for protective irrigation to save orchard crops, the source added.

In the last EGoM, the government had announced mitigation measures such as diesel subsidy, enhanced ceiling on subsidies on seeds and channelised funds under various schemes to boost drinking water and fodder supply for livestock.

The four states have sought relief funds to mitigate the impact of drought and central teams have been constituted to visit these states to assess the situation.

Poor monsoon has affected sowing of kharif (summer) crops with total area lagging behind at 95.43 million hectare so far from 101.5 million hectare in the year-ago period.