Bangalore: An activist group has filed a case against a government agency’s decision to lease out 12 lakes here to real estate developers and hoteliers, bringing to the forefront issues related to the ownership and maintenance of public spaces across the country.

The case, a public interest litigation (PIL), has been filed in the Karnataka high court by the Environment Support Group, or ESG, against the Lake Development Authority ( LDA), which was set up in 2002 to maintain Bangalore’s lakes. 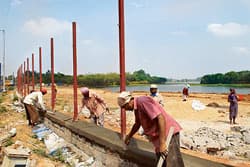 Construction work on the banks of Hebbal Lake for an upcoming floating restaurant (Photo by: Hemant Mishra / Mint)

Leo Saldanha, ESG’s founder, filed the petition after LDA said it would lease out 12 more lakes. “Lakes and tanks are public spaces. They are the property of the state government; therefore the power to lease is also available only to the state government."

His argument is that LDA was set up to maintain the lakes, not lease them out.

ESG’s petition urged the court to cancel the leases, saying the companies they have been leased out to are profit- making entities that intend to turn the lakes into recreational zones, where people will be charged for entry.

According to a report of the expert committee for preservation and restoration of tanks and lakes in Bangalore metropolitan area, the number of lakes in the city has fallen to 81 now from 262 in 1960.

“In a city like Bangalore, where do you go for a walk? There are no beaches here, only the lakes are available. Now even that option has been taken away. LDA’s job was to preserve lakes, not sell them… this is a height of exploitation," says Jerome Jaykar, former commissioner of Bangalore Development Authority (BDA).

Jaykar says the city, with its burgeoning population, needs its natural resources.

Interestingly, both Hebbal and Nagawara lakes were restored a few years ago, with weeds and silt removed at a cost of almost Rs8 crore funded out of public money.

ESG’s Saldanha says whenever a lake has been rehabilitated in the city, it has been passed off to a corporate under the guise of rehabilitation, restoration and maintenance. He says multinational companies, which have offices near the tanks, want to take over a part of the zone, often under the guise of taking care of it.

The LDA, on the other hand, says unnecessary hue and cry is being created regarding the move. “We are not privatizing the lakes. We are giving out lakes and tanks on operation and management lease only," says LDA chief executive C.S. Vedant.

Vedant says LDA is leasing out the lakes because the government does not have the infrastructure, manpower or the money to take care of them. He refused to answer any further questions.

Gopalkrishna Raju, director at Lumbini Gardens that has leased the Nagawara Lake, says, “Before we initiated our project on the Nagawara Lake, the place was a dump. Now, this place is brimming with families." Lumbini charges an entry fee of Rs20 on week days and Rs30 on weekends.

Environmentalists say the privatization of lakes will adversely effect their biodiversity. Experts also say that with 90% of Bangalore’s lakes already threatened with extinction, it will be difficult for the “city of lakes" to preserve its identity for much longer if entrepreneurs continue acquiring them.