Shipbuilders set to get subsidy of Rs5,000 cr

Shipbuilders set to get subsidy of Rs5,000 cr

Bangalore: The shipping and finance ministries are set to resolve a 17-month-old dispute over subsidizing shipbuilders on confirmed orders that were considered ineligible for a five-year scheme which ended on 14 August 2007.

“We are moving towards a resolution now," a shipping ministry official said on condition of anonymity. “The shipping ministry had requested the finance ministry to sanction about Rs5,000 crore to pay subsidy pending on the earlier scheme and the finance ministry has agreed." The scheme offered shipbuilders 30% extra on building ocean-going merchant vessels at least 80m in length, provided they were for the domestic market. For export orders, ships of all types and capacities were eligible for the subsidy. 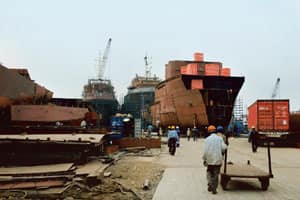 Shipbuilders claimed that they could not apply because they were unable to get the so-called price reasonableness certificate from India’s maritime regulator Directorate General of Shipping (DGS) before the scheme ended.

Local shipbuilders had asked for price reasonableness certificate from DGS on as many as 70-75 ships a few days before the scheme closed. “We had difficulty in getting the price reasonableness certificate from the DGS because the regulator could not handle such a large number of applications within a short time," an executive with a Mumbai-based private shipbuilding firm said on condition of anonymity. “Hence, we could not notify the ministry on such orders."

Shipbuilders have also been lobbying for an extension of the five-year subsidy scheme, which had started in the mid-1990s and had been extended twice already.

In the last few days before the scheme closed, shipbuilders, most of them private firms such as ABG Shipyard Ltd, Bharati Shipyard Ltd, Pipavav Shipyard Ltd and Larsen and Toubro Ltd, signed orders worth a few thousand crores through negotiations with global fleet owners.

According to the scheme, in the case of export orders, where the price of a ship is finalized on the basis of negotiations between two parties, the reasonableness of price would have to be determined by DGS. Subsidy would be admissible on the contracted price or the price as certified to be reasonable, whichever was less. The subsidy is given to public sector yards in instalments, while private companies get it only after the ship is delivered.

However, following lobbying by the local shipbuilding industry seeking subsidy on orders signed before the scheme expired, the shipping ministry relented in January.

The shipping ministry is expected to soon approach the Union cabinet with two proposals. One will seek its approval for pending subsidy of Rs5,000 crore on the earlier scheme. The other will ask for the scheme to be extended. “The new scheme will be quite different from the old one," the official said. The amount and tenure of the new scheme have not been decided.