By 2031,some Indian states will face similar ageing-related issues that European countries are facing today.

Mumbai/New Delhi: The International Day of Older Persons is observed globally on 1 October. For India, it might be an opportune moment to reflect on our own ageing population and how a double-track ageing process underway in the country might shape our society, our polity, and our economy.

A Mint analysis of data from the last decennial census and the latest sample registration system (SRS) shows that most of India’s prosperous states will age much faster than the rest.

By 2031, almost half of Tamil Nadu and Kerala will be above 40 years of age even as Uttar Pradesh and Bihar remain relatively young. This means the north-south divide in the country will also manifest itself as a young-old divide in the coming years.

Although some parts of the North and the East will also undergo ageing at a similar pace as Tamil Nadu and Kerala, for most states in northern India, the ageing process is likely to be slower. While states in the South will have a similar share of the aged as countries in Europe by 2031, those in the north will continue to resemble Asian or African nations in terms of the share of aged people. 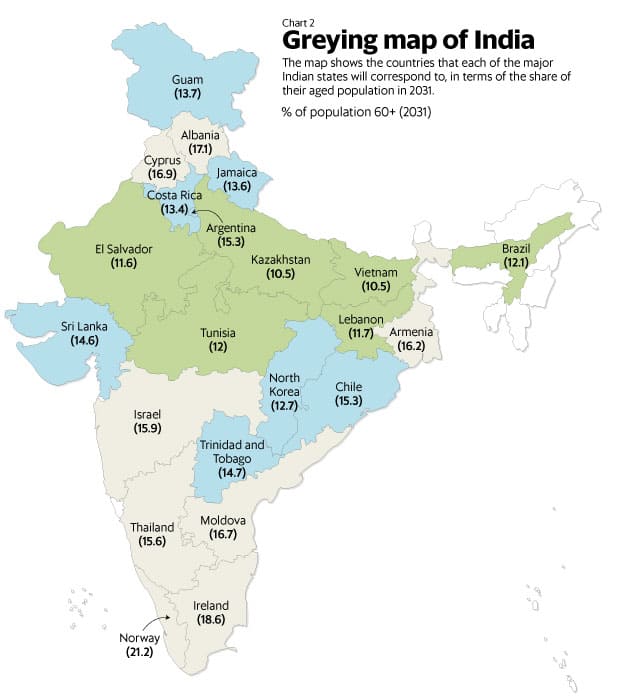 Southern states here refer to Karnataka, Kerala, Tamil Nadu, Telangana and Andhra Pradesh. On the other hand, the 60+ population will make up only 11.4% of the ‘Hindi belt’ population in 2031, rising modestly from 7.7% in 2011. ‘Hindi belt’ here refers to Uttar Pradesh, Uttarakhand, Rajasthan, Madhya Pradesh, Chhattisgarh, Haryana, Himachal Pradesh, Delhi, Bihar and Jharkhand.

The impact of migration has been ignored to calculate state-wise figures since the aim of the analysis is to arrive at the pre-migration demographic break-up across states.

The analysis suggests that the double-track demographic transition will raise new challenges for our polity and economy. As the working age population in the prosperous states decline, they may require migrants from other parts of the country.

However, new migrants bring with them new challenges of assimilation and accommodation and also open up new cleavages for politics and politicking.

Already, there are rumblings of discontent in southern states against migrants from the ‘Hindi belt’ though such migrants account for a small, albeit growing, share of the population of the southern states.

The disconnect over policies and resource-sharing might also grow as an older and more prosperous South might have different demands on the Indian Union compared with a younger and more numerous populace in the North. For example, older people are likely to prefer low inflation over economic growth as inflation reduces the real value of their accumulated savings. On the other hand, younger people might be more amenable to tolerate high inflation if they are compensated by income growth.

The key question to ask is whether our polity will have the maturity to handle these contradictions sensibly over the next couple of decades as the double-track demographic transition in India intensifies.