On 20 July, it will be 40 years since three astronauts—Neil Armstrong, Edwin ‘Buzz’ Aldrin and Michael Collins—created history by landing on the moon, leaving a trail of man’s technical prowess both in outer space and on earth. The celebrations this year are loud as once again countries, including India, are challenging each other and readying for modern-day moonwalks, even thinking of a longer stay this time. The whirligig tour of the world the three moonwalkers did in 1969, covering 25 countries in 35 days, was as much to showcase the National Aeronautics and Space Administration’s, or Nasa’s, capabilities as to inspire and unite the world in its space endeavours. The Tata Institute of Fundamental Research, or TIFR, was on its itinerary as one of the few organizations involved in the analysis of moon rock samples brought by Armstrong and his team. The trio landed in Mumbai on 26 October to a warm public reception at Azad Maidan. It was followed by a technical discussion of sorts at TIFR. Mint spoke to scientist M.G.K. Menon who was then director of TIFR. Menon, along with Vikram Sarabhai, the pioneer of India’s space programme which was just seven years old then, and Homi Sethna, director of Bhabha Atomic Research Centre, had welcomed the three astronauts. Edited excerpts: 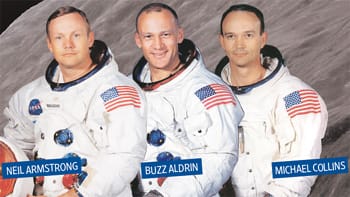 The crescent: ‘Earthrise’ was first photographed by the Apollo 8 crew. This photo was shot by the crew of Apollo 17. Photograph courtesy : Nasa

What was it like to receive the astronauts? What are your impressions, even if fading, of them?

I remember we waited for a long time for them to arrive at TIFR, it was almost late evening. All three were very relaxed and spoke about the landing with a great sense of accomplishment. But I found Collins to be the most stable and frank speaker; I was quite impressed with him. He was the one who went around the moon while his two colleagues landed on the surface, but he showed no sense of envy or jealousy at this. He freely spoke about the soil, rocks and all other technical details of the landing. In contrast, Armstrong was more reserved.

Are you aware that Armstrong became reclusive; leaving Nasa and shunning recognition to such an extent that he gave probably just two television interviews in 40 years? Did he come across as being reticent when you met him?

No, I am not aware of this, but I can believe you. It’s been long 40 years...though I know Aldrin did have some psychiatric problems. Armstrong came across as someone who did the job, I wouldn’t say he was very excited about it, but showed it as an accomplishment for Nasa, the US and mankind in general (in that order).

You know his famous statement—(One small step for (a) man;) one giant leap for mankind—it was essentially about that.

Looking back, did you at the time think India would ever aspire to send satellites, manned or unmanned, to the moon?

Personally, at that point of time, I didn’t think we’d be doing this but, at the same time, I knew that given the chance, opportunity and everything else, Indian science would be able to accomplish similar things. I’m not saying this as bravado, but there was a quiet sense of confidence in the capabilities of Indian science. Soon after that, Vikram Sarabhai died in December 1971 and I was asked to take over as the chairman of Isro (the Indian Space Research Organisation) in January 1972. For some time, many thought India’s space programme will not take off, but we went from strength to strength, building satellites and launchers.

Armstrong and his team gave an autographed photo to TIFR which is now missing. How did that happen?

See, I’d have received it as director and handed it over to the institutional authorities. Now, people say it is missing. But I have a feeling it is not stolen, it is misplaced and they’ll find it.