Donald Trump's campaign has been playing down his preparations for the event at Hofstra University, saying he isn't interested in studying binders of policy points or holding mock debates

Washington: Donald Trump’s rise in the polls has come after weeks in which the candidate has learned to stay out of his own way on the campaign trail. But Monday’s debate could prove the ultimate test of whether his new-found discipline can hold when he needs it most.

Trump’s campaign has been playing down his preparations for the event at Hofstra University, saying he isn’t interested in studying binders of policy points or holding mock debates. His chief handlers—Steve Bannon, Kellyanne Conway and David Bossie—have been focused for weeks on trying to control his penchant for drifting off message.

To prepare for the debate, they’ve booked events for him over the past few weeks in which he appeared before audiences that were anything but his adoring fan base. The results have been mixed.

Earlier this month, he employed a subdued tone when addressing a black congregation at Detroit’s Great Faith Ministries, and received a warm welcome by parishioners. Almost two weeks later, however, the reception was markedly different when Trump used an appearance at Flint, Michigan’s, Bethel United Methodist Church to go after Democrat Hillary Clinton, only to be cut off by pastor Faith Green Timmons.

The Trump campaign sees those forays as not just helpful in preparing the candidate for Monday’s debate, but as an overall sign of strength.

“I really applaud Donald Trump for having this conversation in and about the inner cities," Conway said Sunday on ABC’s This Week. “He went to a black church in Detroit several weeks ago, taking his case directly to the people. You don’t see many Republican candidates do that, particularly when they’re running for president."

By and large, since Bannon, Conway and Bossie have taken the reins of the campaign, Trump has stuck to prepared remarks on a teleprompter screen and steered clear of generating negative headlines with his own off-the-cuff remarks. But on Saturday, Trump caused a stir when he tweeted a taunt at Clinton suggesting “perhaps I will put Gennifer Flowers" in the front row at the debate, referring to a woman Clinton’s husband had an affair with decades ago.

Conway, who has been working to help Trump overcome his problem with female voters, on Sunday walked back Trump’s assertion.

“We have not invited her formally and we don’t expect her to be there as a guest of the Trump campaign," Conway said on CNN’s State of the Union, adding that Team Clinton was wrong when they said Trump’s Flowers tweet shows he’s “easily provoked." 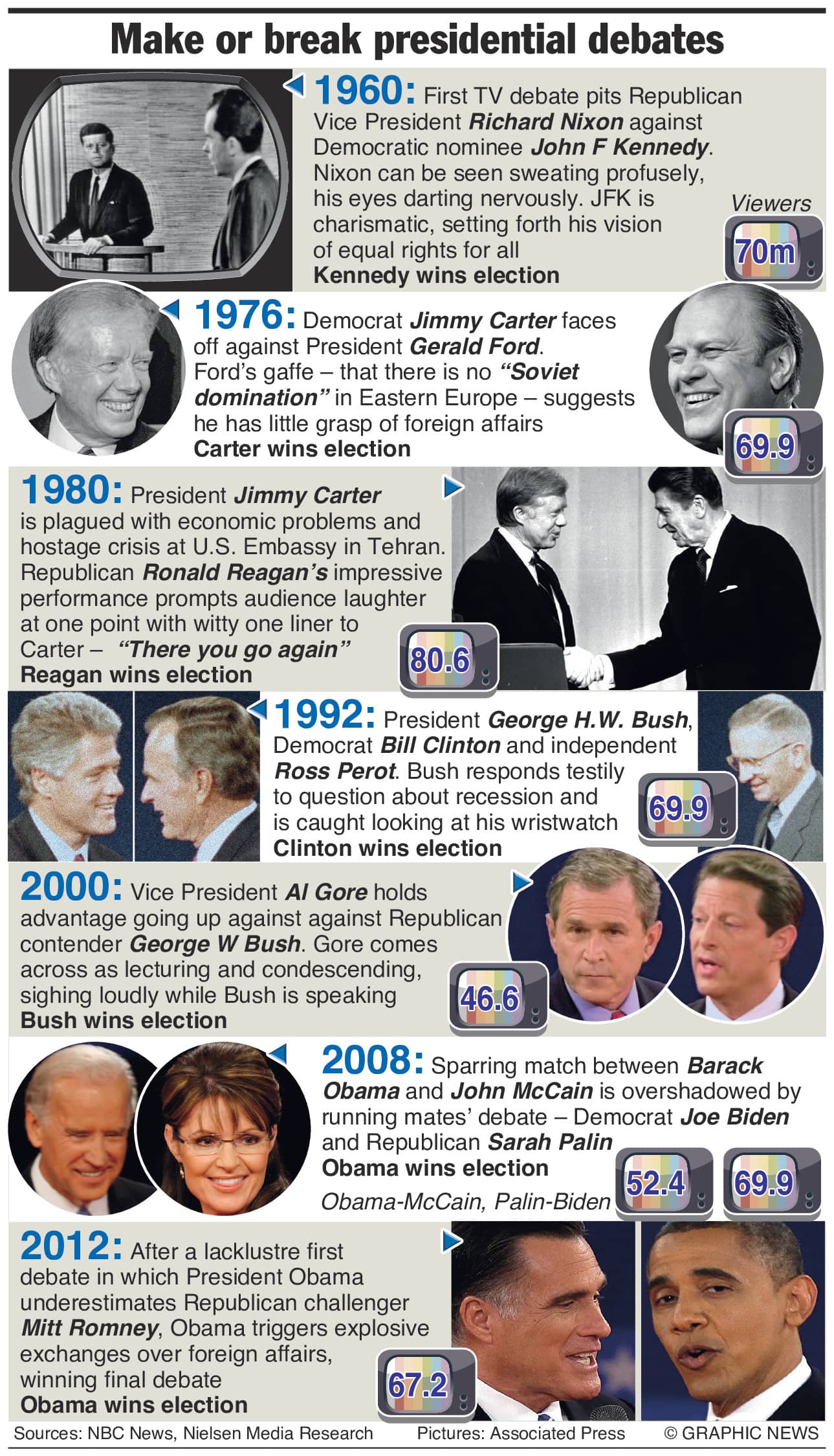 Whether Trump allows himself to be provoked over the course of 90-minute debate could tell the story of which candidate is perceived to come away the victor. The event will be watched by tens of millions of Americans, but will involve just three people: Trump, Clinton and moderator Lester Holt, of NBC News.

Trump is learning not to let criticism or annoyances rattle him—a weakness Clinton is likely to try to exploit, analysts said.

“The key question is whether Clinton’s needling will get to him and whether he’ll revert back to early primary Trump and start up again with the nicknames and insults," said Aaron Kall, director of debate at the University of Michigan and co-author of Debating The Donald. “There are major concerns about his temperament to be president and that’s not the image he wants to project on stage while in front of undecided and skeptical voters that will soon be making their final decisions."

Trump must also display more command of policy details than he has in the past, both in terms of his own plans and his critiques of his opponent’s. Despite his preference for improvisation, Trump put in some dedicated debate prep this weekend under the tutelage of former New York mayor Rudy Giuliani, retired Army Gen. Keith Kellogg, GOP chairman Reince Priebus, New Jersey governor Chris Christie, and retired Army Lt. Gen. Michael Flynn. Also key were Bannon, his campaign CEO; Conway, his campaign manager; Bannon, his deputy manager; Jason Miller, his communications chief; and Stephen Miller, his policy chief.

Under their guidance, Trump has continued to refine his “America first" stances and promote proposals such as deporting undocumented immigrants, racially profiling Muslims to prevent terrorist attacks, the use of “stop-and-frisk" policing to reduce crime in the inner cities. At the same time, he’s embarked on a minority outreach push in battleground states while limiting his media appearances to Fox News and local television interviews.

Sensing that the momentum of the race has turned in their favour, Team Trump is feeling confident going into the first debate, Trump’s advisers told Bloomberg Politics, and believe that Clinton’s narrow national lead is within reach.

Also Read: US presidential debate expected to be rare draw in polarized age

The Real Clear Politics average of national polls puts Clinton ahead of Trump by just 2.2%, and some in the real estate developer’s inner circle believe if the election were held today, he’d rake in enough electoral college votes to win the White House. Advisers cite a series of reasons: polling showing Clinton’s disconnect with the working-class voters she and her husband have relied on to win elections over the years; he’s drawing thousands to his rallies while she attracts hundreds; and the army of Trump volunteers, which now numbers around 3 million, is a weapon they don’t think Team Clinton has fully taken into account.

“I haven’t seen this amount of enthusiasm for a Republican presidential candidate in my lifetime," said senior Trump adviser Sarah Huckabee Sanders, whose father, Mike Huckabee, ran for president twice.

When Trump installed Bannon, Conway and Bossie, they told him they believed a divorce from the Republican National Committee was imminent, according to a person with knowledge of the conversation. Just days beforehand, GOP leaders were reportedly considering cutting off the flow of cash to the presidential campaign in order to protect vulnerable Senate candidates, a move that strategist believed would lead to a 20-percentage point loss in the popular vote.

“It’ll be a catastrophic landslide," one said. “It’ll be the first couple of lines in your obituary in the New York Times."

While current swing state polling does show a Trump path to victory, it’s tougher than his advisers suggest.

“Winning in every state where you have a slim lead and holding back larger demographic and political shifts happening in swing states such as Nevada and North Carolina is a much different path than he travelled to the Republican nomination," said Kyle Dell, a political science professor and vice president of Guilford College in North Carolina and vice-president of Vote Smart, a non-profit and non-partisan elections research organization.

Trump’s strategists bought small segments of airtime on national cable TV, including time on Sunday political shows Meet the Press on NBC and Fox News Sunday over the weekend.

Instead of purchasing airtime on local affiliate stations targeted at swing state voters Trump needs to reel in, the ad buy seemed targeted at certain elites—some party establishment types, big donors and some in the mainstream media—who think he’s still not running a real campaign.

David Kochel, a GOP strategist who is unaffiliated with the campaign and is a vocal Trump critic, said he recognizes the tactic from his first campaign in 1984, when campaign strategists would buy a billboard close to the candidate’s house so he’d feel good every morning. That’s what Trump’s advisers are doing, Kochel said.

“If I had to guess, they’re buying this not for elites but for one elite. Donald J. Trump. He’s the candidate who loves seeing his name," Kochel said.

Over the past few weeks, Trump has showcased that he’s able to control his tongue. During a campaign stop on Thursday at Geno’s Steaks in Philadelphia, a smiling Trump walked toward a group of reporters and seemed ready to answer questions.

When he was asked about his years-long attack on President Barack Obama’s status as an American-born citizen, his smile disappeared. He headed toward the cashier to order a cheese steak sandwich. Then he turned back around to address the reporters. “Jobs," he said. “We needs jobs, everybody. We need a lot of things in this country."

The bombastic Trump who relished hosting question-and-answer sessions with the media has been more muted lately. At a 16 September event at the new Trump hotel in Washington DC initially billed by the campaign as a press conference, he instead kept the media corralled at the back of the room and avoided the questions they shouted over the heads of his invited guests.

For the next five days, during what could be described as a political game of cat-and-mouse, Trump dodged questions from reporters who got near him at events where he interacted with voters. It was all to ride out a news cycle dominated by criticism of his “birtherism" stance. And, sure enough, the issue was soon dwarfed by the 17 September terrorist bombing in Manhattan and rioting in Charlotte, North Carolina, sparked by Tuesday’s police shooting of a black man.

While honing the skill of holding his tongue has certainly helped his poll numbers, Trump won’t have the luxury of focusing on a teleprompter or avoiding unfamiliar topics at the debate. Still, his advisers aren’t openly worrying about his prospects.

“He’s a brilliant debater," Conway said Sunday on ABC’s This Week. “Newt Gingrich put it best. The former speaker recently said Donald Trump is the best debater he’s ever seen. He’s like the Babe Ruth of debating. He really shows up and swings and does a great job." Bloomberg