New Delhi: A widespread drought and rising indebtedness led to 12,602 suicides by farmers and agricultural labourers in 2015, shows data released by the National Crime Records Bureau.

According to the report ‘Accidental deaths and suicides in India 2015’, the total number of suicides in the farming sector is 2% higher than the 12,360 recorded in 2014.

Both 2014 and 2015 were drought years, triggering farm distress across several states, and the data shows that just seven states accounted for 87.5% of the suicides in the farming sector in 2015. 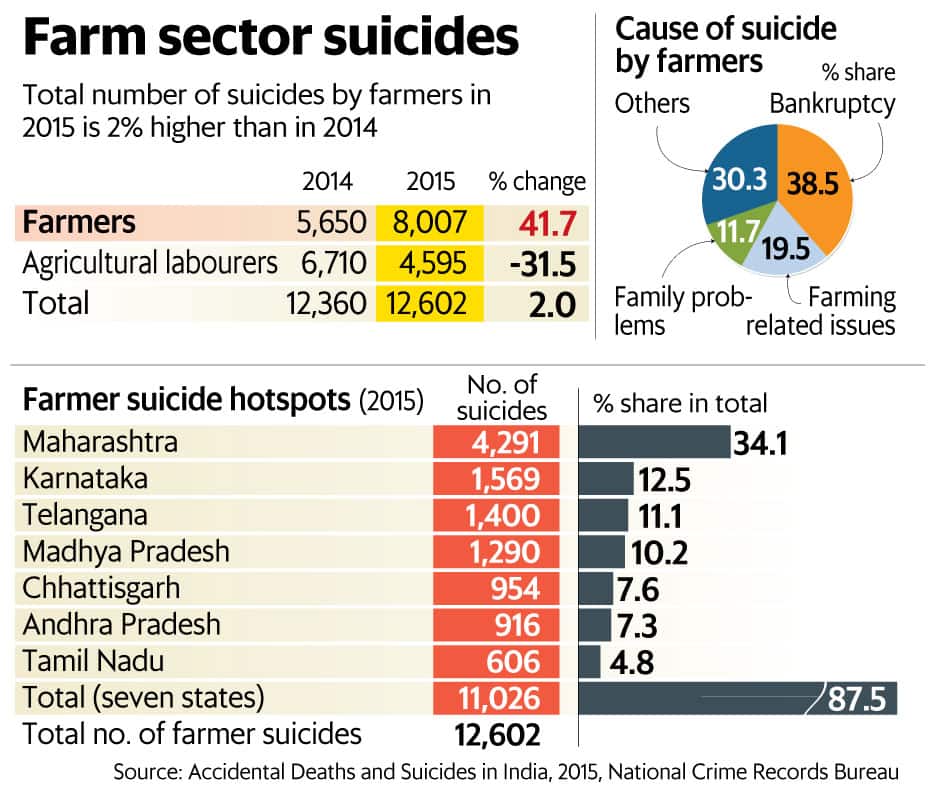 The report defines farmers as those who farm their own or leased land. Agricultural labourers are those whose primary source of income comes from working as farm hands.

The spike in the number of farmers’ suicides in 2015 is despite the likes of West Bengal, Bihar, Jharkhand, Uttarakhand and Himachal Pradesh reporting zero suicides.

The report shows that bankruptcy, indebtedness and farming-related issues were the leading causes of suicide by farmers, accounting for over 58% (4,659 out of 8,007) deaths. Going by landholding status, the data shows that nearly 73% of farmers who committed suicide were small and marginal cultivators owning less than 2 hectares.

“The 42% spike in farmer suicides in just one year signals the severe distress in the agriculture sector and shows that while wage labourers had the choice to move out to non-farm sectors, the farmer is stuck with rising debt and falling incomes," said Himanshu, associate professor at Jawaharlal Nehru University, Delhi, and a columnist with Mint.

“What is shocking is that the spike comes despite attempts by several states to underreport the suicide numbers since 2010. The government at the centre came in 2014 during a phase of declining commodity prices and they woke up very late to the crisis; even new schemes like crop insurance and electronic marketing of farm produce are yet to show results," Himanshu added.

Highly erratic and inadequate monsoon (in 2014 and 2015) aggravated “the problems for persons engaged in the farming sector," the report said, adding that “manifestations of these in extreme situations can be seen in the form of farmers’ suicides."

In 2015, 11 states had declared a drought. Following the normal monsoon in 2016, the agriculture ministry has projected a record foodgrain production during 2016-17. However, over the past month farm incomes have been severely dented due to falling prices of foodgrain like pulses and perishable produce.