Exporters are struggling with a liquidity crunch because of delayed GST refunds, leading to the highest trade deficit in 35 months

New Delhi: India’s merchandise exports declined for the first time in 14 months in October as exporters struggled with a liquidity crunch because of delayed refunds under the goods and services tax (GST) regime, leading to the highest trade deficit in 35 months.

Data released by the commerce ministry on Tuesday showed exports fell 1.1% in October to $23.1 billion while imports expanded at the slowest pace in 10 months at 7.6% to $37.1 billion. India’s trade deficit in the month was $14 billion. 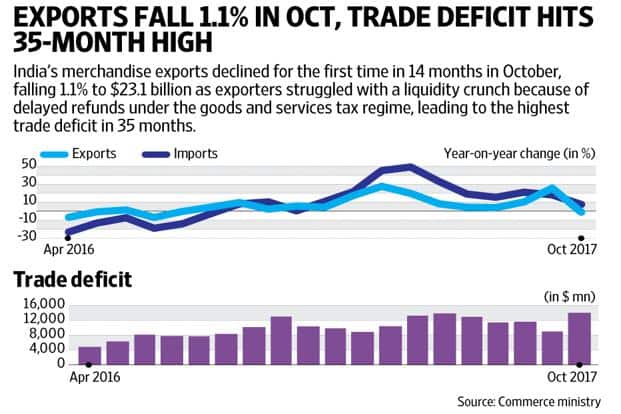 The decline had been expected because exporters, particularly micro, small and medium enterprises (MSMEs), were facing liquidity problem after paying GST for four months in a row without getting any refund, said Ganesh Kumar Gupta, president of the Federation of Indian Export Organisations (FIEO).

Gupta said exports should be kept out of the purview of GST as paying the tax first and getting a refund was cumbersome, complex and complicated, affecting exports.

“There is immediate need for remedial measures to prevent further decline in exports; otherwise the situation may be worse for November. Implementation of the measures approved by GST Council is not taking place; as a result challenges faced by the exporters remain the same," he added.

Exporters had complained that the imposition of integrated GST and delays in refund of input tax credits were hurting overseas shipments, prompting the GST Council to continue two pre-GST era schemes that allow duty-free sourcing of materials for export production until March 2018. The move is expected to improve the liquidity of exporters by preventing working capital from getting locked up in tax procedures.

The council also introduced a 0.1% GST rate for merchant exporters, offering relief from the full applicable GST rates on procurements. Merchant exporters do not manufacture products themselves, but procure from others for shipping overseas.

Growth in non-oil, non-gold merchandise imports eased sharply to 4.9% in October, after double-digit growth since March 2017, led by a substantial decline in imports of transport equipment (48%), precious stones (1.6%) and gold (16%).

The WTO’s latest World Trade Outlook Indicator (WTOI) also suggests that global merchandise trade growth will likely moderate in the December quarter of 2017. For 2017, WTO has projected trade expansion at 3.6% following stronger-than-expected trade growth in the first half of the year.

Although the merchandise trade deficit rose sharply in October, it may not be a source of alarm, as the average trade deficit for September-October is in line with the trend in the months of July and August, said Aditi Nayar, principal economist at Icra Ltd.

“The contraction in merchandise exports in October partly reflects an unfavourable base effect, as well as upfronting of shipments to the previous month," she added.

Nayar said Icra expects the current account deficit (CAD) to more than double to $7.5-$8.5 billion in the second quarter of 2017-18 from $3 billion during the same period a year ago.

“Nevertheless, the size of the CAD would soften appreciably on a sequential basis, from the $14 billion recorded in the first quarter of 2017-18," she added.