Railway tracks of a total length of around 1,938 km will be laid by the Indian Railways under the projects

New Delhi: In an effort to ramp up capacity and decongest key routes for rail traffic, both freight and passenger, the Union cabinet on Wednesday approved nine projects estimated to cost ₹ 24,374 crore.

This is consistent with the message delivered by railway minister Suresh Prabhu in the budget he presented for 2016-17, which identified expansion of capacity—particularly on saturated networks—as a key priority over the medium term. This is because lack of adequate infrastructure was creating a bottleneck and impeding economic growth.

Under the projects across the states of Assam, West Bengal, Jharkhand, Chhattisgarh, Maharashtra, Uttar Pradesh, Madhya Pradesh, Telangana, Andhra Pradesh and Odisha, railway tracks of a total length of 1,937.8km will be laid by the Indian Railways. The constructions of the lines is expected to facilitate easier passenger travel and movement of freight items such as steel, coal and cement. 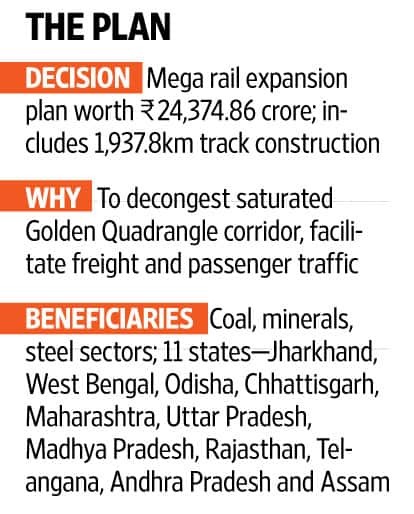 Speaking to reporters, railway board chairman A.K. Mital and railway board member (engineering) Arun Kumar Mittal said, “The move will be a big boost to capacity augmentation on the fully saturated golden quadrangle corridors, facilitating transportation of freight and passenger traffic in a big way. It will benefit 11 states across the country and a fillip to the coal, minerals and steel sector," said Mital.

The projects approved are the construction of tracks between Itarsi and Nagpur, Ballarshah and Kazipet, Jhansi and Bina, Vijayawada Junction and Gudur Junction, Mathura and Jhansi, Jharsuguda and Bilaspur, Rajnandgaon and Nagpur (Kalumna), Kharagpur (Nimpura) and Adityapur in West Singhburn district of Jharkhand and New Bongaigaon and Kamakhya in Assam.

The third and fourth line projects approved on Wednesday are in north-south and east-west corridors of the golden quadrangle, which is fully saturated. These lines play a key role in transportation of freight and passengers from eastern and southern regions to northern and western regions and vice versa. At present, the number of passenger and goods trains in this section far exceeds capacity, resulting in long delays.

Jaijit Bhattacharya, partner, infrastructure and government services, at KPMG India, said, “It’s a significant move and it will take around 3-4 years to fortify this investment. If the procurement for these projects is made within India, it will contribute 0.4% to the GDP (gross domestic product) and will also have a multiplier effect."

He added that the move will also help to increase efficiency of the railways, reduce transportation costs and lead to a significant reduction in emission of greenhouse gases.

Separately, the Cabinet Committee on Economic Affairs (CCEA) also approved the development of 1,120km of national highways in the states of Karnataka, Odisha, Bihar, Rajasthan and West Bengal, at an estimated cost of ₹ 6,461 crore including cost of land acquisition, resettlement and rehabilitation along with other pre-construction activities.

The CCEA also approved waiver of penal interest on ₹ 897.23 crore of government of India loans availed by the Cochin Port Trust.

The cabinet on Wednesday approved a new air services agreement between India and Fiji. Now Indian carriers can operate to any point in Fiji while carriers in Fiji can operate direct flights to Delhi, Mumbai and Chennai and code-share flights with Indian carriers to Bengaluru, Kolkata and Hyderabad.

It also approved a memorandum of understanding (MoU) between India and South Africa to establish cooperation in grassroots innovation. The MoU will provide a mechanism to create an ecosystem that will promote inclusive innovation and entrepreneurship in both countries with particular focus on indigenous knowledge systems and agriculture biotechnology.

The leasing out of Airports Authority of India land measuring 4,050 sq. m to Assam Industrial Development Corporation, a government of Assam undertaking, also received approval. This will be utilized for setting up a Centre for Perishable Cargo. The land is to be leased by AAI for a token fee of ₹ 1 per annum for a period of seven years.

In addition, the cabinet approved a long-standing demand to include victims of cross-border terrorism and mines/improvised explosive devices for compensation from the central government. A sum of ₹ 5 lakh will be given to those who suffer 50% or more disability or incapacitation due to these reasons.

Previously, only victims of terrorism, communal violence and left-wing extremism were eligible for central assistance of an amount of ₹ 3 lakh.

Arunabh Saikia contributed to this story.