Fiscal deficit at 80.8% of full-year target at the end of Q1

New Delhi: The central government’s total expenditure rose in the quarter ended 30 June, leading to a sharp jump in fiscal and revenue deficit figures during the quarter.

The Union finance ministry had advanced the budget presentation by a month to 1 February this year, instead of the usual practice of presenting it on the last working day of February, in order to initiate revenue mobilization and capital expenditure measures right from the beginning of the fiscal year.

Data released by the Controller General of Accounts showed that during April-June, total expenditure rose to 30.3% of the full-year target of Rs21.5 trillion, against 25.9% during the same period in the previous fiscal year.

However, analysts said the sharp jump in fiscal and revenue deficit numbers are not a cause for alarm.

Aditi Nayar, principal economist at ratings agency Icra Ltd, said the advancing of the budget presentation and expenditure pattern means the data is incomparable with the previous year.

“In particular, the robust 40% year-on-year expansion in the government’s capital expenditure in Q1 FY2018 is encouraging," she said.

The government also released more than half (62%, or Rs92,933 crore) of the budget estimates for major subsidies in the first quarter, contributing to the high growth of revenue expenditure. 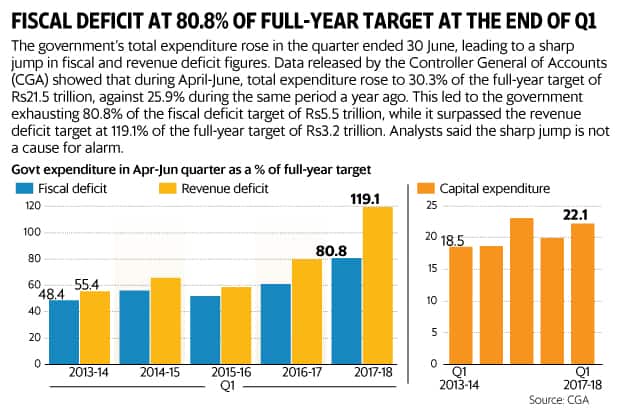 Revenue expenditure was 31.7% of the full-year target in the June quarter, as against 26.7% during the same period a year earlier.

“Together, the incremental subsidy and interest payment outgo (25.5% of full-year target), accounted for nearly half of the year-on-year rise in revenue expenditure in absolute terms in Q1 FY2018," Nayar said.

Despite the modest tax revenue growth recorded in the month of June, which was driven by a stagnation of excise duty collections and a mild dip in corporation tax inflows, the overall expansion of net tax revenues in the first quarter of 2017-18 was a healthy 14.5%, a tad lower than the last fiscal year’s collections.

“The pattern of monthly tax revenue growth may display some change in the months immediately after the introduction of the GST on 1 July," Nayar said.