Switzerland and South Korea are ahead of the US and Japan, while India is much further down the list at No. 53, according to a digital economy ranking

Larger economies may be in danger of losing the digital race to smaller and more nimble nations.

Several Nordic countries, Switzerland and tech-centric South Korea are ahead of the US and Japan, according to a digital economy ranking conducted by researchers at Tufts University in partnership with Mastercard Inc. India is much further down the list at No. 53.

When also factoring in nations’ relative digital momentum, the real stars are New Zealand, Singapore and the United Arab Emirates.

More than 170 indicators, including mobile broadband penetration and intellectual property laws, were used to rank 60 countries as of 2015, and to show how far they’ve progressed since 2008. This score, which the researchers called the Digital Evolution Index, quantifies the interplay between demand and supply within the digital economy, the level of support provided by governments and institutions and the pace of innovation.

The study places India and China, where “digital economy has been given high priority" by policymakers, in the break out zone. The 8 November demonetisation move nudged Indians towards digital payments, “albeit with mixed results", says the study. 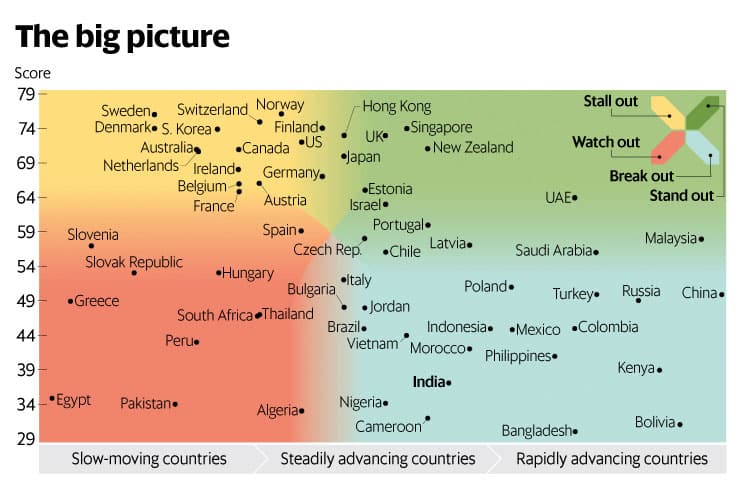 New Zealand has lately been pitching itself to tech entrepreneurs as a safe space to develop away from geopolitical strife. Other countries classified as ‘stand outs’ by the ranking include the UK, whose spend-happy digital consumers and vibrant web economy may give it extra leverage as it negotiates a post-Brexit future.

The advantages largely come down to political will and greater coordination in the digital environment, said Bhaskar Chakravorti, senior associate dean of international business and finance at The Fletcher School at Tufts University. As an example he pointed to electronic payment systems, where users, merchants and technology providers need to make the transition simultaneously. “That’s much more effective in a smaller economy like the UAE and much harder in an economy like the US that has so many players," he said. 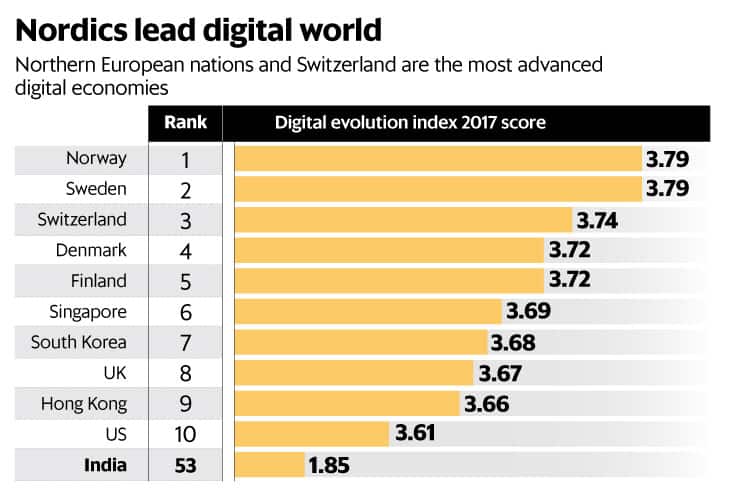 The US’s main weakness is under-investment in digital infrastructure, despite a tech-savvy consumer class and venture capital dollars pouring into start-ups. The greater emphasis on broadband access in countries like Norway and Finland, the first to make it a legal right, is partly why they’ve climbed to the top of the digital scoreboard. These countries, however, may soon be eclipsed themselves as their digital development plateaus. 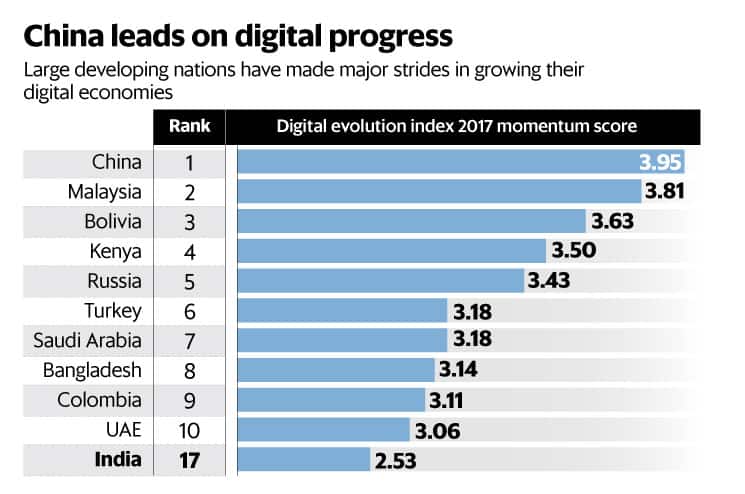