New Delhi: Wednesday’s dramatic political developments may seem to have opened up the contest for the presidential elections, while actually strengthening the prospects of vice-president Hamid Ansari, say analysts.

More importantly, they add, moves by the Trinamool Congress (TMC) and the Samajwadi Party (SP) may signal the initiation of a new wave of alignments and realignments in Indian politics that could see the creation of new alliances in the run-up to the crucial general election due in 2014. 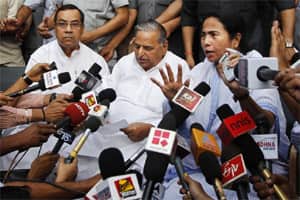 The two made the announcement at a hastily summoned press conference after a brief meeting. Interestingly, the meeting followed one between Banerjee and Congress president Sonia Gandhi, after which the TMC leader said Gandhi had indicated to her that the Congress’s first choice was finance minister Pranab Mukherjee and second, Ansari.

This is the closest the Congress has come to making an announcement on its candidate for the presidential elections. The joint statement by Yadav and Banerjee suggests that the contest may be even more open than suggested by Gandhi’s statement to Banerjee, but it does dim Mukherjee’s chances dramatically. Analysts say the Congress will also be cognizant of the political humiliation in store if it plays its cards badly and sees its candidate losing.

They add, however, that with the Congress offering two choices, and Yadav and Banerjee, three, a consensus seems likely, albeit difficult. And Ansari, they say, may end up being the accidental beneficiary. After all, Yadav would like to be seen supporting a Muslim candidate—Muslims form a chunk of the SP’s support base in Uttar Pradesh—and the Congress would like nothing more than to regain its standing among Muslims, especially in Uttar Pradesh.

“It has certainly strengthened Ansari’s chances. It looks like he will emerge as the winner in this crossfire," said Balveer Arora, a political analyst and former head of the political science department at Jawaharlal Nehru University.

Meanwhile, at least two Congress leaders, including a minister, admitted that Banerjee’s announcement on the Congress’s two alternative candidates had “more or less" killed Mukherjee’s prospects.

Interestingly, Yadav had earlier opposed Kalam’s name, while Banerjee has long had a fractious relationship with Chatterjee, formerly of the Communist Party of India-Marxist. Mukherjee, who has been the front-runner in the race so far, has already got the endorsement of the Dravida Munnetra Kazhagam, the Rashtriya Lok Dal and the Nationalist Congress Party. However, the Congress cannot get its candidate to win the presidential election without the backing of the SP, the Bahujan Samaj Party or the Left parties, apart from all allies, including the TMC.

The Left, which had earlier indicated its support to either Ansari or Mukherjee, has changed its stance since then and maintained that the United Progressive Alliance should pick a non-Congress candidate. Ansari was a diplomat before he became vice-president in 2007.

N. Bhaskar Rao, a political analyst who has observed the Congress for at least three decades, said everything that transpired on Wednesday was “pre-planned".

“This is a game gearing up for the 2014 election. By naming Manmohan Singh as candidate, the allies have stated that they do not want him as the prime minister," Rao said, indicating that there could be a major cabinet reshuffle after the presidential election on 19 July.

He added that Ansari would seem the best bet for the Congress, too: it would continue to retain the trouble-shooting services of Mukherjee; it can claim credit for making a Muslim the president; and it could split the opposition National Democratic Alliance (NDA). The Janata Dal-United, a key ally of the Bharatiya Janata Party (BJP), had strongly opposed views by party leader Sushma Swaraj who said that Ansari did not have the “stature" to become president.

The main opposition BJP did not publicly announce its stance on the presidential candidate. “NDA will comment after the Congress reacts to its allies’ demand," BJP’s Ananth Kumar said after the party’s core group meeting.

However, the BJP had initially proposed Kalam’s name for the post.

Kalam was the BJP’s nominee when he became president in 2002. The Congress vehemently opposed his re-election in 2007.

The Indian president is elected by an electoral college comprising members of the Lok Sabha, Rajya Sabha and state assemblies.