Mumbai: Four out of every 10 central government infrastructure projects are running behind schedule or have overshot original cost estimates, providing evidence of the heavy toll taken on project execution by delayed regulatory approvals, financial constraints and stalled land acquisition.

The cost of one of these projects is expected to increase 20 times and another is set to miss its original completion date by 21 years, according to data shared by the ministry of statistics and programme implementation (Mospi) with the Lok Sabha on 18 March.

According to the ministry, which tracks the progress of public works projects that cost ₹ 100 crore and above, it was monitoring 738 projects as of 1 January.

Out of these, 315 had run past their implementation date, leading to cost escalation. 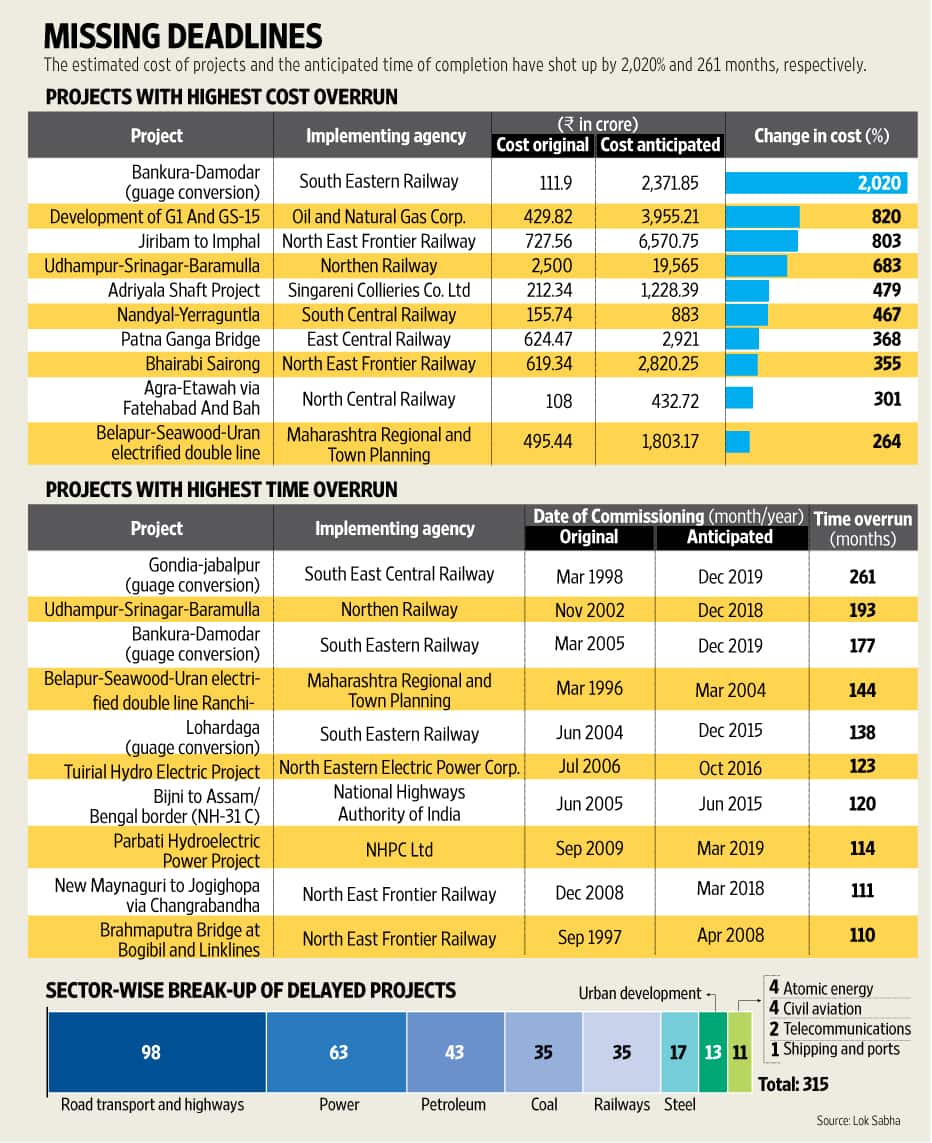 Infrastructure projects running into delays and cost overruns because of bureaucratic snarl-ups is not uncommon in India, where the problem has been compounded in recent years by an economic downturn that crimped finances as well as snags in completing land acquisition.

In one instance, the original cost of a railway track conversion project on the Bankura-Damodar stretch in West Bengal has increased more than 20 times from ₹ 111.9 crore to ₹ 2,371.85 crore since 1998, when it was first approved. The project, being executed by South Eastern Railway, is now likely to be commissioned in 2019, a delay of 14 years from its original timeline.

“Historically, the railways announced more projects than it has funds available for. One can now hope, with better project management being spoken about, these would be issues of the past," said Vinayak Chatterjee, chairman of infrastructure consulting firm Feedback Infrastructure Services Pvt. Ltd.

The gauge conversion project on the Gondia-Jabalpur stretch in Madhya Pradesh, undertaken by South East Central Railway, is facing a delay of 21 years. The ₹ 590.63 crore project is now expected to be completed in 2019. The original cost was ₹ 386 crore and the project was to be completed in 1998.

“Railway projects are stretched across long distances, and they involve land acquisition. Often, it involves making a choice between taking a shorter route and saving time and cost or opting for the longer route and increasing the construction time period and the costs," said Mahesh Vyas, managing director and chief executive officer at the Centre for Monitoring Indian Economy, a think tank.

“Such choices are politically sensitive. There is substantial uncertainty which causes time and cost overruns," said Vyas.

The linear nature of projects has had an impact on the construction of national highways. Of the 315 delayed projects, 98 are national highway projects—the highest number in any single sector.

The government is moving to get these projects started.

“To expedite completion of these (delayed) projects, various steps have been taken, which include streamlining of land acquisition, environment clearances, exit for equity investors, premium re-schedulement, securitization of road sector loans, close coordination with other ministries, revamping of dispute resolution mechanism, frequent reviews at various levels," minister of state for road transport and highways and shipping P. Radhakrishnan told the Lok Sabha on 9 March.

The oil and gas sector has also seen some significant project delays and cost overruns.

According to Mospi data, 24 projects undertaken by state-run hydrocarbon explorer and producer Oil and Natural Gas Corp. Ltd (ONGC) have been delayed.

ONGC’s project to develop G1 and GS-15 oilfields off the coast of Andhra Pradesh is facing the second-highest cost overrun of 820% and a delay of more than nine years.

“Reasons for delay would be of project-specific nature. For instance, in oil and gas, some may be delayed due to delays in defence and green clearances being awarded in the past," said Chatterjee of Feedback Infrastructure Services.

In the power sector, 43 projects of state-run Power Grid Corp. of India Ltd are facing delays. “...as per our records, 30 projects are facing delays, mainly due to forest clearance, right of way and land acquisition issues," said a PowerGrid official on condition of anonymity.

Singareni Collieries Co. Ltd’s shaft project at its Adriyala mine has suffered a cost overrun of 479% and a delay of more than two years. A shaft project involves building a vertical tunnel to access the bottom of a mine.

“The project cost is showing an increase as the expected cash flow from initial mining at this site did not match up to our original estimates. The cash flow would have funded the remaining project cost; given that was below expectation, we are seeing an increase in the original cost," explained a Singareni Collieries official who declined to be identified.

Two hydropower projects being overseen by North Eastern Electric Power Corp. Ltd (NEEPC) in Mizoram and Arunachal Pradesh have suffered a cost as well as a time overrun.

“Both these projects were facing local issues related to rehabilitation and land acquisition. Most of it has now been solved. For Pare (project), there were certain geological issues too," said an official at NEEPC who declined to be named.

Original project estimates should ideally include the original cost as well as the expected cost escalation in the event of delays, said Deep Mukherjee, senior director at India Ratings and Research Pvt. Ltd.

“However, agencies seldom work in such calculations to avoid questioning over the high cost quoted," he said.

Mukherjee does not see a reason to shelve these projects even if they are commercially unviable. “Not all government projects are meant to be commercially viable," he said. “What one needs to aim for is efficiency."