Not only does Delhi have a higher cost of operations compared with other cities, its utilization is also poorer

A feature by HowIndiaLives in the Friday edition of this newspaper shed light on the cost and revenue structures of different public bus undertakings in the country.

Digging deeper into the data, we can try and understand why public bus services in certain cities (such as Delhi) are so much more expensive to operate than those in other cities (such as Bengaluru or Chennai).

The problem with Delhi is that not only does it have a higher cost of operations compared with other cities and states, but its utilization (both in terms of fleet and passenger kilometres carried per bus) is also much poorer. These two factors help explain why Delhi’s bus system costs six times as much as Chennai’s in terms of cost per passenger kilometre.

While there are several costs associated with running a public bus system (capital costs, salaries, fuel, maintenance), it is not unreasonable to assume that the cost is directly proportional to the size of the fleet. The data (published by the roads ministry in the 2015 Statistical Yearbook by the statistics and programme implementation ministry) confirms this hypothesis.

A regression of the total annual cost of running a public transport system against the total fleet size (based on data for 43 public-sector bus undertakings over four years—2009-10 to 2012-13—shows fleet size explains as much as 90% of the variance in the total running cost (to use a technical term, the R square is 90%). On an average, the regression tells us that the total cost is about 3 million times the size of the fleet.

Chart 1 explains visually this relationship between total cost and fleet size, and Delhi is a prominent outlier, with the cost of running the bus system much higher than what we would expect based on numbers from other states and cities (other regions have not been marked on the graph to avoid clutter). While the data in this graph is from 2012-13, the graphs for earlier years look identical to this. In 2012-13, the actual cost of running Delhi’s public bus system was over 2.5 times what the number of buses would predict.

It is also interesting to note that barring Delhi, there are few outliers. There is no other undertaking for which costs are so different from what the size of the fleet would predict (the two points on the far right of the graph are Andhra Pradesh State Road Transport Corporation, which served the entire undivided state of Andhra Pradesh, and Maharashtra State Road Transport Corporation, which serves all of Maharashtra barring the big cities). Other large states with dense bus networks such as Karnataka and Tamil Nadu have multiple regional undertakings.

Delhi not only does badly in terms of having a per-bus cost that is 2.5 times that of other regions, it is a massive outlier in terms of revenues. While no public transport undertaking makes a profit, revenues broadly track costs, as Chart 2 shows (the regression in this case, for those who are interested, gives an R square of 92%). Delhi is once again a massive outlier (the red line is drawn at 45 degrees. All points below this line show that no transport undertaking makes a profit). On an average, the revenue of each transport undertaking is about 88% of its costs. For Delhi, this number is a low 31%. Again, there are two factors that drive Delhi’s transport revenues so low. Firstly, while the revenue per passenger kilometre is higher than that of other Indian cities, it doesn’t compare with the high costs of operations. Chart 3 (a version was published on Friday) shows Delhi doesn’t make much more than Mumbai or Pune on a per passenger kilometre basis, despite massively higher costs. This in itself might not have been that bad had Delhi managed to utilize its buses much more than other cities. However, as we saw on Friday, Delhi also has much lower utilization of buses compared with its peers. Each bus in Delhi, for example, only carries about 4,600 passenger kilometres, while a bus in Chennai carries more than three times as much (Chart 4).

Chart 4 also shows us that while Bengaluru and Chennai have broadly similar cost and revenue structures (on a per kilometre basis), the two cities have vastly different public transportation models, with Chennai having a utilization (in terms of passenger km per bus per day) more than one-and-a-half times that of Bengaluru. Passenger kilometre, as the name suggests, is a complex measure, and measures the total distance travelled by all passengers using the network each day. A higher passenger kilometre per bus per day could happen due to two reasons—a bus travelling farther and carrying more passengers. While there is no data to back this, it is likely that Chennai buses score over Bengaluru on both these counts—given the traffic situation and mix of buses in both cities.

Finally, we will examine whether the cost of travelling by bus has an impact on the popularity of the bus service in a city. This is a rather crude analysis, based on limited data from a handful of cities, but might provide some useful pointers. We look at the cost per kilometre for travelling by bus in different cities in 2011, and compare that with the proportion of commuters in each of those cities who take the bus (this data involves some approximation since it comes from Census 2011, and is aggregated at a district level, which has been converted to metropolitan region in a crude fashion). 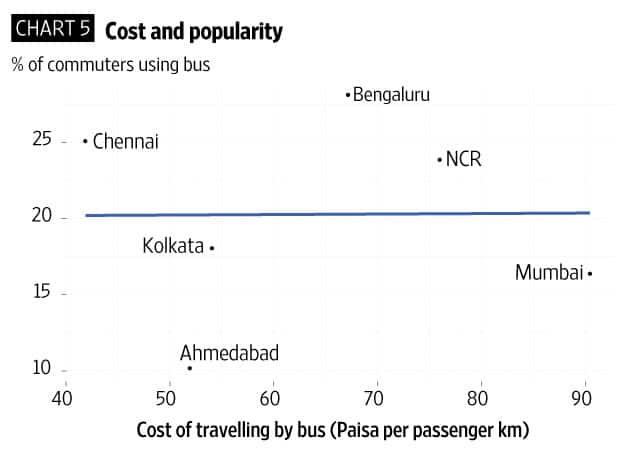 What Chart 5 shows us is that there is absolutely no correlation (the blue regression line is flat) between the cost of travelling by bus and the popularity of taking it in major Indian cities. Given that this is a limited sample and there are several other factors (Mumbai has a well-functioning local train system, for example), there might be something more to this. What also stands out from Chart 5 is that Ahmedabad, perhaps the only large city in India with a functioning bus rapid transport system, has a lower cost per kilometre compared with most large cities (barring Chennai); yet only 10% of the city’s population used buses to commute.