Flipkart had been redefining how Indians shop for a while. In 2014, a year in which it raised about $1.9 billion, Flipkart redefined valuations in the online retailing space. With a seven-fold growth in its valuation in about a year, Flipkart would have been ranked India’s 30th most valuable company had it been publicly traded. The valuation would also make it the third-most valuable consumer company in India, trailing behind ITC Ltd and Hindustan Unilever Ltd. Flipkart is now worth almost five times the combined valuation of the top four listed retailers. 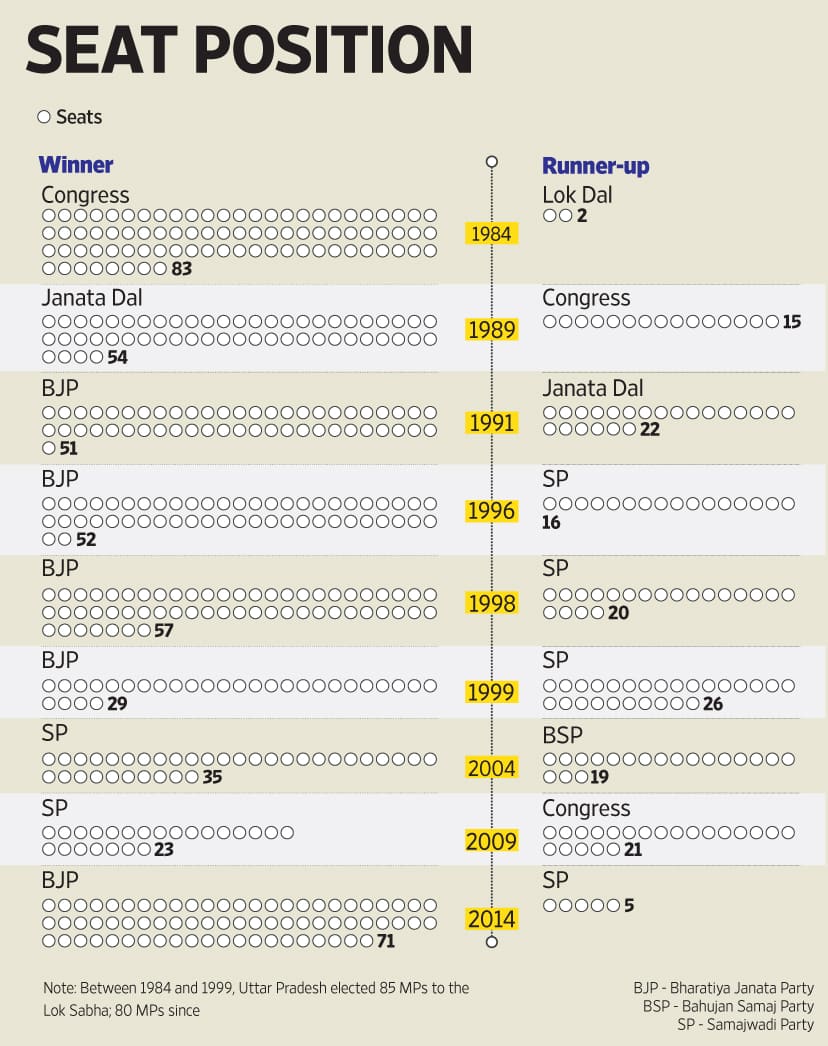 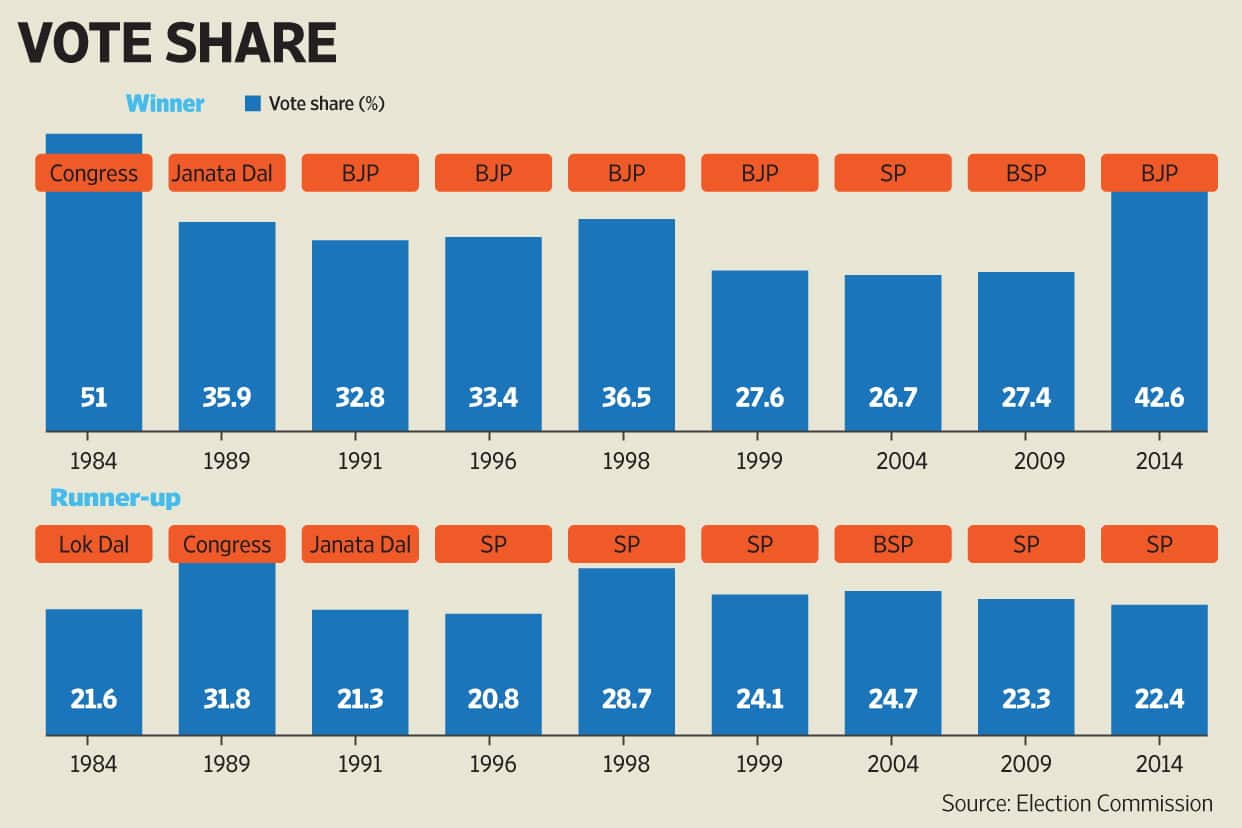 The road to Delhi, they say, goes through Uttar Pradesh, which elects 80 of the 543 Lok Sabha MPs. That the Bharatiya Janata Party (BJP) would improve significantly on its 2009 tally of 10 seats in this politically fragmented state was expected, but the extent of the sweep by the saffron party—smashing the three-fourth marker of 60 seats—in a way no party had done since the Congress rode a sympathy wave in 1984 was not. Uttar Pradesh delivered a quarter of the BJP’s MPs in the 2014 general elections. The last time crude oil fell below $60 a barrel, the world economy was dealing with the effect of a credit contagion that originated in Wall Street. Lower oil prices are an outcome of a weak global economy. Even India, which imports much of its oil, and hence spent the first half of the year fretting about the effect of high prices on its finances, tends to slow down when oil cools off. But this time, it can be different for India if the government can marshal a confluence of domestic factors—inflation, interest rates and government finances—for greater corporate investments.

Trouble in the skies Air crashes are rare. Statistically, one is more likely to die riding a bicycle than flying in a commercial aircraft. Aircraft going missing is even rarer. A commercial airliner disappearing with 239 passengers on board is off the chart. The fate of Malaysia Airlines Flight MH370, which disappeared on 8 March on its way from Kuala Lumpur to Beijing, remains a mystery. In the context of overall airline safety, 2014 wasn’t an outlier in terms of numbers. It was in its manner—one commercial plane missing and another shot down. The news in June of N.R. Narayana Murthy stepping down as executive chairman of Infosys came as a bigger surprise than the news of his coming back, a year ago, to the company he co-founded. The reasons were many. Murthy had said he could be around for five years. The task he set out to do (or the task everyone assumed he set out to do) remained unfinished. And in India, promoters are not inclined to let go of the companies they founded. But, in fact, Murthy was busy setting the system right for the long term—cost effectiveness, productivity and such. The news that most observers missed: Murthy was always going to leave Infosys—along with his son, Rohan—after the cleanup and after finding a good successor.

SpiceJet on the ground 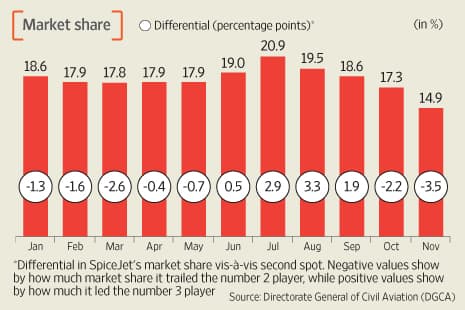 At the beginning of the year, SpiceJet was on a typical flight path for airlines in India—battling turbulence. Still, it was competing well for the second spot, even occupying it for three months, amid fleeting promises of a profitable ascent. Its fall in recent months has been swift and it appears only a white knight—co-founder Ajay Singh, who exited the airline in 2010, has shown interest—can now save it from going the way of Kingfisher Airlines. In November, when the market capitalization of Apple overtook the collective value of all companies listed on the Russian stock market, it was only partly seen as a weakness of the world’s ninth-largest economy, for Apple’s own market value had risen 33% during the calendar year. But in December, on the back of a huge drop in oil prices and the weight of economic sanctions imposed as a result of its military misadventures, the Russian economy seemed headed towards a crisis. The value of its stock market had gone even below that of Google, which was worth about half of Apple. 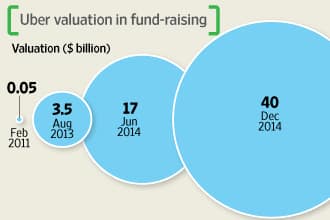 Even as the valuation of Uber, the taxi-hailing app company, went up and up, touching $40 billion based on the latest round of fund-raising, and the term “uberisation" of an industry gained ground, those very attributes seen as its strengths seemed to start troubling the company. Uber was global, and so were its problems. It was pushing boundaries, and existing regulations didn’t know where to place it. It was disruptive, and there was backlash from incumbents. It was scaling up fast, and there were concerns about its processes. As 2014 ends, Uber seems strong enough to tap opportunities, but it’s not clear if it’s strong enough to handle the accompanying risks. It has been nearly 40 years since the deadly Ebola virus first reared its head in two different regions in Central Africa (one near the Ebola river, from which the virus gets its name). But 2014 witnessed the worst-ever Ebola virus disease outbreak, with about 19,000 cases reported and 7,300 deaths, surpassing the combined figures for the last 40 years. While these were concentrated in three African countries—Guinea, Liberia and Sierra Leone—the scare extended to other countries, notably US and Spain, as well. The World Health Organization (WHO) says there are no licensed vaccines to combat this virus, but there are two potential candidates that are undergoing evaluation. It’s not the first time that a terrorist group has targeted children, or children at a school, or a child because she spoke for education. In the year that Malala Yousafzai and Kailash Satyarthi jointly won the Nobel Peace Prize “for their struggle against the suppression of children and young people and for the right of all children to education", the Pakistani Taliban gunning down 132 children in an army school in Peshawar, assaulted our senses. Boards of Indian companies have been male-dominated, and capital market regulator Securities and Exchange Board of India (Sebi) sought to change that. In February, seconding a clause in the revised Companies Act, Sebi instructed all publicly traded companies to appoint at least one woman to their boards by 1 October. Data from companies listed on the National Stock Exchange (NSE) shows that many have, some haven’t. Overall, women’s representation on company boards has increased, but parity and independence in the truest sense remains elusive. It was after 12 years that India’s central bank was issuing bank licences. And there were many corporate heavyweights who had applied, including Aditya Birla Nuvo, L&T Finance Holdings and Reliance Capital. Yet, the Reserve Bank of India (RBI) issued two licences, one of them to Bandhan. It was a case of being at the right place at the right time. The RBI wanted new banks to further financial inclusion and Bandhan had solid credentials in that space. It was the only large microfinance institution to be insulated from the excesses that ravaged the sector in 2010, and catapulted from number four in the sector to number one by 2013. It was partly because the case had meandered on for 18 years. It was partly because she was a chief minister in office and became the first one to be disqualified. On 27 September, a special court in Bangalore sentenced the then-chief minister of Tamil Nadu J. Jayalalithaa to four years in jail and fined her ₹ 100 crore in a disproportionate assets case. After spending about 20 days in jail, Jayalalithaa received bail of two months from the Supreme Court. In October, in one of its toughest and high-profile punishments, Securities and Exchange Board of India (Sebi) banned property developer DLF Ltd, its chairman K.P. Singh and five other company executives from the capital market for three years. The charge was DLF’s failure to provide key information on subsidiaries and pending legal cases at the time of its initial public offering in 2007. Its 2013-14 annual report points to a sterner capital market regulator: it is prosecuting more, and this is accompanied by fewer requests from market participants for settlement of cases by consent.