Rainfall in the entire country in August has seen a deficit of 23% so far, according to IMD data

New Delhi: A patch of red signifying deficit rains, cutting across the length of India from Haryana in the north to Kerala in the south, is threatening to worsen farm distress, shows rainfall data from the India Meteorological Department (IMD).

The June to September south-west monsoon which irrigates over half of India’s crop area was forecast to be above normal, but till 16 August has seen a 4% deficit compared to the 50-year mean or long period average (LPA). So far, in over a quarter of the country’s area comprising 10 of the 36 meteorological subdivisions, the deficit is at least 20% or more. Meanwhile, excess rains leading to floods in Gujarat, Assam and Bihar has led to loss of lives and crops. Data from IMD further shows that while rainfall for the entire country in June and July was 4% and 1.7% above normal, respectively, rainfall during August, a critical period for agriculture, has seen a deficit of 23% so far.

While deficit rains may not impact overall foodgrain production, farmers in parts of Maharashtra, Madhya Pradesh and Karnataka say the ongoing dry spell will lead to large losses as crops like soybean, pulses, cotton and millets are facing severe moisture stress. 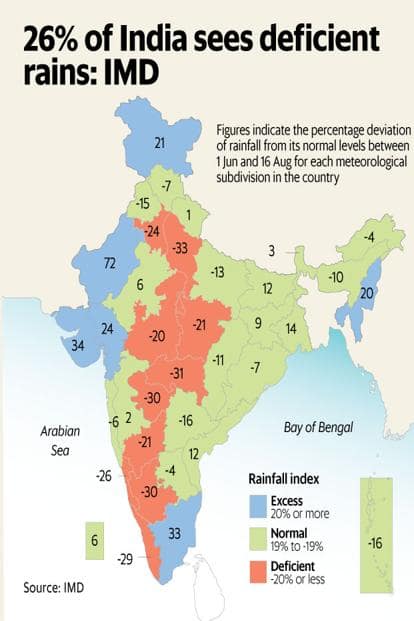 Data from IMD shows that in Marathwada and Vidarbha regions of Maharashtra, farm suicide hot spots, the seasonal deficit is 30% and 31%, respectively. In Kerala, and northern and southern interior Karnataka regions, the rainfall deficit is 29%, 21% and 30%, respectively, compared to the normal.

Even in northern Indian states, in Haryana, western Uttar Pradesh and Punjab, the deficits are 24%, 33% and 15%, respectively, implying farmers are incurring higher fuel costs to water their crops.

“In most villages, the soybean crop has died on the field alongside pulses like moong (green gram) and urad (black gram), despite farmers resowing their crop," said Sattar Patel, a farmer from Latur district of Maharashtra, where, during an acute drought in 2015, the Indian Railways was pressed into service to supply drinking water. “There were no rains for a month in most districts of Marathwada... since soybean and moong are short duration crops, farmers can no longer resow and they have lost a season’s earnings to the prolonged dry spell," Patel added.

“Anticipating poor rains, farmers did not sow water intensive crops such as paddy and planted very little sugarcane, but even dry-land crops like ragi and jowar which they were banking on have died," Kammardi said. “We are not sure if the cotton and pulses planted wherever there was some moisture in the soil will survive."

Data from the agriculture ministry shows that (till 11 August) while overall planting of kharif or monsoon crop was marginally higher compared to the year before, planting of arhar or pigeon pea, a popular pulse variety, is 19% lower. Planting of oilseeds such as soybean and groundnut is lower by 9% and 13%, respectively, and that of coarse grains such as jowar (sorghum) and ragi (finger millet) is lower by 12% and 36%, respectively, year on year.

“There is no doubt that farm incomes are stressed and the situation in bad in pockets, but overall foodgrain production is unlikely to see any large dips," said Prerana Desai, vice-president, research, at Edelweiss Agri Services and Credit. “While oilseeds output may turn out to be lower, overall production will likely come off the record high of last year (2016-17) and move towards normal," she added.