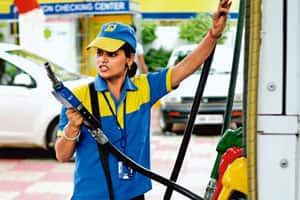 Jha, a printing executive at the Noida, Uttar Pradesh, press of HT Media Ltd (which publishes Mint), belongs to Samastipur, Bihar, and joined HT Media four years ago. He looks after preventive maintenance at the press, which requires him to run systematic procedures to prevent breakdowns. He says that before he took this job he had not realized a printing press had such large machines. He lives in Greater Noida and says he is happy with his job profile and the kind of work he does.

For the last 16 years, Nawaz has worked at Bosch Ltd’s Adugodi factory on Hosur Road, Bangalore. A contract worker originally from Kolar in Karnataka, Nawaz lives in Bangalore and works in the packing department of the assembly line. His low salary is one of the main reasons he hasn’t yet married; the amount is not enough to start a family. The company employs around 1,000 contract workers who work on a project basis but get a fixed monthly salary. Currently, Nawaz lives at Banashankari 2nd Stage, around 9km from the factory, with his parents and four siblings. He works an 8-hour shift, and says one good thing is that the company gives free meals to all workers and bonus for any extra hours put in. He says he looks forward to May Day every year in expectation of a bonus, and hopes that the firm will announce a salary raise soon.

Moore, a construction worker, is from Jhansi, Uttar Pradesh, and moved to Delhi in search of a job after he failed his class X exam. He has been employed with Larsen & Toubro for seven years and is currently working at a mall construction site in Noida. He says he is happy with the company because it takes care of the workers and ensures there are adequate security measures on the site—no worker can work without a helmet and there is an ambulance present at the site. He says that since he is not married, the sum is adequate for now.

Pandey works on the sets of a daily television soap in Mumbai as a light man. Though he hails from Uttar Pradesh, he now stays in Goregaon, Mumbai. He works a 12-hour shift and has mixed feelings about his job: It is hard work and he has to face many unexpected problems; recently, for instance, there was a blackout on the sets because of the rain, and he had try and fix the problem with a limited set of tools. Pandey says dealing with high-voltage electricity equipment every day means there is always the fear of an accident, but since he has not been involved in any so far, he tries not to worry too much about this.

Singh works with the Frontier Biscuits Factory Pvt. Ltd in Bahadurgarh, Haryana, as a mistry and has been with the company for 23 years. His job includes kneading the dough, cutting the biscuits and baking them in electric ovens. Singh is from Uttarakhand and has studied till class X. He says the best thing about his job is the fixed hours—9.30am-5.30pm daily with a holiday on Sunday, something not many others enjoy in a bakery job. His steady job with the company has helped him buy a small house in the Bahadurgarh area.

Ram has had a permanent job as a gangman with the Indian Railways since 2004. Before this, he was a daily wage earner doing the same work. His job includes carrying out repairs on railway tracks. Dohrai Ram lives in Sahibabad, Ghaziabad, with his family in a quarter allotted by the Railways. He has seven children—four sons and three daughters. He is thrilled at the idea of working with India’s largest employer and says he is well looked after. Some of the perks of the job are a free railway pass to travel once a year, an 8-hour work shift and access to medical facilities.

Kumar works as a mechanic at the Shiv Service Station, Dwarka, Sector I, New Delhi. His main task is to service Hero motorcycles. He is married and has two children and lives in Mahavir Vihar, near Dwarka. He feels happy when a customer appreciates his work. This machine head especially enjoys taking apart a motorcycle engine, and then putting it together again. Kumar trained in automobile mechanics at the Industrial Training Institute, Faizabad, Uttar Pradesh, in 2006. He has been working at the Shiv Service Station for six years. Currently, he works an 8-hour shift.