New Delhi: In July 2008, international oil prices spiked to a record $148 (Rs6,852.4 today) per barrel, ruining the fiscal math for countries such as India that are overwhelmingly dependent on imports. In the case of India, which imports 80% of its annual consumption, the oil import bill was up 26% to Rs3.4 trillion in 2008-09. It could have been worse but for the fact that the onset of the global meltdown choked off some of the domestic demand as manufacturing firms scaled down capacities.

The latest oil shock has re-emphasized the urgency for India to evolve a solution to secure its energy needs such that they mitigate, if not preclude, such economic shocks. All the more so because the existing energy plan envisages India’s dependency on imports to increase to 90% by 2030—a period in which it strives to achieve double-digit growth as part of a strategy to push for greater inclusiveness. This is not surprising given that its consumption of petroleum products has grown at an annual compounded growth rate of around 4% in the last seven years and, according to the International Energy Agency, consumption is expected to rise to 135 million tonnes (mt) per annum by 2012 from 112 mt now.

Broadly, the required energy security strategy has two strands. At one level the country needs to secure stable supplies of energy to meet growing demand. At another, India needs to evolve fuel efficiency standards that will not only ensure efficacy in consumption but also incentivize alternative forms of energy such as solar power.

While the move by the Congress-led United Progressive Alliance (UPA) government in June to free prices of petrol totally and that of diesel partially has created a fresh inflationary impetus, it is also part of a larger plan to manage demand for petroleum products and reduce fiscal pressure on the Central exchequer through funding of subsidies incurred by selling petroleum products below cost price.

The situation in power generation, too, is equally precarious. India is not generating enough electricity to sustain its economic growth and the country is facing a peak power shortage of 13% between 5pm and 11pm. Even if the generation capacity is enhanced, critical issues relating to transmission and distribution—which lead to a leakage of 40%—have to be resolved.

Seized of the problem, UPA set up a group of ministers (GoM) under the chairmanship of Pranab Mukherjee to ensure an “external interface for energy security". “The GoM will look for opportunities across energy sectors... It will look at energy resources available in other countries and how to go about securing them," power secretary P. Umashankar said.

At the moment, state-owned firms such as ONGC Videsh Ltd (OVL), the overseas arm of Oil and Natural Gas Corp. Ltd (ONGC), are locked in a fierce competition for energy assets with rivals including China National Petroleum Corp. (CNPC), Sinopec Corp. and CNOOC Ltd in Africa and South America. According to the BP Statistical Review of World Energy, the Asia-Pacific region accounted for more than 80% of global growth in oil refining in 2009, largely due to a capacity increase in India and China. 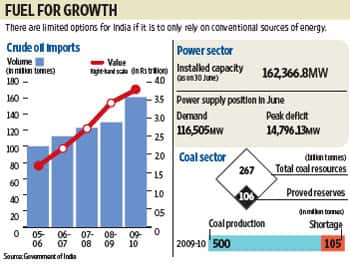 The outlook on natural gas supplies is similar. While applications requesting gas allocations for new power plants requiring over 550 million standard cu. m a day (mscmd) of gas have been received, the country’s current production is only 142 mscmd—implying that 400 mscmd will have to be imported, though this could drop marginally when domestic production picks up over the next few years.

Clearly, there are limited options available to India if it has to rely on conventional sources of energy alone. The imperatives for exploring alternative and increasingly renewable energy options have grown as the world seeks to evolve a consensus on containing climate change. Even if India was to extract concessions at the ongoing negotiations, its options are going to be limited.

“It is obvious that India needs a durable energy security policy considering our country’s energy requirements. We need to diversify our sources so that we are less dependent on imported oil that depletes our foreign exchange reserves. We need to get into new and renewable energy sources," said K.V. Rajan, former secretary, east, in India’s ministry of external affairs.

Padmaparna Ghosh contributed to this story.