Supreme Court quashes Section 66A of IT Act

New Delhi: The Supreme Court on Tuesday struck down a sweeping law that allowed police to jail people for online posts thought to be offensive, with potentially far-reaching consequences for civil liberties and the right to free speech in India.

After three years of protests by free speech campaigners and others, a bench comprising justices J. Chelameswar and Rohinton F. Nariman held the section 66A of the Information Technology (IT) Act, 2000, to be unconstitutional.

“Section 66A is unconstitutional and we have no hesitation in striking it down," declared justice R.F. Nariman, reading out the judgement. They added: “The public’s right to know is directly affected by section 66A."

The apex court ruled that the controversial section 66A is “open ended, undefined, and vague" with every expression used in it “nebulous in meaning".

“Section 66A is cast so widely that virtually any opinion on any subject would be covered by it, as any serious opinion dissenting with the mores of the day would be caught within its net," the court said.

The ruling was widely welcomed by free speech defendants who have been at the forefront of a campaign against the provision that has been used by the police in recent years to arrest social media users for posting comments that others deemed offensive.

“Internet as a medium is meant to be free and transcend territorial borders with minimal regulation and monitoring," said R. Chandrashekhar, president of the National Association of Software and Service Companies, an industry lobby group. “The IT Act has well served the objective to provide the legal framework for data security and Internet laws in the country. The changes enabled by the Supreme Court judgement would provide much-needed boost to the citizens of the country and help the objective of a digitally connected India."

Since the first public interest litigation (PIL) was filed by law student Shreya Singhal in 2012, the apex court has heard 10 cases challenging various provisions of the IT Act, including section 66A, which punishes sending offensive messages through communication services, including posts on social media websites such as Facebook. 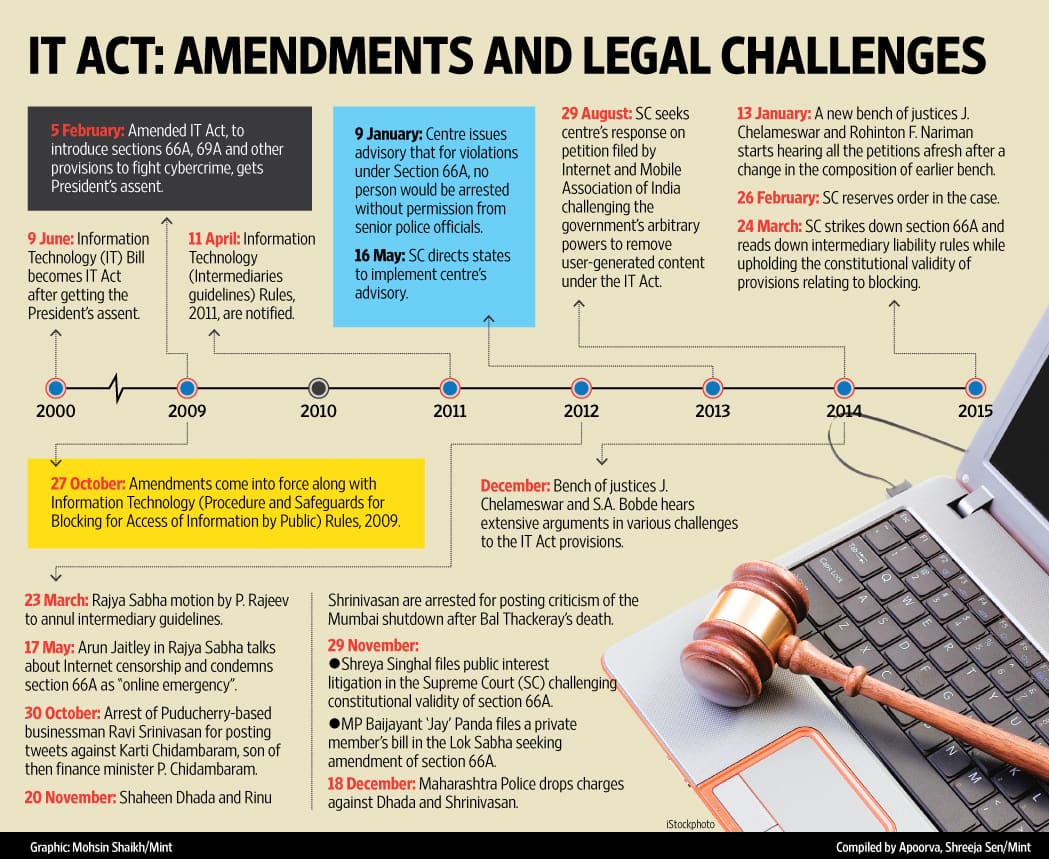 “I am really happy. The Supreme Court has upheld the fundamental right to freedom of speech. The Internet is a medium that touches everyone. Here, the individual Indian needed to be protected," Singhal said.

Quoting from the preamble to the Indian Constitution, the judgment emphasised the “paramount significance" of the “cardinal value" of the liberty of thought, expression and belief.

The 122-page verdict drew a distinction between discussion, advocacy and incitement, saying, “it is at this stage (incitement) that a law may be made curtailing the speech or expression that leads inexorably to or tends to cause public disorder or tends to cause or tends to affect the sovereignty and integrity of India, the security of the state, friendly relations with foreign states, etc".

Section 66A, however, has no proximate connection with the issue of public disorder, the judges said.

“The nexus between the message and action that may be taken based on the message is conspicuously absent—there is no ingredient in this offence of inciting anybody to do anything which a reasonable man would then say would have the tendency of being an immediate threat to public safety or tranquillity," the judges ruled.

The court ruled that section 66 was unconstitutional “as it takes within its sweep protected speech and speech that is innocent in nature and is liable therefore to be used in such a way as to have a chilling effect on free speech..."

“It is clear that the right of the people to know—the marketplace of idea—which the Internet provides to persons of all kinds is what attracts section 66A. That the information sent has to be annoying, inconvenient, grossly offensive etc., also shows that no distinction is made between mere discussion or advocacy of a particular point of view which may be annoying or inconvenient or grossly offensive to some and incitement by which such words lead to an imminent causal connection with public disorder...," the court said. The bench rejected the centre’s argument that more conditions could be read into 66A to prevent its abuse, saying that it would amount to “wholesale substitution", something the court could not do.

Law student Singhal first approached the apex court after the arrest of two girls near Mumbai in 2012 for criticizing on Facebook the city’s shutdown for the funeral of Shiv Sena chief Bal Thackeray.

In her petition, Singhal had argued that “unless there is judicial sanction as a prerequisite to the setting into motion the criminal law with respect to freedom of speech and expression, the law as it stands is highly susceptible to abuse and for muzzling free speech in the country".

Senior lawyer Soli Sorabjee, appearing for Singhal, argued that section 66A was unconstitutional because it violated the fundamental right to freedom of speech and expression under the Indian constitution.

Another petition was filed by industry lobby Internet and Mobile Association of India (IAMAI), challenging the arbitrary powers that the IT Act confers on the government to remove user-generated content.

The central government’s stand in the apex court, which seemed to have been recalibrated after a change in the government last year, has been that the penal provisions of the IT Act 2000 were not intended to curb freedom of speech.

It argued that, instead, section 66A was designed to fight cyber crime and had nothing to do with citizens’ freedom of speech and expression. The government said these provisions sought to protect the right to life of Indian citizens and that a minimum amount of regulation of cyberspace was necessary.

According to the Supreme Court, “it is not open to the state to curtail freedom of speech to promote the general public interest".

Critics have also challenged section 69A of the IT Act, which allows the central government to block “information" for “public access" over a “computer resource" if the same is “in the interest of sovereignty and integrity of India, defence of India, security of the state, friendly relations with foreign states or public order or for preventing incitement".

While striking down 66A, justices Chelameswar and Nariman upheld the constitutional validity of section 69A and section 79 and the rules made under it dealing with the liability of intermediaries.

However, the court said the intermediaries will not be liable if they fail to take down content upon request from third parties.

“This is for the reason that otherwise it would be very difficult for intermediaries like Google, Facebook etc. to act when millions of requests are made and the intermediary is then to judge as to which of such requests are legitimate and which are not," the court said in its judgment.

With regard to section 69A, the court held that it is a narrowly drawn provision with several safeguards, noting that content could be blocked only when the central government is satisfied that it is necessary to do so and that the provision provides for a hearing before a committee to determine the necessity of blocking the content.