Iran has expressed the hope that officials from India, Iran and Afghanistan will be able to finalize plans to develop the Chabahar port before an India-Iran joint commission meeting scheduled for November.

Iran’s envoy to India Seyed Mehdi Nabizadeh said his government was keen to develop the port, and free trade and industrial zone at Chabahar in the south-eastern part of the country as part of an alternative access route to land-locked Afghanistan and Central Asia.

India and Iran had agreed to look at developing the Chabahar port in 2003, during a visit to India by the then Iranian president Mohammad Khatami, but the venture has not made much progress. Given India’s often hostile relations with Pakistan, India views the port as an alternative route not only to Afghanistan, but also to resource-rich Central Asia. 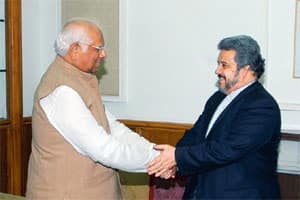 Nabizadeh said one of the reasons for the delay on Chabahar was because the port was previously not part of the free trade and industrial zone. That has changed.

“Parliament approves free trade zones and recently the port was included," Nabizadeh said. “Before the joint commission in November, we should finalize the case of Chabahar."

An Iranian diplomat in New Delhi said among the issues that needed to be resolved was that of contractors.

“Our people are saying why do we need Indian contractors, we have our people and we can use them to build the port," he said.

A person familiar with developments on the Indian side said Iran was looking for Indian investment in dollars to develop the port and associated infrastructure. It was not keen on project imports as payment for oil exports.

India has been finding it difficult to pay for the oil it buys from Iran due to US and European sanctions targeting financial institutions that route payments from the buyers of Iranian oil.

Iran is under sanctions because Western countries suspect that Tehran is developing nuclear weapons under the cover of a civilian programme. India’s bilateral trade with Iran stands at more than $15 billion (84,000 crore), of which Indian exports constitute less than $3 billion.

The government has said that it has reduced oil imports from Iran due to payment issues though Nabizadeh said in February that both sides had worked out an agreement under which New Delhi would pay 45% of the dues in rupees and Tehran will use this money to pay for imports.