Amritsar/Gurgaon: The rain falls hard and Pankaj Jindal ducks for cover from the courtyard of Khalsa College in Amritsar. “Turnout might be less," he mutters, surveying the meagre student population around him at a campus that looks less like a college and more like a Mughal palace.

In Amritsar, the north India head of the recruitment, training and placement firm Aspire Human Capital Management Pvt. Ltd tries not to get his hopes up too much. After all, earlier in the week, at an English academy in town, he talked to 100 candidates about potential jobs. 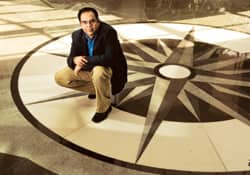 And so at Khalsa College, Jindal delays the presentation by half an hour and waits for the sun. It finally peaks out and a trickle of young women in salwar suits and T-shirt-clad young men follow.

As hundreds of firms try to grab pieces of the skills development pie, selling courses to students or selling training to companies, Aspire is trying something a little different: a merger of the strategies.

Founded by former chief executive officer of WNS Knowledge ServicesAmit Bhatia just over a year ago, the firm pioneered a model that relies on number crunching to find, train and deploy rural graduates, and match India’s millions of unemployable youth with companies starved for new recruits.

“It is a new, innovative concept," says Harmit Sethi, who heads skills development at the trade group Confederation of Indian Industry, or CII. “They are identifying the shortcoming, shortlisting candidates, and correcting the shortcoming."

Instead of picking up the top tier of graduates, Aspire targets the rest, and provides them with short, focused classes to get them up to speed. At the 22,000-student Lovely Professional University in Jalandhar, for example, a sleek glass Aspire storefront is outfitted with modernist peach furniture and flat screen monitors to function as a year-round counselling and testing centre.

“McKinsey says that only 22% of graduates are placeable," Lovely Professional University placement director Subash Kannaw says, referring to a McKinsey and Co. study on India’s graduates. “What about the rest? These are the people that make them placeable." Kannaw says he wants his own son to train with Aspire, too. 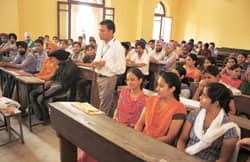 And, perhaps the most unusual aspect of Aspire’s business is that it doesn’t offer courses on a retail basis—the company only trains students that it already has jobs lined up for.

On one recent weekday at Aspire’s new headquarters and training centre in Gurgaon, a roomful of recruits had exchanged salwars and T-shirts for pressed, collared shirts, and closed-toe shoes, and hesitantly answered questions on the difference between “beauty" and “beautiful" and “instruction" and “instructions".

At times, nearby construction workers’ jackhammers drown out the students’ soft voices, and the instructor repeats, “Don’t be nervous, take a deep breath". On other topics, though, the students are quick learners. The instructor’s question, “If you are talking to American customers, can you start talking in Punjabi?" is greeted with a chorus of “No".

From setting up a nationwide network of recruiters in smaller cities and towns, to a few centralized training centres in major cities, to breaking down each job profile into dozens of measurable skills, Aspire is trying to learn from the mistakes of other companies that couldn’t quite nail the “train-to-hire" model.

“There is going to be about 20 crore more working population added in the next 10 to 15 years," Bhatia says, with the earnest air of a social reformer, “and we need to keep this asset from becoming a liability."

“In our view", he continues, switching gears to describe how the Aspire model owes more to the manufacturing sector than to the human resources industry, “the only answer is, people have to start running the whole supply chain."

The wide gulf from hinterland to high-rise that the company has to bridge was on display at Khalsa College. The room that Jindal spoke in scaled two storeys, with wood-panelled ceilings, fans mounted on the walls, and wooden benches attached to long flat desks with a century’s worth of carvings.

Giant arched doors led to the wrap-around terrace. Students huddle in groups as he starts with the basics.

What is a business process outsourcing (BPO)? “When you have a problem with Airtel, and you call someone," he says in a mix of Hindi and English, “Who picks up?"

What is Accenture Ltd, one of the employers he is in Amristar to recruit for? “Reliance does Rs1 trillion turnover each year, and Accenture is bigger."

What is Aspire? You have an email address, but you don’t need to have a server because it’s too expensive, he says to the crowd. “We are like the server," he says.

For his audience, the more basic the analogy, the more helpful.

The day at Khalsa College represented the first job interview for most of the graduates, and many had only vague ideas of what kind of job they wanted, and even vaguer ideas of what kinds of jobs were available. “A computer job," or “some work related to computers" was the most common position sought, and many graduates were reluctant to leave Amritsar, work a night shift, or take a job that paid less than Rs10,000-15,000 per month.

“I am just coming to experience it," says Sonia Mahajan, a 2008 graduate who said the Aspire event was her first introduction to an employer. “I have everything, but I don’t have confidence."

Others planned to return to school. Vikas Mahajan, who finished a degree in computer maintenance, was waiting on results to enrol in a postgraduate course. His classmate, Rajwant, was looking for a part-time job so that he could continue his studies.

Aspire’s strike rates might be low at each school it visits, but it’s banking on its ability to spread out and cover wide swathes of India to make it a successful enterprise. It is too soon to tell what Aspire’s success rate is, but Bhatia said 95% of those who have gone through Aspire stick with the job. Clients say that Aspire does a lot of hand-holding with its hires, and that the batches they’ve received so far have been “pretty good".

The company’s network of recruiters—or “talent scouts", in Aspire-speak—have operations in smaller cities and towns such as Sonepat, Rohtak, Jammu, Phagwara, Srinagar, Siliguri and Guwahati.

Aspire is hardly alone in trekking out to the countryside in search of new recruits.

“Every telecom company can’t go out and build its own network," says Bhatia, who also helped in creating and leading the McKinsey Knowledge Center India Pvt. Ltd, the consulting giant’s offshore research operations. “We’re (also) building talent supplies for others to tap."

The secret sauce at Aspire is a method that gets rid of every impression-based, qualitative measure throughout the entire recruitment and training process. The idea came from, of all things, procurement.

When Bhatia launched Aspire, he relied on a model he developed with Freemarkets.com, a website that created an auction for manufacturing buyers and suppliers to interact, and brought transparency to a field that was anything but.

Freemarkets.com forced suppliers to detail every piece that went into a product to a granular enough level that it could be standardized and compared, so buyers didn’t have to rely on backroom negotiations to cut deals.

In a replica of that model, Aspire breaks down each job description into hundreds of attributes. Spoken skills, for example, are divided into dozens of categories such as harsh consonant sounds, tenses, articles, and whether or not the candidate has a sing-song intonation. Each factor is weighed according to how important it would be for the job description, and each mistake is categorized and compiled to get a final score.

Even though Aspire’s business model neatly reflects Bhatia’s experience in both managing outsourcing operations and managing supply chains, his inspiration stems from something closer to a streak of social entrepreneurship. “India is a dual economy," he recently told a roomful of human resources professionals at a conference co-sponsored by Aspire and CII. “It’s disturbing. We need to make it one."

So Bhatia and Aspire are betting that using science to “fix" the unemployable is the only way to get rural graduates into international economy. At Khalsa College, around 30 of the candidates made the cut to train for a sales job in Punjab with ICICI Lombard General Insurance Co. Ltd that paid almost Rs20,000 per month, and another few passed the communication test to train for a job with WNS in Gurgaon.

Amrinder Singh, a computer science graduate from Khalsa College, says he would rather pursue a postgraduate degree than join his family’s dry fruit business, if a job didn’t come through. “There is not too much of scope in Amritsar," he says, “if you want to do something, you have to think bigger."