New Delhi: The Supreme Court on Tuesday struck down the government’s policy of giving subsidies to Haj pilgrims and directed that it be progressively “eliminated" within a period of 10 years.

“We hold that this policy is best done away with," a bench of justices Altamas Kabir and Ranjana Prakash Desai held.

The bench also directed the government to reduce to two the number of its representatives in the Prime Minister’s goodwill delegation. It said it will look into the functioning of Haj Committee of India and it process for selecting people for Haj pilgrimage. 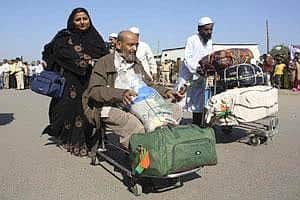 The bench while hearing the plea of the Centre had expanded the purview of the plea and decided to look into the legality of the government’s policy on granting subsidies to Haj pilgrims.

During the hearing in the case, the Centre had defended the policy of giving subsidies to the Haj pilgrims and had said it had framed guidelines so that people get subsidies only once in their lifetime.

In an affidavit, the Centre had told the court that it has decided to restrict Haj pilgrimage at government subsidy to Muslims only as a “once in a lifetime" affair as against the existing policy of “once in five years". It had said the new guidelines have been framed to ensure that priority is given to those applicants who have never performed Haj.

The government, however, had refrained from disclosing the amount of subsidy being incurred by it for 2012, saying, “The exact figure in respect of the travel subsidy to the pilgrims going through Haj Committee of India for 2012 will be known after the Hajis completed their Haj journey and return to India."

The apex court had earlier expressed its dismay at the practice of sending official delegations to accompany the pilgrims and had asked the Centre to furnish entire details regarding Haj subsidy, as also about the criteria adopted.

“These goodwill delegations need to be scrapped altogether. They are no longer relevant. Even a team of 9 to 10 persons is not required," the bench had observed. The bench had also pulled up the Centre’s practice of “politicising" Haj by permitting official delegations to accompany the pilgrims, for which the government offers huge subsidy, saying, “It’s a bad religious practice."