New Delhi: Global urban consumption is expected to grow by $23 trillion between 2015 and 2030 at an annual growth rate of 3.6%. These are the projections made by McKinsey Global Institute’s new report Urban World: The Global Consumers to Watch.

According to the report, only nine groups of “consumers to watch" are projected to generate three-quarters of global urban consumption growth from 2015 to 2030. Of these, just three groups have the scale and spending power to reshape global demand and the world economy. These are:

• China’s working-age consumers (15 to 59 years). Their number will expand by 20%—an additional 100 million people. Their per capita consumption is expected to more than double. By 2030, they will spend 12 cents of every $1 of worldwide urban consumption. 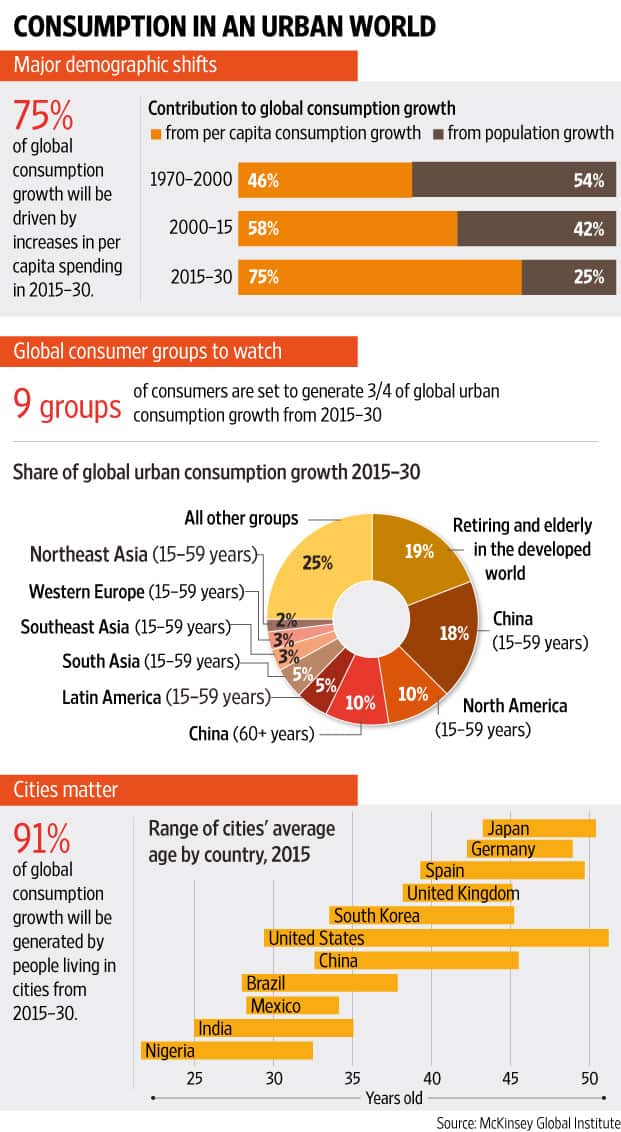 These three groups are expected to generate $11 trillion—48%—of global urban consumption growth from 2015 to 2030. An additional 28% is projected to come from six groups that are either large but no longer growing in their numbers—the working-age populations of Western Europe and Northeast Asia (which includes Japan and South Korea)—or small but growing very rapidly, namely Chinese consumers aged 60-plus, and the working-age populations of South Asia, Southeast Asia, and Latin America.

• 79% of consumption growth (2015-2030) in India will come from increased per capita consumption: urban population growth will be moderate with a 2.2% compounded annual growth rate (CAGR).

• The demographic profile of Indian cities is diverse and aging will affect specific cities more than others: All cities in India are aging, particularly those in the state of Kerala.

• Consumption growth will be concentrated in Mumbai, Delhi, Ahmedabad, Hyderabad and Bangalore.

The shifts in global consumption mean that companies need to work even harder to compete for the purchasing power of varied and highly dispersed pockets. The report narrows down on three aspects of the challenge:

• Footprint matters for success in a shifting consumer landscape. With consumption increasingly dependent on per capita spending, footprint matters. Companies also need to adapt continuously to the evolving demographics and consumption patterns of cities—and even neighbourhoods within cities.

• Companies with the skills to develop tailored products and services to meet the needs of an increasingly complex consumer landscape can prosper. Those companies that have the skill to manage multispeed, multifaceted, and increasingly diverse markets are more likely to succeed. In many markets, companies may need to strengthen their skills in managing overlapping products and brands.