The Bofors scandal that broke in 1987 marked a watershed for India in more ways than one. It was the first time corruption became an intensely public, political issue—now the norm for most issues courtesy 24x7 television —with the Congress party and then Prime Minister Rajiv Gandhi eventually ending up on the losing side in the 1989 general election.

The public fury was stoked by diligent investigative journalism that uncovered the scandal, mostly by the Chennai-headquartered The Hindu and reported by Chitra Subramaniam-Duella and N. Ram. Sten Lindstrom, former chief of the Swedish police, revealed himself to be Subramaniam-Duella’s very own Deep Throat in an interview carried by media website thehoot.org on Tuesday.

The Hindu broke its first big story on the issue on a day when Gandhi happened to arrive in Chennai on a visit. “It was seen as a conspiracy but it was pure coincidence," said Ram, former editor-in-chief of The Hindu, published by Kasturi & Sons. The newspaper could not delay the story as rivals were on the same trail, Ram added.

Swedish radio had first reported on the deal, said Ram, but then suddenly stopped, possibly under pressure, but not before dropping hints about several people who might be involved.

“We got into the act and had a team working on the story. I directed the investigation," Ram said, adding that Subramaniam-Duella, the paper’s then stringer in Geneva, struck gold in terms of documents related to the story. That was in April 1988. 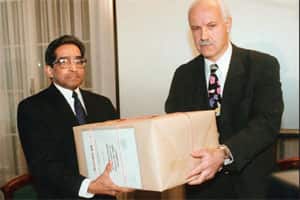 Flashback: A 1997 photo of Swiss Federal Bureau of Police vice-chairman Rudolf Wyss (right) handing over a box with documents on the Bofors case to Indian envoy to Switzerland K.P. Balakrishnan. AP

Besides publishing the documents, the paper carried several interviews and analytical pieces on the scandal. “The editor of the paper (at the time) G. Kasturi and news editor K. Narayanan were involved in the layouts of these stories," he said.

The differences on reporting the Bofors scandal within The Hindu crept in much later in 1989 and were very “dramatic", Ram said, referring to a difference of opinion among members of the Kasturi family that owned and ran the paper that eventually resulted in Ram effectively being exiled from the daily.

Then defence minister K.C. Pant even invited Ram to dinner to try and get him to “soften" his stand on Bofors. The attempt failed and Pant eventually resigned.

The Hindu’s Bofors expose was recently featured as one of the 50 great stories produced by Columbia Journalism School alumni—Ram is one himself—in the past 100 years.

While it wasn’t the first scandal to have been reported by the Indian media, it was different.

“Probably its scale was defining. It was a game changer," said Ram.

“For Indian journalism, it meant a carefully done investigative story where the main source was abroad. It was very responsibly done," said B.G. Verghese, veteran journalist and former editor of The Indian Express and the Hindustan Times. “It had huge ramifications as no defence procurement of guns has been made since then. There was a paralysis in defence."

Still, the Bofors scandal broke before news in India came to be dominated by 24-hour television and sting operations. Ram isn’t dismissive of investigative journalism today, but he does not endorse the obsessive use of spy cameras. “We were persistent and patient. I would tell journalists, don’t cut corners. Take time."