Eastern parts of India are poorer than those in western region in terms of access to civic amenities, but they are gradually catching up, shows NFHS data

Over the past five years, India has been witness to a silent but important transformation. Household access to civic amenities such as power, clean fuel, toilets and mobiles have gone up sharply, a Mint analysis of data from the National Family Health Survey (NFHS) conducted in 2015-16 and the last census conducted in 2011 shows.

India’s decadal census provides the most comprehensive information on household access to amenities across the country. NFHS, given its wide coverage, is the second best source that helps us understand where the country stood at the half-way mark between census 2011 and the yet-to-be-conducted census 2021. With coverage of more than 600,000 households, NFHS 2015-16 also provides, for the first time, district-level representative estimates of household assets and amenities.

As with most things in India, there are wide variations in access to basic amenities. Access to toilets is very poor in parts of Uttar Pradesh (primarily Avadh and Bundelkhand regions) as well as in parts of Bihar, Odisha, Chhattisgarh and Madhya Pradesh. The rise in access to toilets between 2011 and 2015-16 in these parts of the country has also been very poor. Toilet coverage is high in the extreme south, parts of north-west India, and in the north-eastern states, the NFHS data show. Only flush and pit toilets have been considered here.

Access to clean fuel (liquefied petroleum gas, natural gas, electricity or biogas) for cooking follows an east-west divide similar to the divide in affluence between the two halves of the country.

The silver lining is that parts of the east are catching up now.

The catch up is even more evident when it comes to access to electricity (Charts 2A and 2B). Odisha, Bihar and Assam saw among the greatest improvements in access to power between 2011 and 2015-16, the analysis shows. Yet, access to electricity in these states is much lower than the national average. The analysis has been done using household rather than individual weights, to make the NFHS figures comparable with the household figures available from census 2011. Pulwama and Anantnag districts in Jammu and Kashmir seem to have witnessed the greatest improvements in access to clean cooking fuel over the same period.

Apart from urbanization, education seems to be the other key determinant of access to amenities. Households with educated members are much more likely to have toilets, and have access to clean cooking fuel compared with other households (Charts 3 and 4). 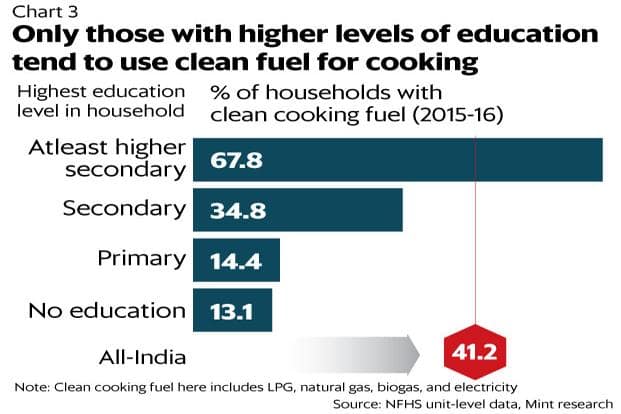 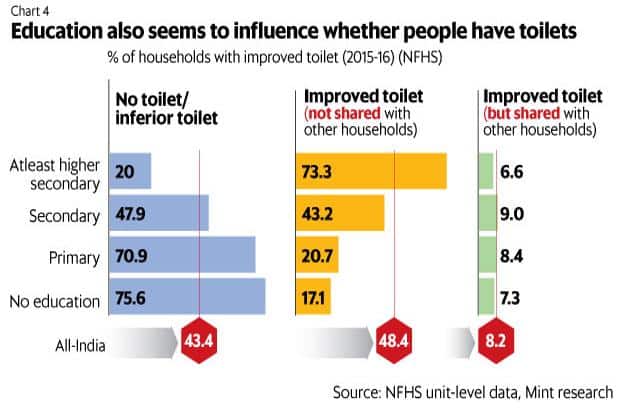 For classifying households by education, the qualification of the most educated member in household is considered here.

ALSO READ | One in 3 Indians own a refrigerator, a fifth own an AC or cooler: NFHS data

This is the concluding part of a four-part series on India’s new geography of wealth.