Winds of change in Odisha?

The recent panchayat elections in Odisha saw BJP winning 297 zilla parishad seats, in a wake-up call to the ruling BJD whose tally fell to 473

Bhubaneswar/Khurda/Puri: On the face of it, Biju Janata Dal (BJD) president and state chief minister Naveen Patnaik still holds sway over Odisha. In the just concluded 2017 three-tier panchayat elections, BJD remained the lead party with 473 zilla parishad seats out of 853.

Dig deeper, however, and the cracks in the BJD edifice are beginning to show. For one, its tally has dropped from 651 seats in 2012. Second, this has come because of a stunning surge in the number of seats won by the Bharatiya Janata Party (BJP)—growing from 36 to 297 zilla parishad seats in the same period.

Given the saffron spread, especially its performance in local level elections across the country, is the unthinkable possible? Can the BJP dethrone four-term Patnaik in the assembly polls due in 2019? The short answer is that it is not impossible. At the least the BJP is replacing the Congress as the principal opposition in the state.

At first glance, Thanapalli, 70km from Bhubaneswar, looks like a picture perfect village—clean, lush green surroundings and away from the buzz of the city. However, the bucolic settings conceal a political build up against the incumbent BJD regime; something that is getting repeated across the state—and worryingly from the point of the view of the ruling party, even prosperous coastal Odisha is no longer impregnable. The village, which falls in the coastal district of Khurda, now has a new zilla parishad member, Anupriya Parida, who belongs to the BJP. Zilla parishad members represent several village panchayats in an assembly constituency.

“People have started thinking about BJP as an alternative to BJD. It was not the case five years back. Congress is losing ground every day, and for 17 years BJD is in power," said 27-year-old Parida, almost capturing the bigger political spectrum in the state in three simple sentences.

Sunita Bahinipati, another winning BJP candidate from Begunia in Khurda district, some 35km far from Thanapalli concurs. The state government has laid water pipes in her village but there is no water for several months, she points out. Water has been a key issue in Odisha in last couple of years and in 2016, 27 of the 30 districts were declared drought hit. “People now want change and they see potential in BJP," she said.

People have started thinking about BJP as an alternative to BJD. It was not the case five years back- Anupriya Parida, BJP’s Zilla Parishad member, Thanapalli village

“We have been supporting BJD for several years but this time we have switched side to BJP. BJD has become very complacent and its local leaders are working only for their own growth," Jiten Parida, husband of Anupriya said in Odia, pointing to a broken tube-well as an example of administrative apathy.

According to Bhainipati, water is the principal demand across villages, besides support for housing and ration cards to tap the public distribution system. And the BJP, sensing a political opportunity, is lending an ear to the people. 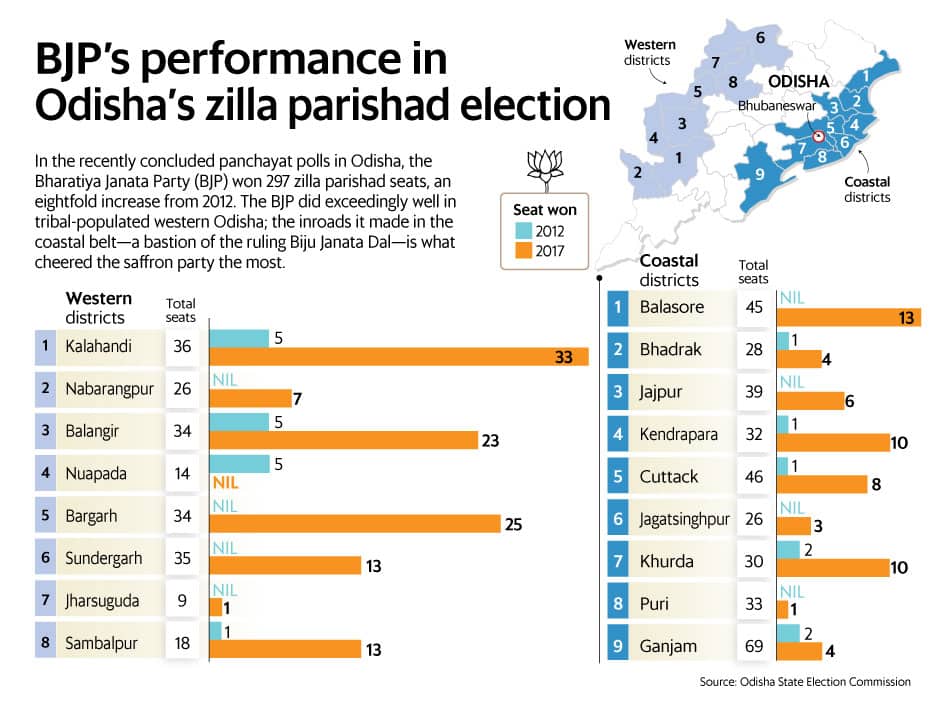 Bhainipati’s husband has also been allotted a petrol pump, a lucrative source of income. In addition, Anupriya is also a recipient of a subsidized LPG connection offered by the BJP-led Union government to people living below the poverty line. The implicit influence of Dharmendra Pradhan, BJP’s chief strategist in Odisha and also the Union petroleum minister, cannot be missed. Material assistance matters. Often it is the difference between escaping poverty or remaining trapped in it.

You will see a big political change in Odisha by 2019: Dharmendra Pradhan

“Modi looks a genuine man...he is thinking about artisans, farmers...we are getting loans from banks to expand our work," said Bipin Das, a pattachitra artist from the famous Raghurajpur village in Puri, where every home looks like an artist’s studio—and it has been like that for a century.

“My brother has got an artisan loan worth Rs4.5 lakh and this is because of Modi...we have voted BJP this time," added Das.

The likes of Bhainipati and Anupriya have two things in common—they are young and have aspirations. To them, status quo is not acceptable. And their enthusiasm is finding support among people like Das, steeped in tradition.

Modi looks a genuine man...he is thinking about artisans, farmers...we are getting loans from banks to expand our work- Bipin Das, pattachitra artist from Raghurajpur village in Puri

Extrapolating the BJP’s performance, dramatic improvement notwithstanding, in the three-tier panchayat elections suggest that the party will still fall short of seizing power in the assembly. But the fact that they can dare to dream of unseating the BJD and that the next assembly elections coincide with the 17th general election in 2019, gives reason to believe that they may be able to work some magic.

In 2014 general elections, BJP managed just one seat—Jual Oram, the Union tribal affairs minister, from Sundergarh, a district in western Odisha. In the assembly election, held simultaneously, the BJP could win only 10 out of the 147 seats in the assembly. And two years earlier, in the three-tier panchayat elections, the party could win only 36 out of 853 zilla parishad seats.

While BJP will still fall short of seizing power in Odisha assembly, the performance in the panchayat elections allows it to dream of unseating BJD in state polls that coincide with Lok Sabha elections in 2019

In the just concluded local elections the BJP upped its tally to 297 zilla parishad seats, completely outclassing the Congress—whose tally dropped to 60 from 126 previously—though well behind the ruling BJD which won 473 seats.

“It is the beginning of a huge change in the political map of Odisha," says Pradhan, before adding, “The poll outcome is a clear rejection of Naveen babu’s government and acceptance of Prime Minister Modi as an able administrator. People have given a significant number of seats from all over the state and you will see the change in next two years. We are ready with our plans and we shall execute them."

What gives Pradhan the confidence is not just the BJP’s success in western Odisha but the sizable inroads inside relatively richer central and coastal Odisha, traditionally a bastion of the BJD.

The poll outcome is a clear rejection of Naveen babu’s government and acceptance of PM Modi as an able administrator... We are ready with our plans and shall execute them- Dharmendra Pradhan

For instance, of the 45 zilla parishad seats in Balasore, 13 were won by the BJP—and the last time it had drawn a blank; similarly in Cuttack, it improved its tally from one to eight seats. The coastal districts of Khurda and Kendrapara has given BJP 10 seats each, compared to three seats combined last time. The significance is so much more because these victories have come in districts represented by prominent national leaders of BJD —Tathagat Satpathy is from Dhenkanal, Jay Panda is from Kendrapara, Bhartruhari Mahtab is from Cuttack and Kalikesh Narayan Singhdeo is from Balangir. BJD is candid about the political setback. “We accept our mistake and will do the course correction," says Amar Satpathy, a senior leader and spokesperson of BJD. “We have to accept that we were complacent; the CM did not campaign and we had lot of rebel candidates as we could not accommodate all aspirants," he added.

However, he was dismissive of BJP has a challenger.

“BJP leaders are loud and they are people of great marketing skill", Satpathy said, adding that BJP took this election with the seriousness of a general election and prepared for it two years back. He has a point.

Pradhan conducted 45 rallies across 24 districts of the state in last 10 days before the February elections. Separately, Chhattisgarh CM Raman Singh and a host of his ministers visited western Odisha and lent their support, like Jharkhand CM Raghubar Das who worked the crowds in districts like Mayurbhanj which fall on the border.

Jatindra Dash, a senior journalist and political analyst in Odisha said, “The indication is BJD’s peaceful days are over at least for now. But is it a verdict against the (otherwise very popular) CM—the answer is may not be."

The indication is BJD’s peaceful days are over at least for now. But is it a verdict against the (otherwise very popular) CM—the answer is may not be.- Jatindra Dash, senior journalist and political analyst in Odisha

It is then clear that the just concluded local elections have thrown up a saffron surprise. Indeed, it is a wake-up call for the ruling BJD. But the jury is still out on whether this will translate into a regime change in 2019 when the state goes to poll along with the rest of the country. For the moment, the BJP has claimed the mantle of being the principal challenger—no mean success.