New Delhi: India on Thursday said it was committed to its agreement with France last year to house two French nuclear power plants at Jaitapur in Maharashtra, despite growing domestic protests against setting up atomic power units. 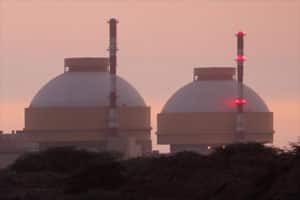 The deal worth €7 billion (Rs 47, 670 crore) was signed during French President Nicolas Sarkozy’s visit to India in December. It was seen as a boost to strategic ties between the two countries. But the project has not made headway because of protests from local communities—first over land acquisition procedures and then over safety issues.

Visiting French foreign minister Alain Juppe told reporters that Indian and French delegations had discussed the issue on Thursday. “We share the view that civil nuclear energy is a reliable source of energy in the future, provided we develop the highest levels of safety," Juppe said. “France is determined to be completely open with its Indian partners on safety measures."

Protests against setting up nuclear plants in India gathered steam after the 11 March earthquake in Japan triggered a tsunami that crippled the Fukushima Daiichi nuclear plant and resulted in radioactive leaks from the reactor units. Tamil Nadu has seen weeks of protests against the Koodankulam nuclear plant being constructed by Russia.

Other issues discussed by Krishna and Juppe included defence and space, the situation in Syria and Afghanistan and the upcoming G20 meet in France in early November.

Krishna noted that Indian and French armies were engaged in their first exercise “Shakti" and lauded Indian scientists who had launched the weather satellite Megha-Tropiques on Wednesday, a collaborative effort between Indian Space Research Organisation (ISRO) and French Centre National d’Etudes Spatiales (CNES).

On Pakistan and its deteriorating ties with the US, Juppe said France was worried about the situation inside Pakistan, which was critical to stablize Afghanistan. “It is absolutely necessary to develop a dialogue with Pakistan," Juppe said, adding that he had proposed a collective security arrangement including all the neighbours of Afghanistan to stabilize the region.

Juppe admitted that India and France had different views on the pro-democracy protests in Syria. “We think in France that the Bashar (al-Assad) regime is losing its legitimacy," the French minister said. “We think the United Nations Security Council (UNSC) should not remain silent on this."

Russia and China had vetoed a European-sponsored resolution against Syria this month. India abstained from the vote. New Delhi has said it is against outside intervention in Syria.

A joint statement released after the talks said India and France had “reiterated their commitment to working together in the G20, especially on global issues notably, addressing the financial crisis," referring to the debt crisis in Europe.