India may push for fast implementation of FTA

India may push for fast implementation of FTA

New Delhi: India is expected to push for fast-tracking the proposed regional trade agreement in services and investment with the Association of Southeast Asian Nations (Asean) this weekend, according to a commerce ministry official and analysts tracking the developments. 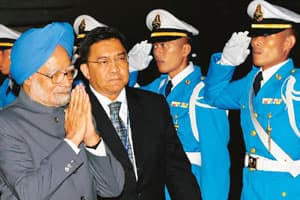 A commerce ministry official said India aims to conclude the negotiations in services and investment within six months. He didn’t want to be named ahead of the summit.

Under the FTA, Asean member countries and India will lift import tariffs on more than 80% of traded products between 2013 and 2016, starting from 1 January.

Before leaving for the summit on Friday, Singh said in a statement India’s enhanced engagement with Asean is at the heart of its “Look East" policy.

“The India-Asean Summit is an occasion to review the progress in our relations with Asean countries. I will inform Asean leaders about the several initiatives that India has taken to qualitatively enhance our partnership in diverse areas of our cooperation," he said.

“The Prime Minister may use this opportunity to further push for a comprehensive economic treaty with Asean. He may emphasise the creation of an Asian economic community," said Rajiv Kumar, director of the Indian Council of Research in International Economic Relations, or Icrier.

Singh also expressed hope the summit would endorse a proposal for establishing the Nalanda University in Bihar as an international institution of excellence in education with a continental focus.

He is also scheduled to hold bilateral meetings on the sidelines of the summit with the prime minister of Cambodia, Hun Sen, the premier of China, Wen Jiabao, and the president of Indonesia, Susilo Bambang Yudhoyono.