The conservative New Democracy led by Antonis Samaras was the largest party with 17-20% of the vote, insufficient to give it an absolute majority and down from 33.5% at the last election in 2009, the exit polls showed. 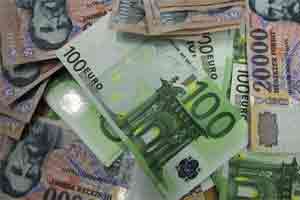 Both Pasok and ND have said they want the “troika" of the European Union, International Monetary Fund and European Central Bank to cut Greece more slack in their two bailout deals worth worth €240 billion.

But with voters angry at the austerity cuts demanded in response, many of the smaller parties, including Syriza, want to tear up the agreements, while the communist KKE party want to leave the euro zone.

The result, therefore, will make it tough for Samaras, once he is tasked to do so by the president, to form a government able to keep its austerity promises and implement more cuts demanded by the country’s creditors.

His other options include a repeat of the current uneasy Pasok-ND alliance or fresh elections. The final results are not expected much before 2000 GMT, and experts have warned they could differ considerably from the exit polls.

“After two years of barbarism, democracy is coming home," said Alexis Tsipras, the head of the leftist Syriza party said earlier on Sunday after casting his vote. “The people will send a loud and clear message to all of Europe."

Pasok head Evangelos Venizelos, a former finance minister who helped negotiate Greece’s second bailout earlier this year, was booed as he voted in his constituency in Thessaloniki, with one heckler shouting “thief".

With Athens having committed to finding in June another €11.5 billion in savings through 2014, any ambition to renegotiate terms “suggests a degree of liberty they do not have," Swiss bank UBS said in a research note.

In ominous comments widely quoted by Greek newspapers on Saturday, German finance minister Wolfgang Schaeuble said that if Greece’s new government deviated from its commitments, the country would “bear the consequences".

“Membership of the European Union is voluntary," he said in Cologne.

As a result, it is Greece’s vote rather than France’s presidential election, also decided on Sunday, which “weighs heavier" on investors’ minds, said Valerie Plagnol, Credit Suisse director of research.

Holger Schmieding, economist at Germany’s Berenberg Bank, said that with a “high" chance that no stable government willing to implement more reforms can be formed, there was a 40% risk of a Greek euro zone exit this year.

Outgoing technocrat Prime Minister Lucas Papademos, head of an uneasy Pasok-ND coalition since November that negotiated the second bailout, said as he voted in Athens that he expected a new government to be formed “this week".

“We are all agreed that these elections are most crucial. Everyone has to make a decision, not just on who will govern but on what path the country will take in the coming decades," the former ECB vice-president said.

Greece has already written off a third of its debts and is in its fifth year of recession. One in five workers is unemployed, its banks are in a precarious position and pensions and salaries have been slashed by up to 40 %.