New Delhi/Mumbai: The Bharatiya Janata Party (BJP) established a simple majority on its own in the Lok Sabha, according to election results on Friday that gave the main opposition party more than five times as many seats as the ruling Congress—buoying the stock markets and the rupee.

The BJP, led by its prime ministerial candidate Narendra Modi, won the Lok Sabha elections, with 282 seats on its own. The alliance it leads—National Democratic Alliance (NDA)—has 336 seats in the lower house of the Parliament.

This is the highest number of seats won by any party on its own since the 1984 Lok Sabha elections, when the Congress, led by then prime minister Rajiv Gandhi won a landslide victory. The 1991 Congress government was a minority one, and the party had just 244 seats in the Lok Sabha.

Modi first acknowledged the people’s mandate with a tweet, and then a public rally in Vadodara. “Good times are coming," said the BJP prime ministerial candidate, adding that “with all and development for all, will be my government’s motto and not an empty slogan"—thus, continuing the development plank on which he contested the general elections.

Sharif spoke to Modi to hail the “impressive victory", a statement said.

If the BJP created one kind of history, then the Congress set another. The party set for its lowest tally in the Lok Sabha ever. The Congress campaign was led by party vice-president Rahul Gandhi.

Modi had predicted that the BJP would win the strongest popular mandate given to any party in 30 years. In 1984, the Congress under Rajiv Gandhi won a two-thirds majority in the Lok Sabha on a wave of sympathy following the assassination of his mother, late prime minister Indira Gandhi.

Modi, the BJP’s campaign leader and prime ministerial candidate, won in both the Vadodara and Varanasi constituencies from where he ran for election to the Lok Sabha.

Counting began at 8am. The 16th Lok Sabha elections, which ended on Monday, saw the highest ever turnout in India for any general election. A total of 551.3 million people—or 66.38% of the total electorate—came out to vote in an election spread a little over a month.

Officials will count the votes in 989 counting centres to decide the fate of 8,251 contestants. More than 550 million votes were cast in the elections that began on 7 April and concluded on 12 May. 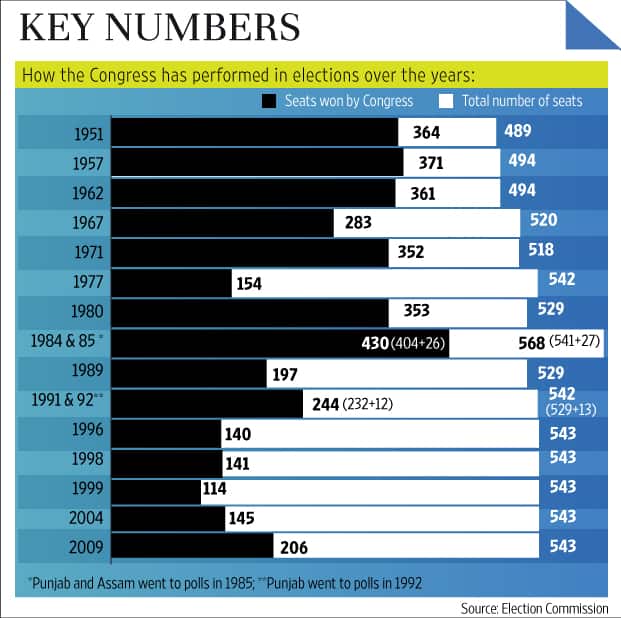 Investors cheered the voting trends. The rupee rallied to a 11-month high of 58.62 against its previous close of 59.29. The rupee has gained 4.85% against the dollar so far this year.

“Market was already expecting NDA to lead and those expectations have been met. Investors had been buying for a while on these hopes, and had added when the exit poll results were announced, and hence, there is some amount of profit-booking taking place at higher levels," said Ambareesh Baliga, managing partner, Edelweiss Global Weath, an arm of Edelweiss Financial Services Ltd.

“Such bouts of profit-bookings are not ruled out in days to come. However, the market now seems to have a clear direction as ambiguity as to elections is coming off," added Baliga.

The Sensex and Nifty have risen 25.51% and 26.5%, respectively, since 13 September, when Narendra Modi was announced as the prime ministerial candidate by BJP. Exit polls had projected that Modi is set to become the next prime minister in a BJP-led National Democratic Alliance (NDA) government.

Twenty-six of the Sensex components traded in the green.

The BSE Bankex and BSE Auto Index also hit a record and was the top gainers among sectoral stocks, with 7% and 3.3% gains, respectively. Top lender State Bank of India was up 7.1%, while private lenders HDFC Bank Ltd and ICICI Bank Ltd were up 6.4% and 7.9%, respectively. Tata Motors Ltd and Maruti Suzuki were up 4.4% and 4.6%, respectively, while Hero MotoCorp was up 3.3%.

Foreign institutional investors (FIIs) have pumped in a net of $1.8 billion in 16 straight sessions ending 13 May, latest data from market regulator Securities and Exchange Board of India (Sebi) showed.​

Yield on India’s 10-year benchmark bond stood at 8.704% compared with its last close of 8.783%. Bond yields and prices move in opposite directions.