New Delhi: The small glass bottle of sugared homeopathy pills on the bedside drawer or tulsi tea as a remedy for cold may be more common than you think. At least one in four Indians, or about 335 million people, believe in alternative systems of healing, according to National Sample Survey Organisation (NSSO) data.

In India, this means using ayurveda, yoga and naturopathy, unani, siddha and homoeopathy, known collectively as Ayush. Since November 2014, there has been an Ayush ministry, but these medicine systems have often courted controversy.

Yoga guru Ramdev triggered a storm by selling a medicine which he claimed would ensure the birth of a boy child. Speaking in Delhi recently, Nobel Prize winning chemist Venkataraman Ramakrishnan called homeopathy a bogus and harmful system.

What do Indians think about these healing systems? 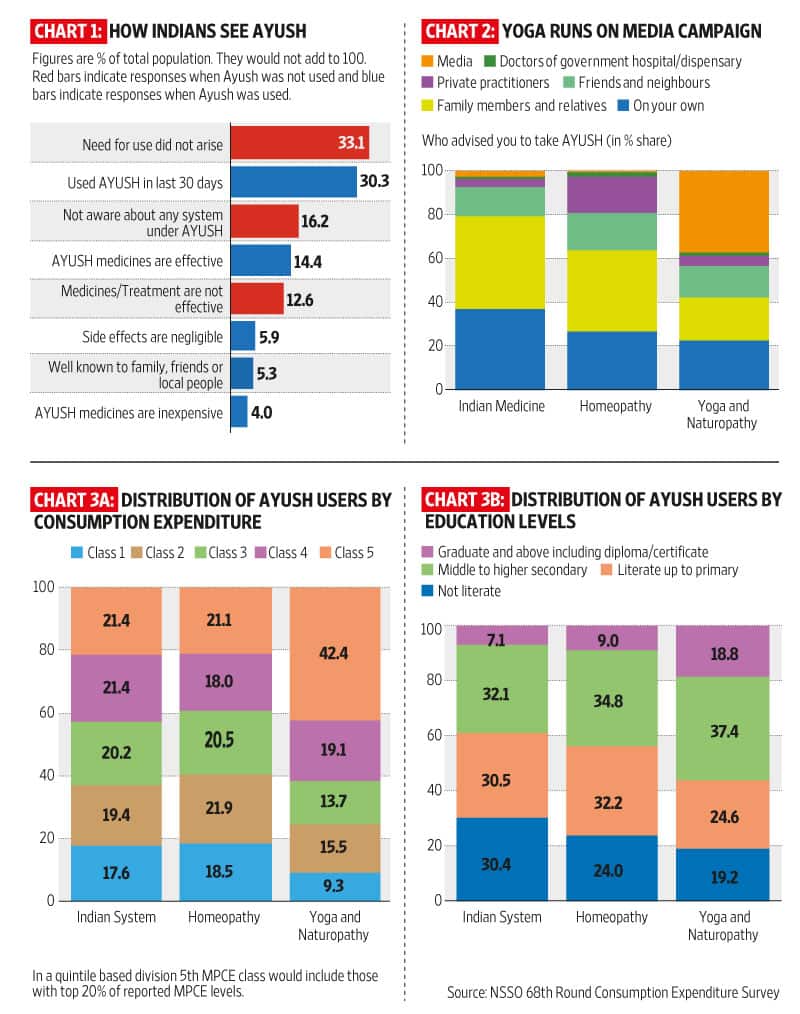 Among those who did not use Ayush, around half said they did not need to (they were not ill). More than two-thirds of those who use Ayush think it is the most effective or has very little side-effects. More than 85% of those who visited Ayush hospitals were happy with the availability and effectiveness of medicines. On the other hand, three in every 10 people in the country are either unaware of any such system or think that such medicines are not effective.

To be sure, the high popularity of these alternative systems does not mean that old-school hakeems or vaidyas are doing brisk business. More than half the users of these systems prepare their medicines themselves by using freely available material or purchasing ingredients from the market. In case of homeopathy, the old practice of the doctor giving the medicines continues. Seven out of every 10 homeopathy users get their medicines from the practitioner.

Homeopathy seems to be more popular in eastern states—West Bengal, Assam, Bihar and Odisha are the top four. Himachal Pradesh and Uttarakhand are ranked second and third by percentage share of people using yoga.

Does religious belief influence the choice of healing systems?

Indian medicine seems to be popular across religions. Close to 80% of those who reported having used Ayush among Hindus, Christians, Sikhs and Jains used Indian medicine. The figure is 70% for Muslims. Homeopathy seems to be more popular among Muslims, 37% of those who used Ayush opted for this. Yoga is the most popular among Jains. One-fifth of Ayush-using Jains practised yoga. Hindus come second with one in every 10 Ayush users practising yoga.

Yoga, the data shows, not only has an upper-caste bias but is also less popular than other systems. Data shows that it loses out in community support. Advice of family and friends accounts for four-fifth and two-thirds of the suggestions for using Indian system and homeopathy. Less than half of those using yoga received such advice. Rather, yoga seems to benefit from media marketing.

Around two people among five using yoga, took to it under the influence of media campaigns. The corresponding figures are less than three and one in hundred for Indian medicine and homeopathy, respectively.

Moreover, yoga’s low popularity might be a result of it being a preserve of the elite. Disaggregating each of the three Ayush systems on the basis of monthly per capita expenditure and education levels of users shows that the rich and educated have a much higher share among yoga practitioners than Indian medicine or homeopathy systems.

The percentage share of the richest 20% and highest educational status (diploma holders, graduates and postgraduates) among yoga users is double compared with that of Indian medicines or homeopathy.

To sum up, non-MBBS healers have their own following. It is not surprising given the lack of infrastructure and personnel in the mainstream (read allopathic) medicine systems. And those who claim yoga to be an integral part of Indian traditions must do a lot more to embed it into popular culture from what seems currently be a hobby of the elite.

Roshan Kishore is a data journalist with Mint and Ishan Anand, a PhD scholar in JNU.