Bangalore: Former Karnataka minister B. Sriramulu, an associate of the mining barons Reddy brothers, won a landslide victory in the Bellary Rural assembly bypoll, signalling that political forces in the southern state could realign. 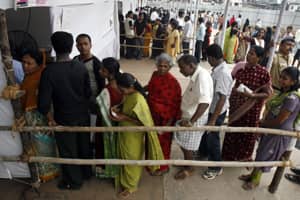 The 30 November by-poll was scheduled after Sriramulu resigned from the assembly following his exclusion from the state cabinet. He was dropped along with Janardhana Reddy and Karunakara Reddy after the trio was named in a report on illegal mining filed in July by the state’s anti-corruption watchdog.

Sriramulu won 74,527 votes, while Ramprasad garnered 27,737 votes and Gadalingappa only 17,366. The victory margin was an improvement over the 2008 assembly elections, when Sriramulu won 61,991 votes against Ramprasad’s 36,275. “Many people have criticized us, calling us goondas (thugs), and talking about the Republic of Bellary. For all those people, this victory is an appropriate answer," Sriramulu said after the result was declared.

The BJP’s failure to put up a good performance despite former chief minister B.S. Yeddyurappa taking on the Reddy brothers head-on during the campaign indicates the ruling party’s weakness in and around Bellary.

Sriramulu said he would now discuss the possibility of setting up a regional party with his aides and Janardhana Reddy. The Reddy brothers may look to formally tie up with either Janata Dal (Secular) and YSR Congress to set up their regional party.

The JD(S) did not put up a candidate in the by-poll and openly campaigned for Sriramulu. Sriramulu also used the ceiling fan as his election symbol—the symbol adopted by the YSR Congress in Andhra Pradesh.

The Reddy brothers and YSR Congress leader Y.S. Jaganmohan Reddy have enjoyed close relations as mining leases were granted to them during the tenure of the late Andhra Pradesh chief minister Y.S. Rajasekhara Reddy.

Despite the loss, the BJP government looks secure for now. In the 226-member assembly, it claims the support of 118 members, including some independent candidates.

The party has been wooing six independent candidates to back the government. Some of them were among those disqualified by the speaker in a controversial ruling last year that was later overturned by the Supreme Court.