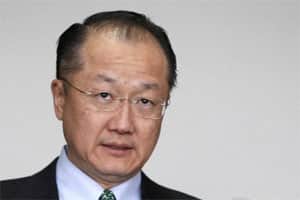 It was the first time in the World Bank’s history that the United States’ hold on the job was challenged.

The decision by the World Bank’s 25-member board was not unanimous, with emerging economies splitting their support. Brazil and South Africa backed Okonjo-Iweala, while three sources said China and India supported Kim.

Kim, 52, who is president of Dartmouth College, will assume his new post on 1 July after Robert Zoellick steps down as head of the World Bank.

“I will seek a new alignment of the World Bank Group with a rapidly changing world," Kim said in a statement.

He said he would work to ensure that the World Bank “delivers more powerful results to support sustained growth; prioritizes evidence-based solutions over ideology; amplifies the voices of developing countries; and draws on the expertise and experience of the people we serve."

Okonjo-Iweala congratulated Kim and said the competition had led to “important victories" for developing nations, which have increasingly pushed for more say at both institutions.

Still, she said more effort was needed to end the “unfair tradition" that ensured Washington’s dominance of the global development lender.

“It is clear to me that we need to make it more open, transparent and merit-based," Okonjo-Iweala said. “We need to make sure that we do not contribute to a democratic deficit in global governance."

Some development experts criticized US President Barack Obama’s choice as lacking the economic and financial credentials needed to respond to the needs of rising middle-income countries, which are still riddled with poverty but which are increasingly looking for innovative ways to finance their development.

The United States said the process was open and transparent, but a number of emerging nations questioned whether candidates were assessed on their nationalities rather than on their merits, as World Bank members countries had agreed in 2010.

The United States has held the presidency since the World Bank’s founding after World War Two, while a European has always led its sister institution, the International Monetary Fund.

Unlike previous heads of the World Bank, Kim is not a politician, a banker or a career diplomat. He has worked to bring health care to the poor in developing countries, whether fighting tuberculosis in Haiti and Peru or tackling HIV/AIDS in Russian prisons.

His training and experience, including directing the World Health Organization’s HIV/AIDS department and developing treatments for a form of drug resistant tuberculosis, gave him immediate credentials as a campaigner on behalf of the poor.

He is also a founder of Partners In Health, which focuses on community health programs for impoverished nations. He earned both his medical degree and his doctorate in anthropology at Harvard University, where he helped set up the Global Health Delivery Project.

South African Finance Minister Pravin Gordhan welcomed the fact that non-Americans competed for the first time, but also said there were concerns the process was not fully merit-based.

“I think we are going to find that the process falls short of that," he said.

As part of their efforts to gain greater say in global financial institutions, emerging economies are also pushing for greater voting power at the International Monetary Fund.

Brazilian finance minister Guido Mantega said his country would not give additional money to the IMF to tackle the effects of the European sovereign debt crisis until the institution showed firm commitment to voting reforms.

Nancy Birdsall, president of the Washington-based Center for Global Development, said it would be healthy if countries made public which candidate they supported and why.

“History was made because there were three candidates," she said. “In the next round it would be good to have more transparency about which board member supported which candidate for what reason."

Birdsall said it would be important for Kim to show early on that he was committed to change by appointing candidates from developing countries to other top posts.